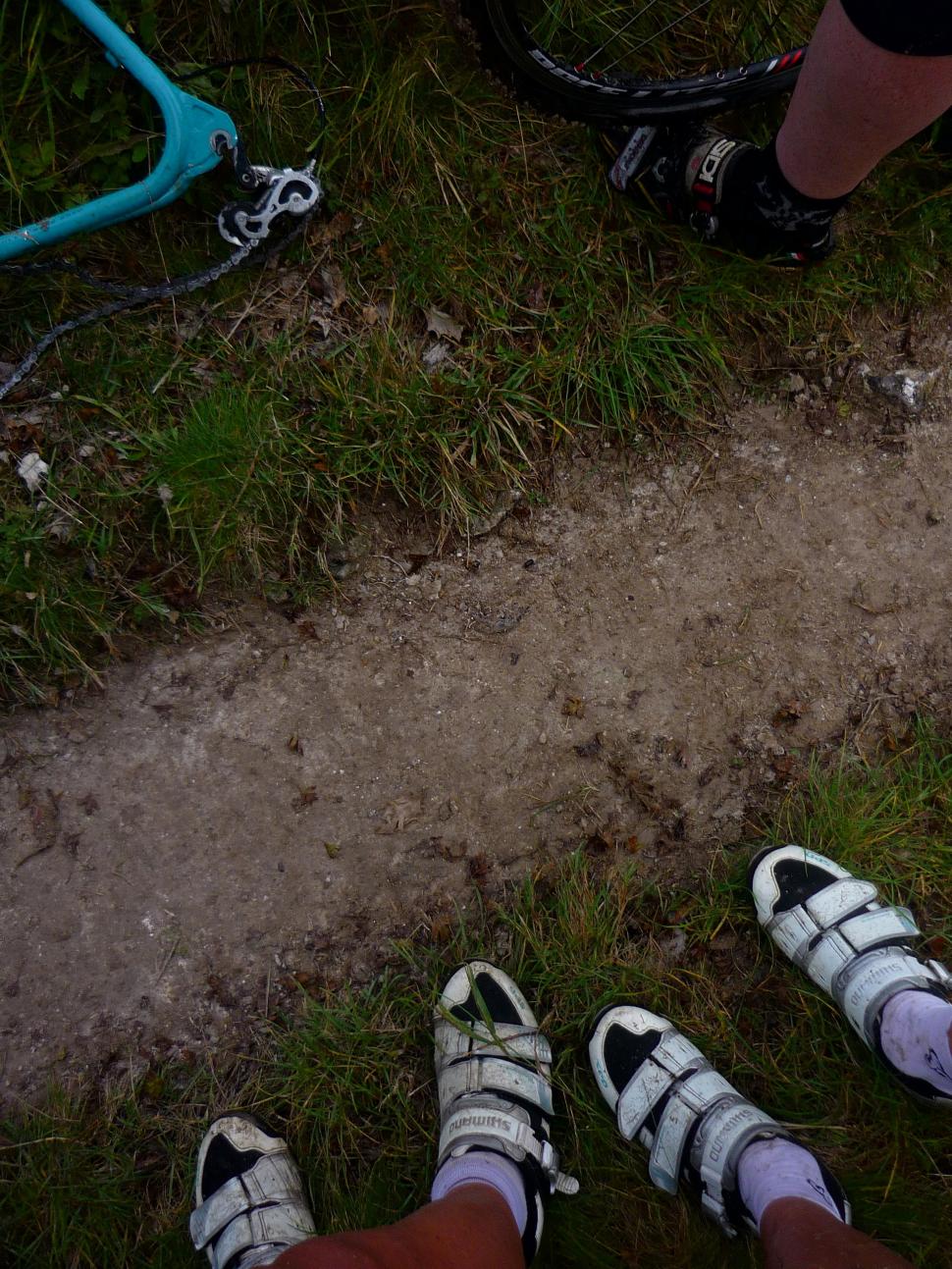 Day 1 of a week of random 'cross bike riding shenanigans with friends and Ride 1 of The New Bike. A spin towards the coffee-shop start of the odyssey and there's a few things that a quick flick round the block on New Bike don't quite reveal; this saddle that was fine on the other bike feels quite pointy on the seat bones now, I need to be sat about an inch further back and the Conti Speed Kings that come as stock are "really quite fast" on tarmac.

Two coffees later, the full grumpetto is gathered and finally off-road those tyres are unrelentingly harsh and shall we say, er, "characterful" on the grease and glip of an Autumn trail and puncture within five sideways miles of off-road giggles.
Sigh.
Although we'll let them off this time as the rear tyre is the random victim of a thorn, the eternal torment of tubes round here. No matter. Whip out one of the two new tubes I've bought special for the new bike and we'll be well away.
It's a Schrader tube.
Ah.
So is the second.
Ah.
There is swearing.
When I reached into the 700x28-38 inner-tube boxes in the bike shop I stupidly assumed they'd be Presta valves, well, because they always are aren't they? I mean who in their right mind uses that size tube with a fat valve eh? Hybrid users it would seem. They can't even decide what tube they want to be either.
Swearing.

Luckily the Tube Fairy steps in with a rightly-valved replacement and we're across fields, up and down hills, along tarmac and trails on the wrong bikes for every situation. Excellent. All good fun and worthy of earned hot restorative beverages and munchies in the next town. As we drain cups and wipe plates clean with fingers The Weather has arrived and by the time we're back up on the hill a cold thick wet duvet of mizzle smothers the world. Chatty gently riding up into the cloud my front tyre explodes with a reassuringly resounding bang-hiss and I'm instantly punctured to a stop.
How the....?
There is swearing.
Poking around the edges of the trail reveals the "Arrowhead Grade"™ flint that has caused the inch gash in the side of my tyre.
There is more swearing. Of the astonished kind.
The Tube Fairy flutters forward once more and not only offers me a spare tube but a tyre-boot of a section of old toothpaste tube. Good fairy.
Fix, mend, faff, pump. Go.
Stop.
50 yards further on and the Tube Fairy has unfairly gained negative karma and punctured.
There is swearing.
This hole is patched hiding in the lee of dense bushes as The Weather has really muscled up with fatter drizzle and gustier wind - perfect weather to be blighted with punctures then. Necks get drawn into shoulders, jackets get drawn out of pockets.

We are depleting now and press for home the quickest and most puncture resistant way. Though this still involves running the gauntlet across fearful tracts of now wet chalk - the most friction free substance known to man, and his tyres. Riding along it is dangerous, putting a safe foot down on it is treacherous and it can slam you hard on the deck soon as grant you upright passage, surviving it is 99% luck and 1% prayer.
One of us has never experienced the joys of damp chalk and watching him perform the spastic giraffe of twitching a 'cross bike up the slippy trail is not the most enjoyable losing of a virginity I've ever seen, but possibly the most comical.
There is swearing. Of the more muttered kind.

We drop into town and away from The Weather with thankfully meagre incident and warm our souls with traditional post 'cross ride hot-chocolates before the final homeward stretch where as a joyous epitaph to the day we play British Bulldogs with a bruising shower, and lose, obviously, only for the sun to come out in full Magic Light glory as soon as the front door is opened.

I change the tyres immediately.