VecchioJo cherishes the old and baggy.

“It’s alright thanks, I’ve got one”

I forget how many times I’ve had that interchange, because it’s been most every day. At least once. For years. Long before re-using a bag to go shopping was the eco-lip-service thing to do, long before shops charged for bags, and long long before courier-bags were the hipster thing to have I bought this bag. Like many people that get around by bike and just do things on two wheels I simply needed a big old bag to swallow a whole bunch of the day-to-day - a lock, spare tube, multi-tool and hat as permanent residents, and on top of that anything that might be needed to take along or be picked up, books, food, clothes, post, everything else. Stuff. I’d tried a rucksack and it was uncomfortable and kept hitting the back of my head, I’d tried pannier bags but they were awkward two times over to lug around the shops. So a courier-bag it had to be, or a Timbuk2.

Back then you didn’t buy a courier-bag you bought a Timbuk2, just like no-one buys a vacuum-cleaner, they buy a Hoover. They were about the only company at the time you could go to for such a bag, that would be a while ago then, long before the competition turned up with all their added extras and cool trendy value-added features. It’s a pretty basic bag, and all the better for it, just a big waterproofed gaping sack with some pockets. Three on the inside; pens, driving license, sister’s front door key, lipsalve. A zipped one on the outside with a sleeve behind it. Keys and wallet in the zip pocket, sugar sachets over-grabbed from coffee shops in the compartment behind, always useful. And a handy pouch for the bike-lock key on a lanyard to plop into. 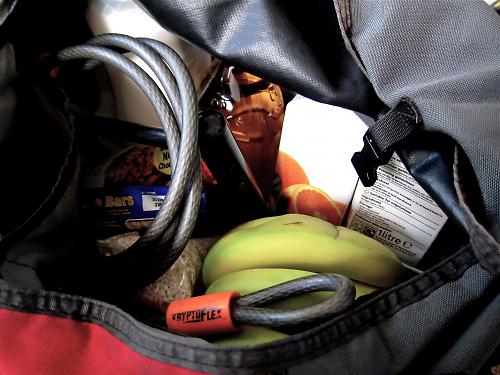 Most every time I’ve left the house this bag has been slung over my shoulder, on a bike or not. So much so that the physio I had to see once to be kneaded back into shape knew I owned a courier-bag just by looking at a crooked me trying to stand up straight, and knew which side I carried it on. And told me off. Anyway, the large majority of the things in my life have come into it via this bag. Some has left. Food, clothes, music, books, magazines, bike parts, coffee. I instinctively know just how much shopping I can get away with buying to fill the bag, and know just how to pack it so it’s comfortable and balanced on the way home without a tin of beans digging in the right kidney or the corner of a box of cat food sachets elbowing into a vertebra. Aside from the everyday overloading with the practiced one-move lift and jerk and swing over the head and onto the back, the clicking in of the tension strap and the body wiggle to get it settled, it’s had its fair share of inappropriate loads. Pairs of wheels to be trued by the bike shop, remembering in traffic that the bag’s cargo is now wider than the handlebars, and frames to have headsets squashed in. Boxes from the parcel depot significantly bigger than anticipated. A 6-slice Dualit toaster. That was a painful four miles.

Apart from the aftermath of The Washing-Up Liquid Incident I can’t recall if it’s ever been washed, which probably shows, although all the rain it’s hoiked through has probably washed off most of the sweat it’s absorbed. It does have regular purges to keep the weight down though; receipts, tickets, bottle tops, elastic bands, bits of paper with phone numbers written on, the odd business card, contact lens pods, bread crumbs, a valve cap and some confettis of rice from that bag which split. There’s that half a pencil with the ever-so-handy but never ever used length of Gaffer Tape wrapped round it. That biro that doesn’t work, one of several. A pin-badge. Some tissues from that café. The dog-eared bit of paper with the poem on. 2p. All removed and then put back in because they’re part of the bag. 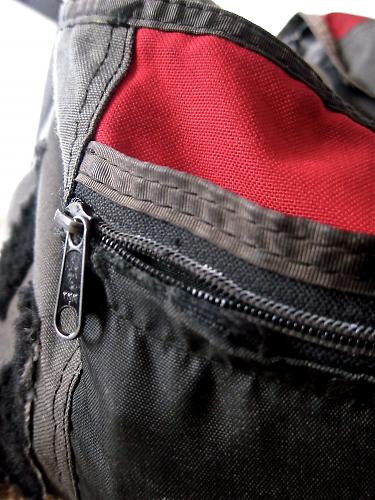 I’ve had the bag for not quite half of my life, I’ve definitely had it for over half my cycling life, so it’s acquired quite some palmares. It’s not just racked up cycling miles in and out of town and to and from the shops either, as a large and adaptable manbag it’s been in the boots of cars, stuffed into overhead lockers in planes, rattled around in the muddy backs of vans, sat on my lap on overcrowded trains, and squished under my legs on coaches. It’s only managed halfway round the world in one go but it must have been around it several times in cumulative miles. Sitting on a latenight train, off a delayed plane, looking at the bag slumped in the seat opposite I get to tired idly wondering how many thousands of pounds of bike bits it’s transported, how many kilojoules of food, how many hours of pleasure has it brought to me, the bag big enough to hold a vinyl 12” without creasing the corners. Or a whole rack of CDs. All those magazines. A library of magazines. £15 of race winnings. 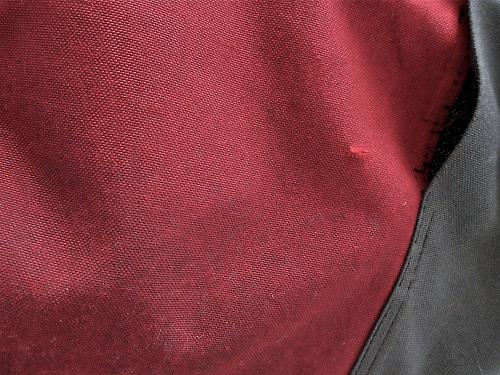 But I’m increasingly feeling that it might be time to invest in a new bag. The zip has a few broken teeth and sticks just there so it can sometimes be an embarrassing tug to try and get the wallet out at the till, but it’s been like that for a couple of years now. The stitching on the bottom is starting to unravel a bit and the left-hand Velcro tab is coming undone as well. One of the reflective tags has disappeared, that went ages ago, and the yellow one that’s left isn’t the original anyway. But there’s still life in this old dog yet, it’s not ready to be put down. Every time I think about buying a new bag I falter. It wouldn’t be this bag, it wouldn’t be moulded to me, it wouldn’t have the patina of my life’s silt, it wouldn’t have that smear of blue paint on the inside, it wouldn’t have those miles, those stories. It wouldn’t be instinctive. Where can I buy a new bag with at least a decade of life in it?