Tales of a 10-speed racer: how getting a Raleigh for Christmas changed my life 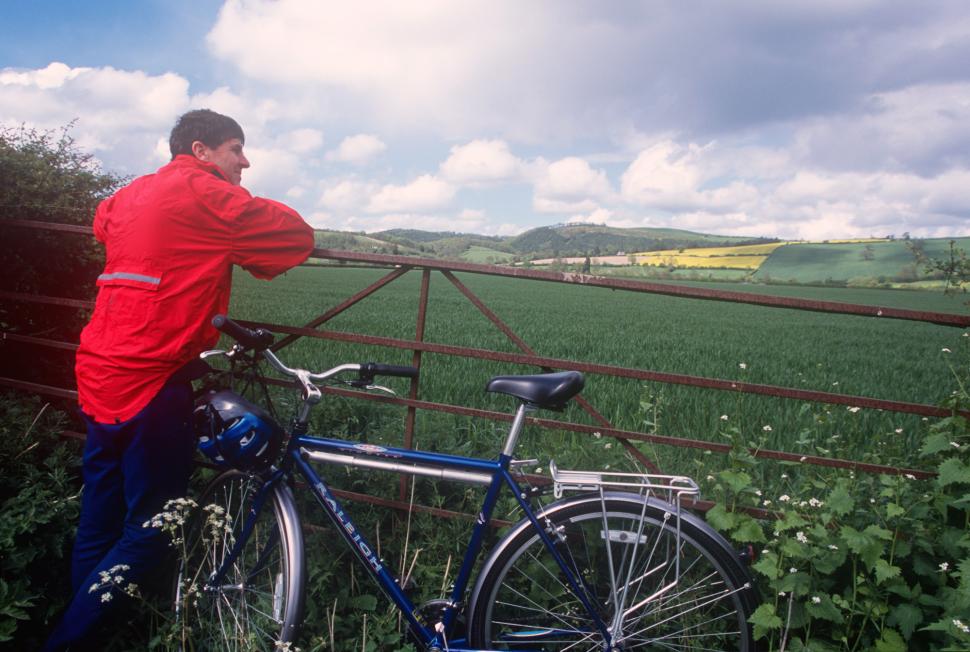 Christmas morning 1977 was something of a bittersweet occasion for the 12-year-old me. In the kitchen was a cardboard box covering up my Christmas present: a brand new 10-speed Raleigh Europa racing bike, which was the sweet part of course.

Unfortunately there was also a bitter taste in my young throat, because I would have to give up my beloved purple Chopper in exchange for this bright red contraption that came wrapped with the gold and black bands of the TI-Raleigh racing team. Paul McCartney and Wings were blasting out of the radio with their questionable Christmas number one Mull of Kintyre, which didn’t help to sweeten that blow! Just like any other young boy of the 70s who happened to have one, I loved my Chopper more than just about anything else in the world.

That death trap on two wheels had been with me throughout the faded decade of flared trousers, Oxford bags and Rollermania, and had been pushed and ridden for many a mile over terrain that I’d think twice about tackling even today. Raleigh was a household name back then, the quintessential British bike brand, and the only real bike manufacturer of note to the layperson. It was often said they were the biggest bike manufacturer in the world back then; although the roadster-making Hero of India might have contested that. 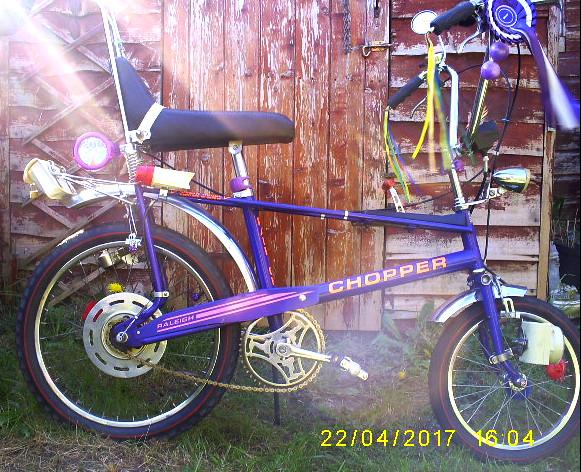 Not Steve's actual Chopper, but one very similar!

I was about three or four years old when I first learned to ride solo on two wheels, and even to this day can still remember that split second sensation of fear and elation as I realised that my dad wasn’t actually holding the saddle any more. That was on a friend’s balloon tyre bike, and soon after, when birthday time came around, I was proudly escorted to the local bike shop where I became a grinning owner of a metallic sky-blue Raleigh Gresham Flyer. This is the bike that led me towards the mighty Chopper, a few years and a few inches taller later.

The decision to take away my purple dream machine was down to my dad, who had decided that I was too old for it, and that I should have ‘a more grown-up bike’. Through my older brother we could get a family discount on Raleigh bikes, so I had the brochure put in front of me.

I was pointed firmly towards a sky blue Raleigh Arena, and almost gave in to that parental pressure; however, there was also this boldly-coloured Europa in the brochure, a cheap and cheerful replica of the Ti-Raleigh team bike. 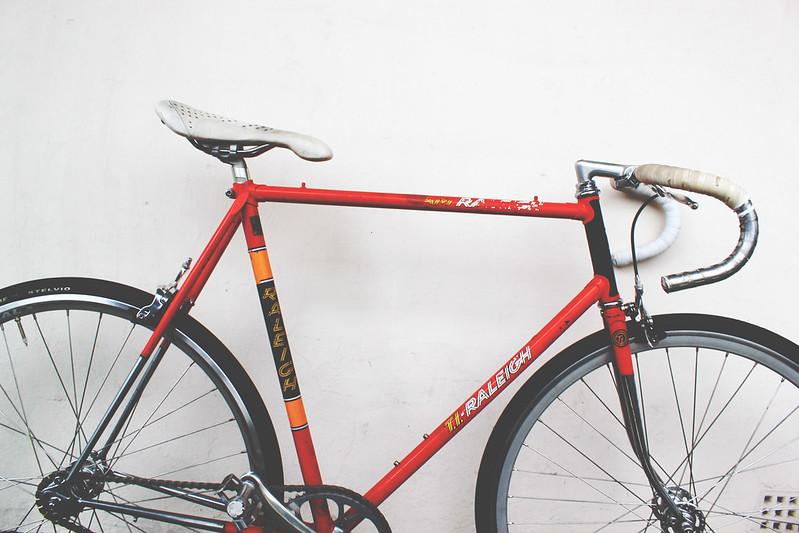 There were also a couple of pictures of the famous (but not to me) TI-Raleigh racing team in there, all decked out in woolly shorts and matching kit with the peaks on their caps turned upwards. I’d never seen anything quite like it… and why would I have? Cycling and bike racing were totally unknown to me, and most other Brits for that matter. And yet, there was just something about it, or at least those photo. Hidden somewhere in between the glitz of that bright coloured bike and foreign obscurity, and mystery of the racing team, was intrigue. Reluctantly my parent caved in, and that’s what I was given for Christmas… little did I know at the time, that this bike would change my life forever.

There was zero sporting interest or intent within my average working class family, until that day. Those pictures of men in red, gold and black had my attention, and around about the same time a Raleigh TV ad featuring Noel Edmonds also came on TV. It was a cringeworthy ad, but at the end of the advert a Raleigh team rider, Cees Priem, rode past him and said: “I ride Raleigh for a living.”

Riding a bike as an actual job was a whole new concept to me, I’d never heard such a thing. In a schoolboy dream kind of way, the seeds were sewn. I decided there and then that I wanted to be that guy, the one in the TV ads and in the brochures, and the one being paid to ride a bright red Raleigh bike. Of course, such things didn’t happen to kids like me, but at least I had a dream, albeit an extremely unacceptable and misunderstood one to the rest of society in the UK at that time.

From there on in my life took a very different path to anyone else around me, and was way off-piste compared to any of my friends. Cycling became an obsession, and every spare minute I could steal was spent on that bike, blindly chasing a dream; that impossible dream that it seemed I had little hope of achieving.

The TI-Raleigh team was all-dominant back then, winning most of the classics and the Tour de France in 1980; although the only real connection to Britain was the bike brand. There were just a handful of rebellious Brits who’d cracked the French dominated pro cycling system at that time: Graham Jones, Robert Miller, Paul Sherwin and Sean Yates among that select few, along with the already well-established Barry Hoban.

Few got the opportunity to chase that continental racing dream. Only the most gifted and determined, who were independent riders of a different breed to those of today, had a chance. Nevertheless I chased it in my own way, although circumstance, opportunity and ability didn’t come together to bring things to fruition. 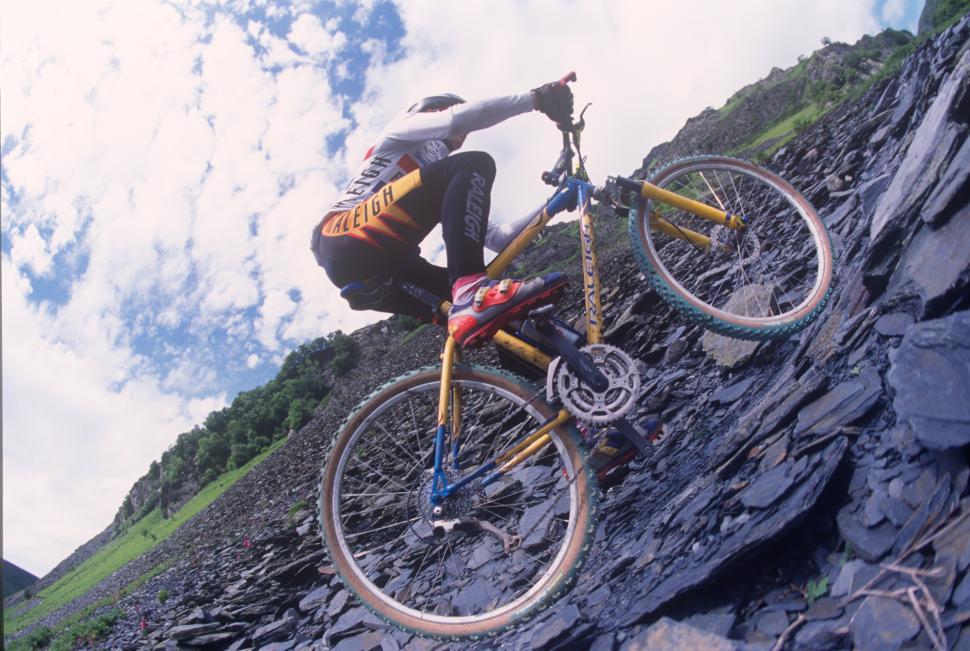 Fast forward a few semi-enforced years out of serious riding, I found myself once again chasing bicycle dreams, although I had no idea what they were by then. Long gone was the mighty TI-Raleigh team, and mountain biking had just started to become popular in the UK. Somehow or another it seemed that my “Eddy The Eagle style” and approach, and my plans to go forth and do extreme things on a bike also appealed to Raleigh, and I found myself riding for a decade under their banner.

Raleigh as a company had gone through a lot of changes during the previous years, a trend which was set to continue and gradually sap the lifeblood out of their former market dominance. The once traditional world of bike building had undertaken a drastic shift eastwards towards outsourcing, a direction enforced on much of the British manufacturing industry, A wave of new and trendy American brands were also taking a hold on the reins of cool when it came to mountain biking, which didn’t bode well for an ‘old school’ brand such as Raleigh.

During that period I spent a good deal of time at what was then the ‘Raleigh Kingdom’, which covered a substantial patchwork of real estate in Nottingham. Within every building you could sense that reverence and history, a grand legacy that was perhaps also a part of their decline. The new brands were less traditional in their approach, whereas Raleigh was very much set in its ways; good old solid bikes for all the family, their crusty bread and salty butter business from the get-go.

During the 90s I was fortunate enough to feature in a Raleigh TV ad, in brochures and on posters, while pedalling my way up and over lots of extreme terrain, mostly on Raleigh bikes and with their support and blessing. I pretty much had my own book with blank pages and a pen in it. On reflection I guess I was actually living out that schoolboy dream, but in a very different way than I had imagined all those years before. Those glory days may be long gone for all; but oh how I would have loved to have seen Team GB aboard Raleigh bikes, and Sir Brad win that 2012 Tour de France riding a red, gold and black Raleigh team machine! 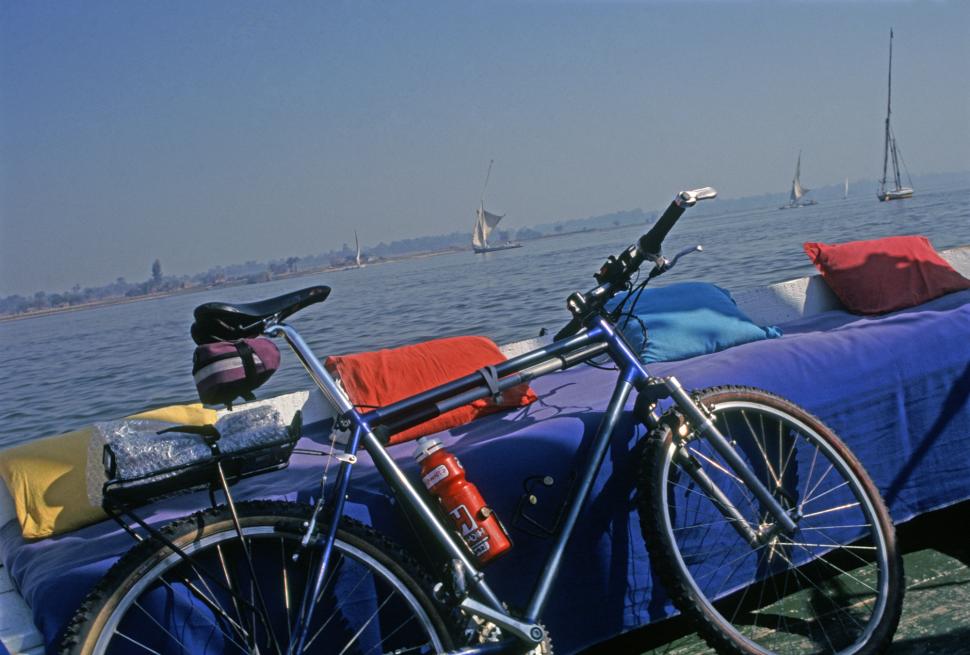 All these years later and I still get goosebumps when watching videos of those hazy days when Zoetemelk, Knetemann, Raas, Kuiper and co ruled the pro road racing roost, aboard gleaming Raleigh bikes that were built in Nottingham. Only now, on reflection, do I wonder how things would have played out for me had I succumbed to that blue Arena bike. I’m quite sure that had I done so I wouldn’t have taken up cycling, which would have drastically changed the path of my life. This really does go a long way towards proving the value of icons and a brand, not to mention the power of a bike for Christmas.

Thank you Raleigh, for helping one schoolboy chase his dreams. And thank you Apple for not inventing the iPhone earlier…

1
Cyclist's severed foot found on hit-and-run suspect's car as driver arrested
2
Near Miss of the Day 794: Driver passes cyclists signalling right — police suggest riders should have turned quicker
3
"Someone could be killed": Path users blame speeding cyclists for New Forest danger
4
"They said give us the bike or we stab you": Another cyclist targeted by motorbike-riding muggers on popular route out of London
5
"On fire" Geraint Thomas "best I've ever seen him", according to Rod Ellingworth
6
New Giant Propel to debut at Tour de France
7
Moriah Wilson murder: Kaitlin Armstrong caught in Costa Rica after six weeks on the run
8
Near Miss of the Day 792: National Express bus driver in ultra-close pass on cyclist (includes swearing)