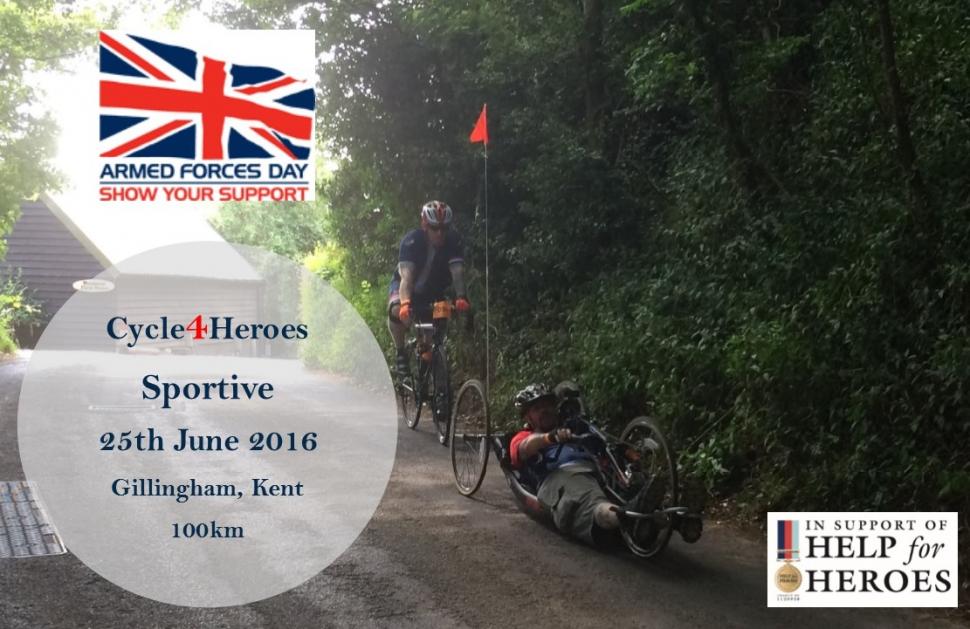 Join us for a 100km ride around Kent on Armed Forces Day.  The Cycle 4 Heroes Sportive challenge is being organised in support of Help for Heroes and sets out from the home of the Royal Engineers in Gillingham.  The 100km route is the perfect distance for a Saturday morning ride for serious and recreation cyclists alike.

Our new route heads out of the town, through the cathedral city of Rochester towards the Hoo Peninsula where the quiet lanes await.  The terrain has its undulations but early on the water’s edge is close and there are just a few hills to overcome.  The latter part of the ride features the Leather Bootle Inn in the picturesque village of Cobham where Charles Dickens was one of the regulars.  Vigo and West Malling also feature before heading into Aylesford which is home to 12th century priory.  Following the River Medway to Rochester we retrace our cycle tracks to the finish where a warm welcome awaits you along with a well-earned finisher’s medal.

Armed Forces Day is celebrated around the UK in many ways and it is no coincidence that Cycle 4 Heroes is on the same day; we planned it that way!  As well as a great cycle ride to take part in, there is the added attraction of the of a huge Armed Forces Day parade happening just a few pedal strokes away.  Bring family and friends and whilst you ride, they can enjoy the spectacle and attractions at the parade.

Enter early for your chance to win a Tinkoff Saxo jersey signed by Sean Yates.