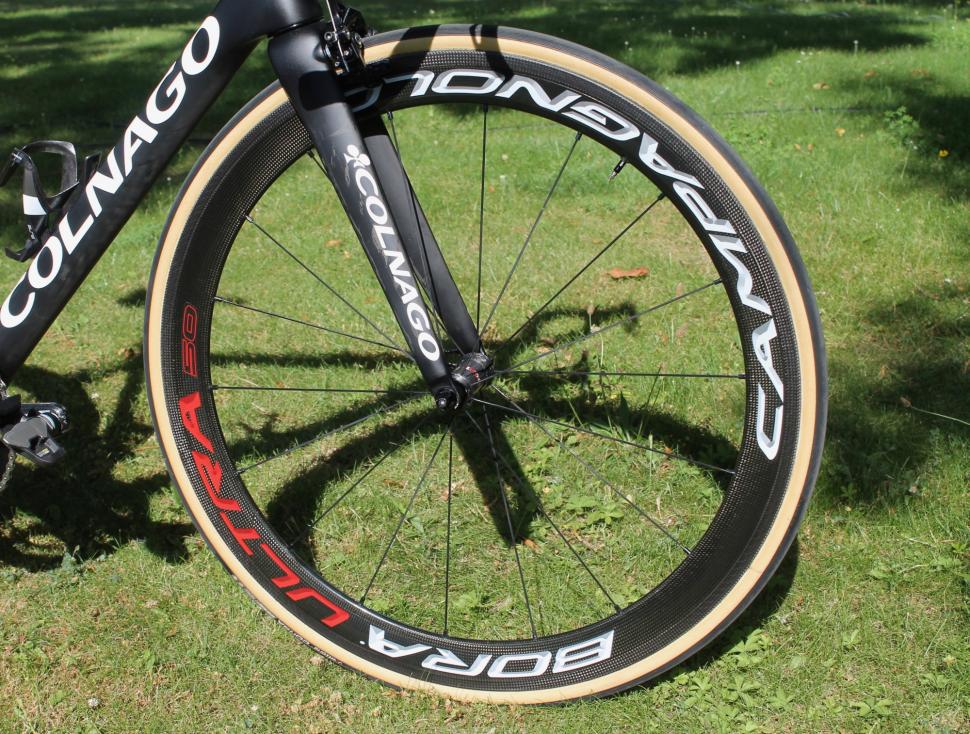 Wheels of the Tour de France

Some wheels used in the Tour de France are designed to be lightweight and some have a focus on aerodynamics, but one thing they have in common is that they're all intended to offer a competitive edge. Here are some of the most noteworthy that we've spotted in this year's race. 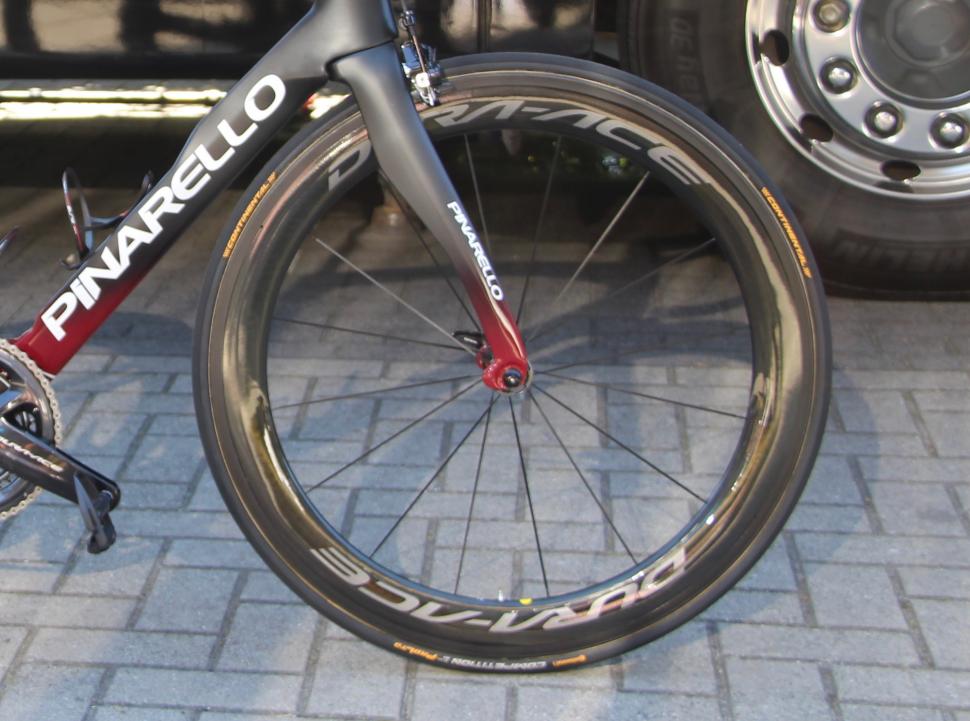 Team Ineos uses wheels from Shimano most of the time. This is a Shimano Dura-Ace C60 on Geraint Thomas's bike, for example; the claimed weights are 666g (f) and 830g (r). The rim is 60mm deep and 28mm wide.

Check out 37 of the best road bike wheelsets 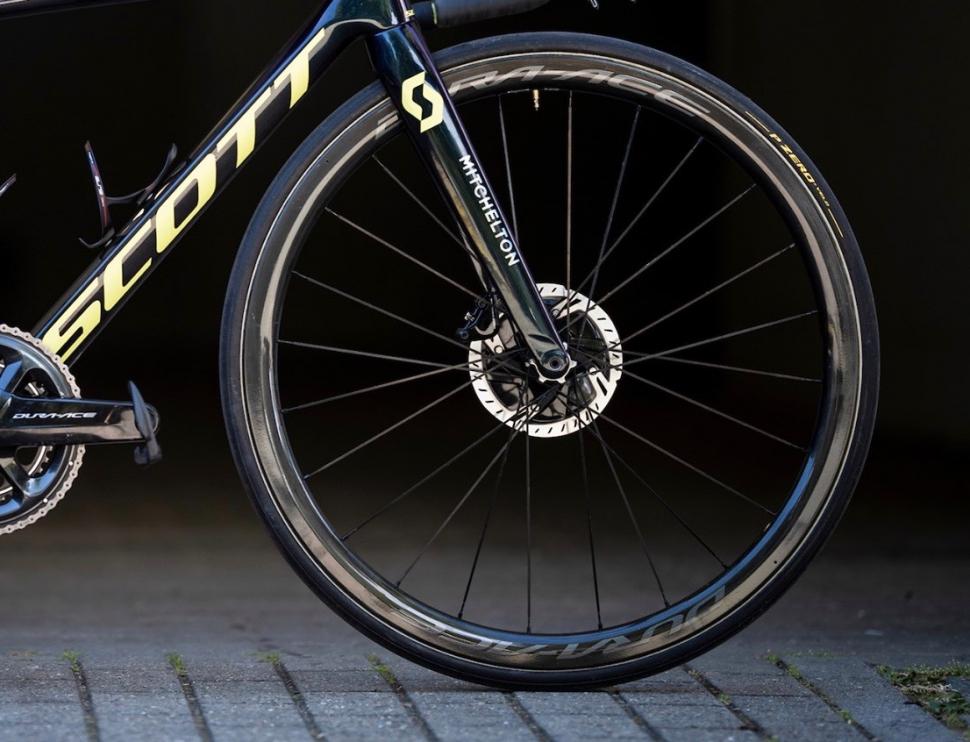 Simon Yates of Mitchelton–Scott has C40 Tubular Discs on his Scott Addict RC. Despite its name, the rim depth is 37mm. The C40s are a little lighter – 609 (f) and 763g (r) – for quicker acceleration.

Team Ineos has also used Lightweight Meilenstein wheels for the first time in this Tour de France. These ones fitted to Ergan Bernal's bike have claimed weights of just 475g (f) and 630g (r). 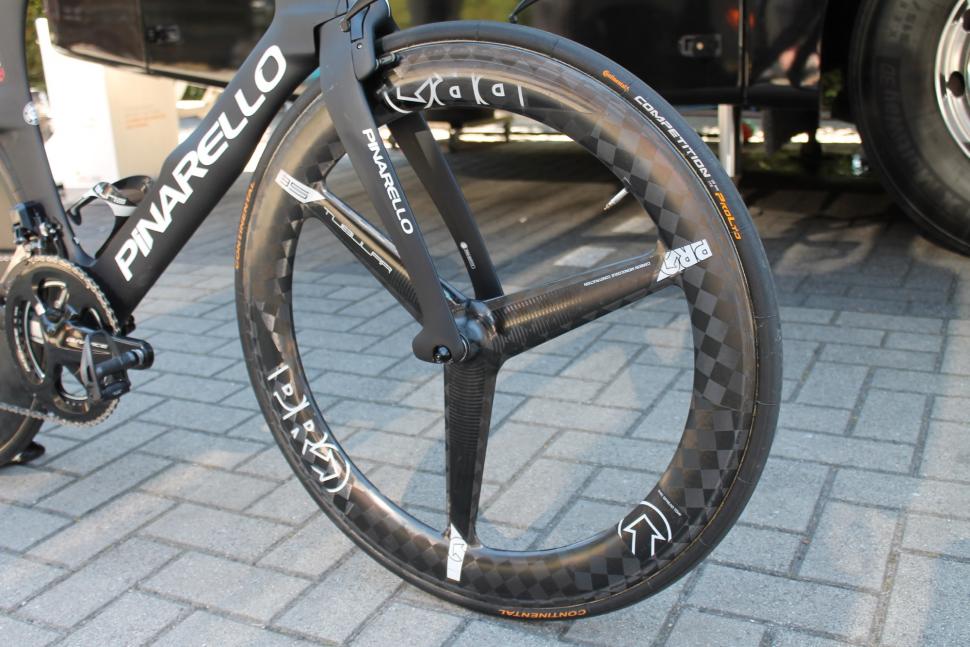 Shimano provides Ineos with Pro Textreme wheels for time trialling. Thomas uses a 3-Spoke Textreme Tubular at the front. It's made from spread tow carbon, where ribbons of carbon fibres are woven together, the idea being to reduce crimp and thereby improve the mechanical performance. 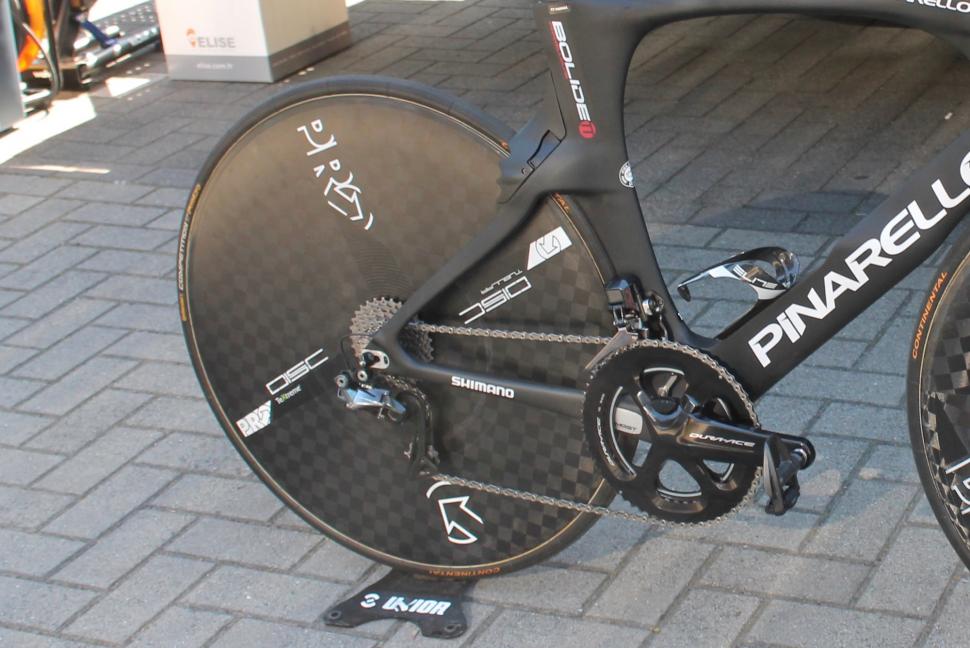 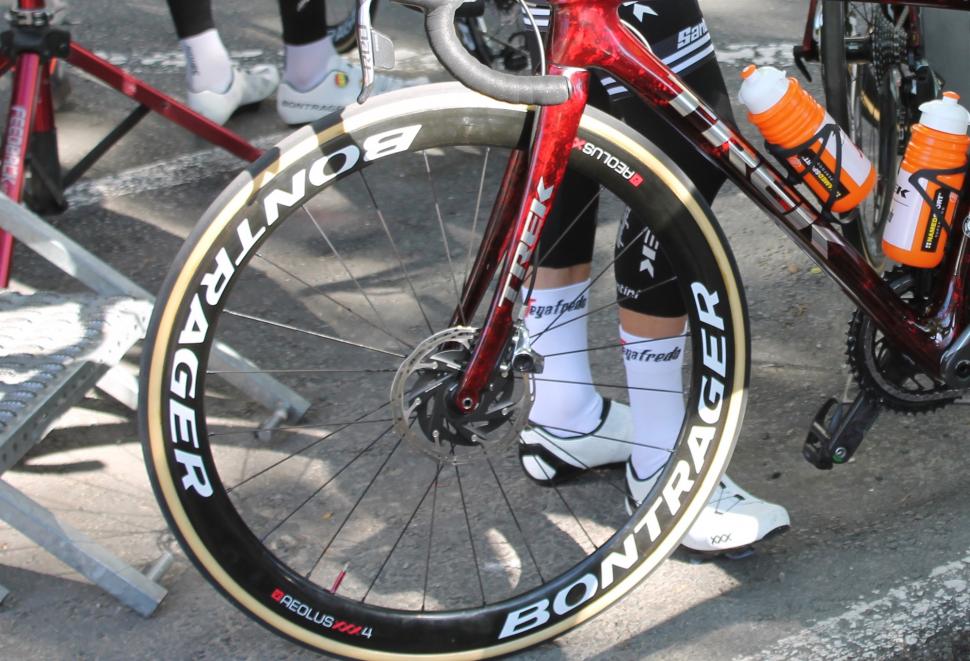 Peter Sagan's bike is fitted with the Roval CLX 64, which Specialized claims is "the fastest spoked wheel in the world".

"It induces less drag than most 80mm-deep wheels and weighs a half pound less than other aero competitors," says Specialized.

This wheel features CeramicSpeed bearings and the rear has DT Swiss 240 freehub internals. 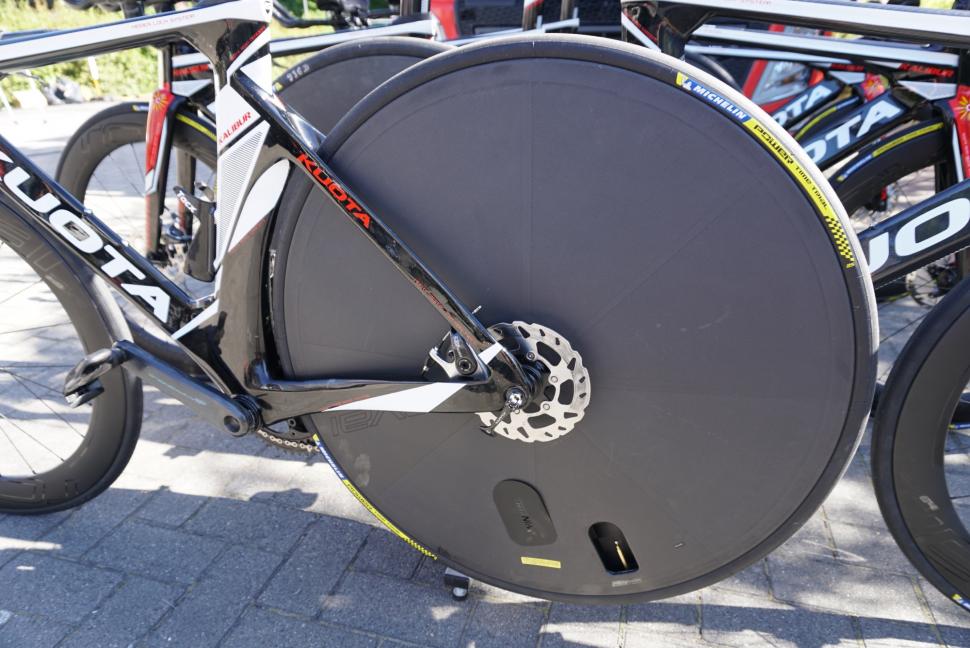 Roval says that the 321 Disc on the back of this Kuota Calibur TT bike, ridden by Cofidis, is the most aerodynamically efficient wheel ever made. It's a lenticular shape on the non-driveside, meaning that it bows from the hub to the rim. 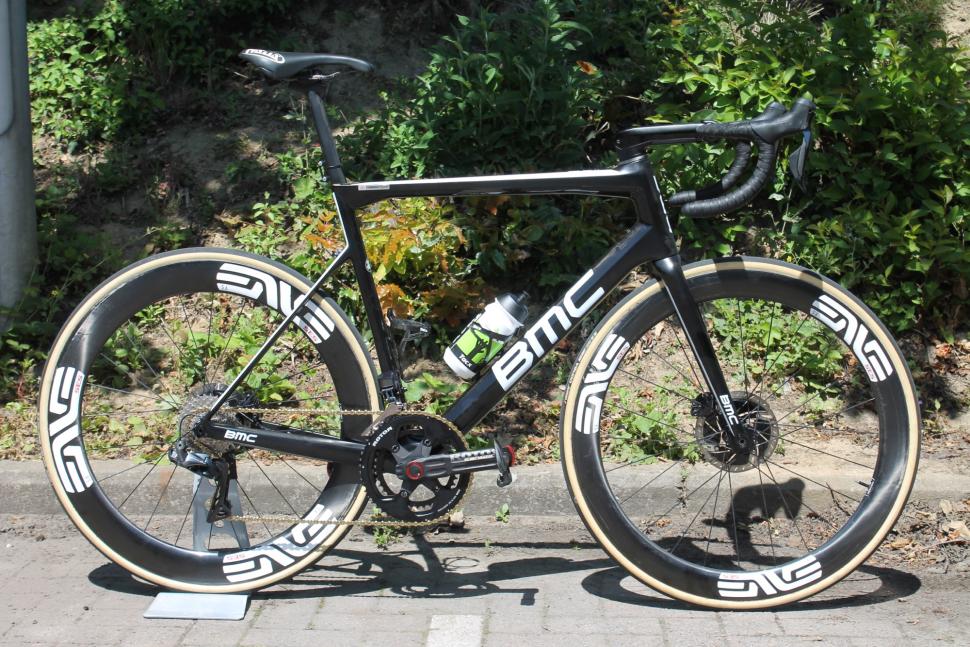 Dimension Data uses wheels from US brand Enve. You can see that the two rims on Steve Cummings' 5.6 Disc wheelset are different depths: the front is 54mm deep and the rear is 63mm. It's the front wheel that has most influence on a bike's handling – your steering can be affected if it's caught by a crosswind – hence the shallower depth.

Enve sees the shift from rim braking to disc brakes as an opportunity to improve aerodynamic efficiency.

"The elimination of a braking surface opens up the realm of aerodynamic and structural possibilities," says Enve. "When you don’t have to engineer a flat braking surface and manage high temperatures from braking, you can reduce the rim’s weight, adjust shape for improved aerodynamics and provide better tubeless performance." 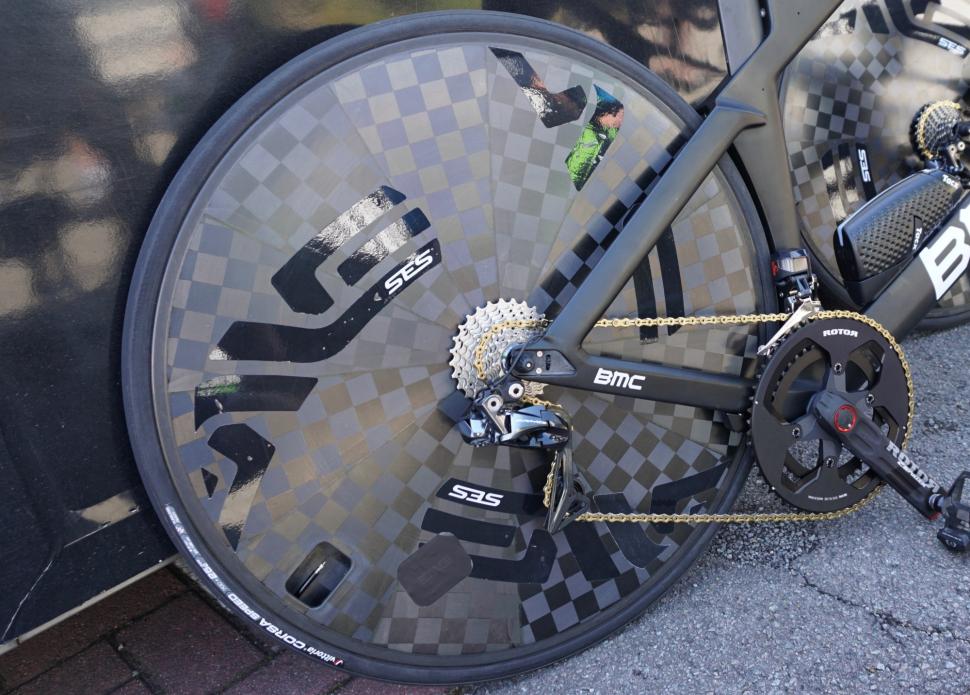 Enve claims that the SES Disc is the fastest rear wheel available (which is the same claim that Roval makes for its 321 Disc and that Zipp makes for its Super-9).

Like other SES wheels, it was developed by consultant aerodynamicist Simon Smart of Smart Aero Technology. 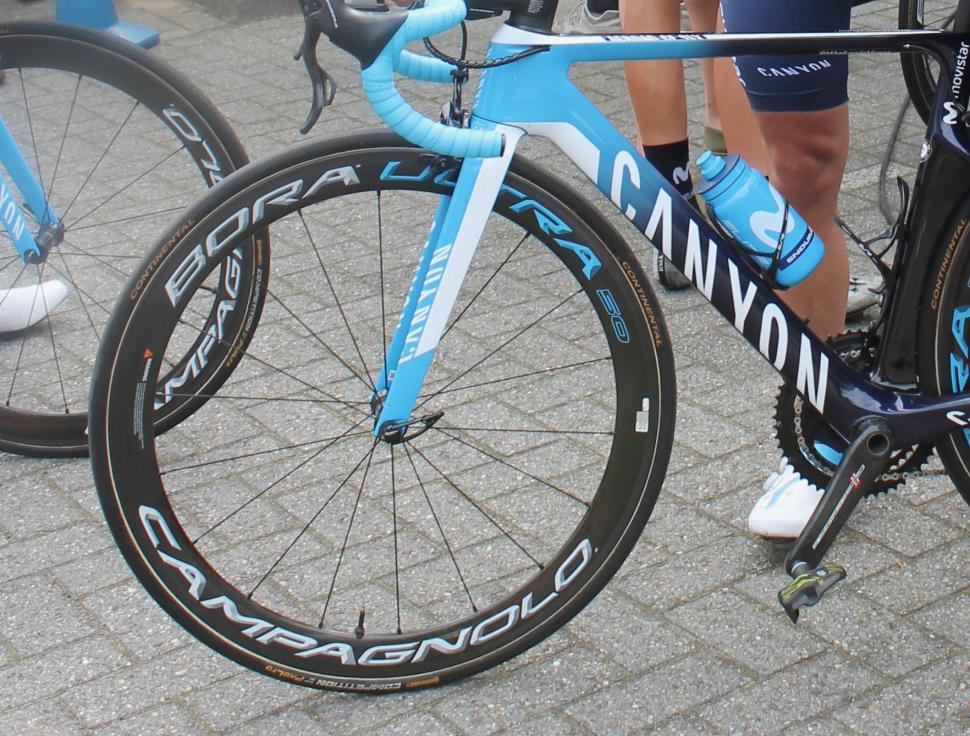 Campagnolo provides the groupsets and wheels for Movistar. The team uses only rim brakes. The Bora Ultra 50 on Mikel Landa's Canyon Ultimate CF SLX is made with full-carbon rims and carbon hubs fitted with CULT ceramic ball bearings. 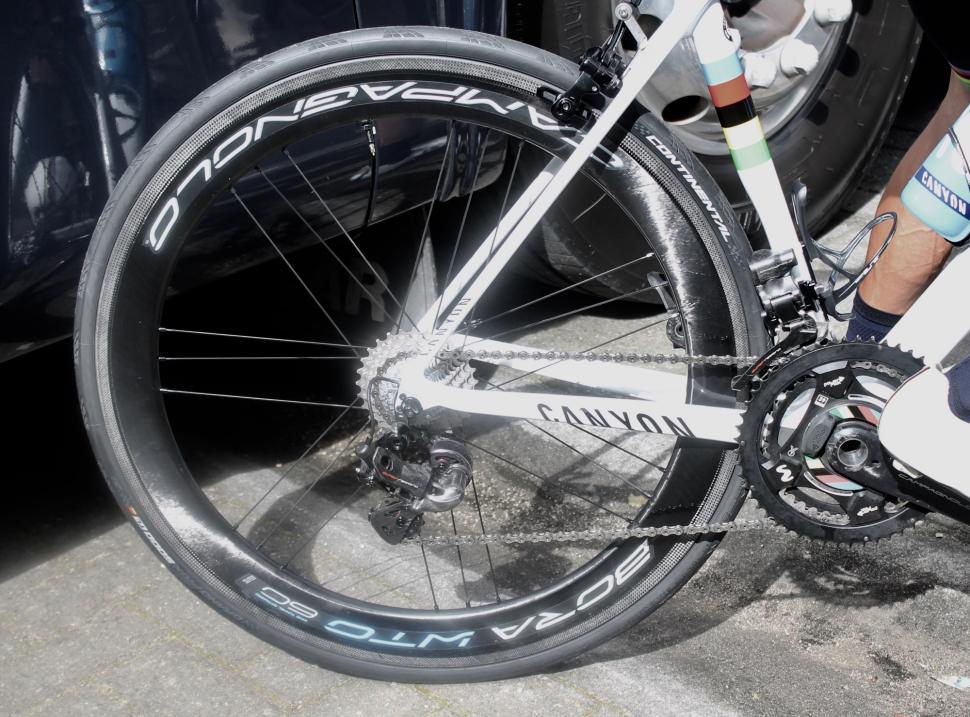 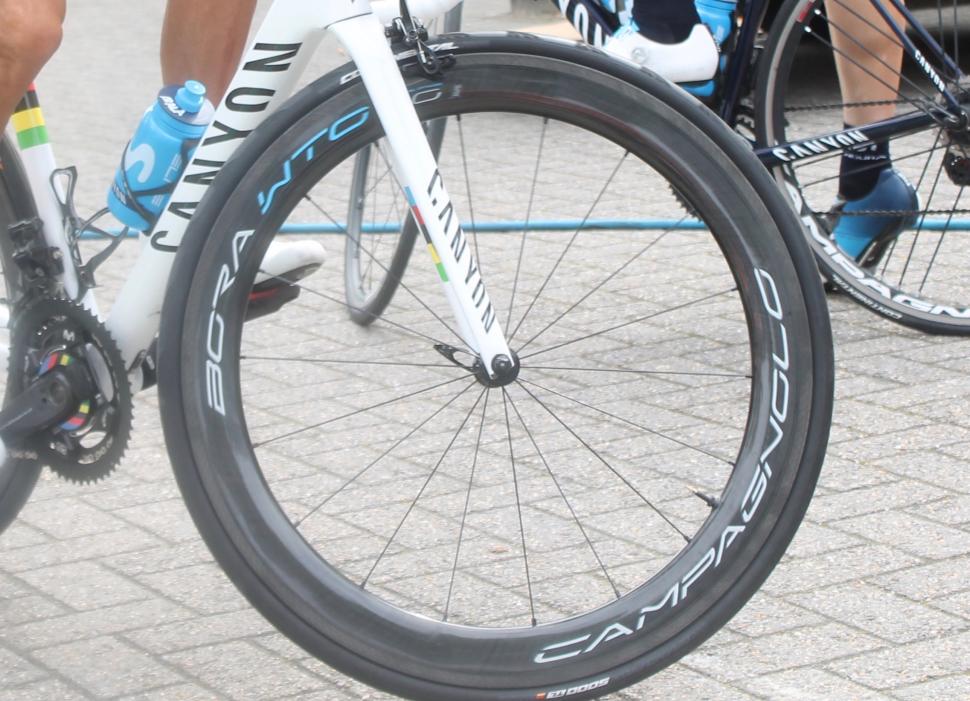 Rather than taking tubulars, these are run with tubeless tyres (Continental Grand Prix 5000 TLs in this case). Campagnolo insists that this is the fastest way to go.

Find out about 13 of the best tubeless wheelsets over £1,000 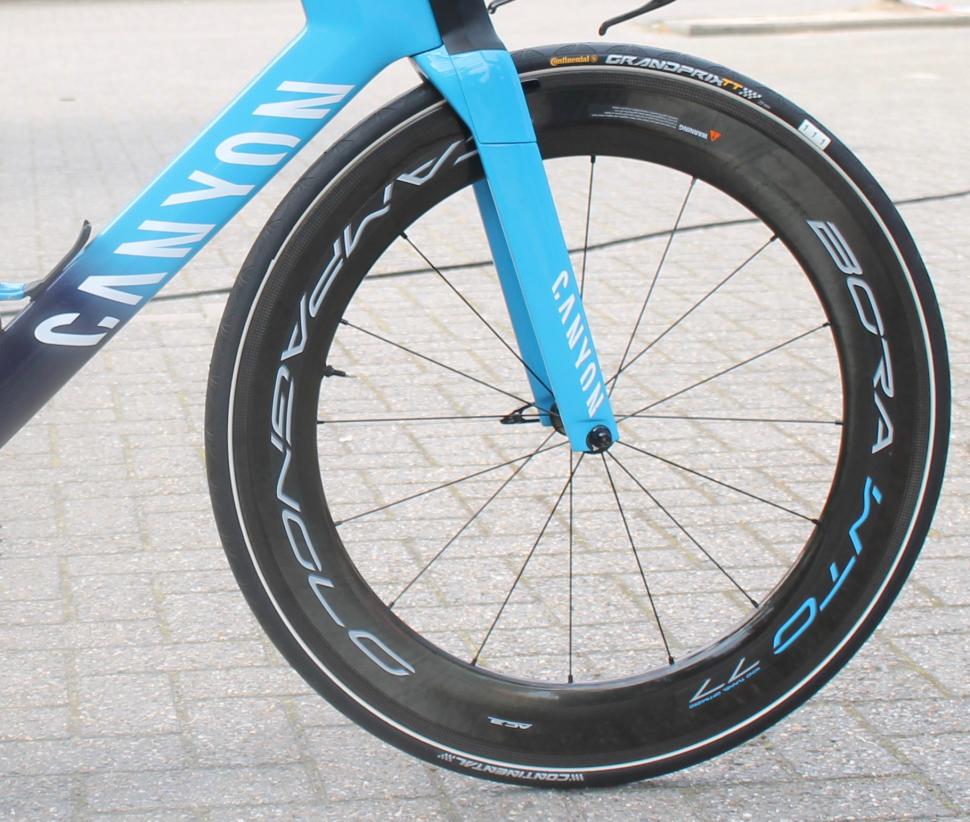 Imanol Erviti of Movistar has the 77mm-deep version of the Campag Bora WTO on his Canyon Speedmax CF SLX time trial bike, along with a Bora Ultra TT rear wheel. 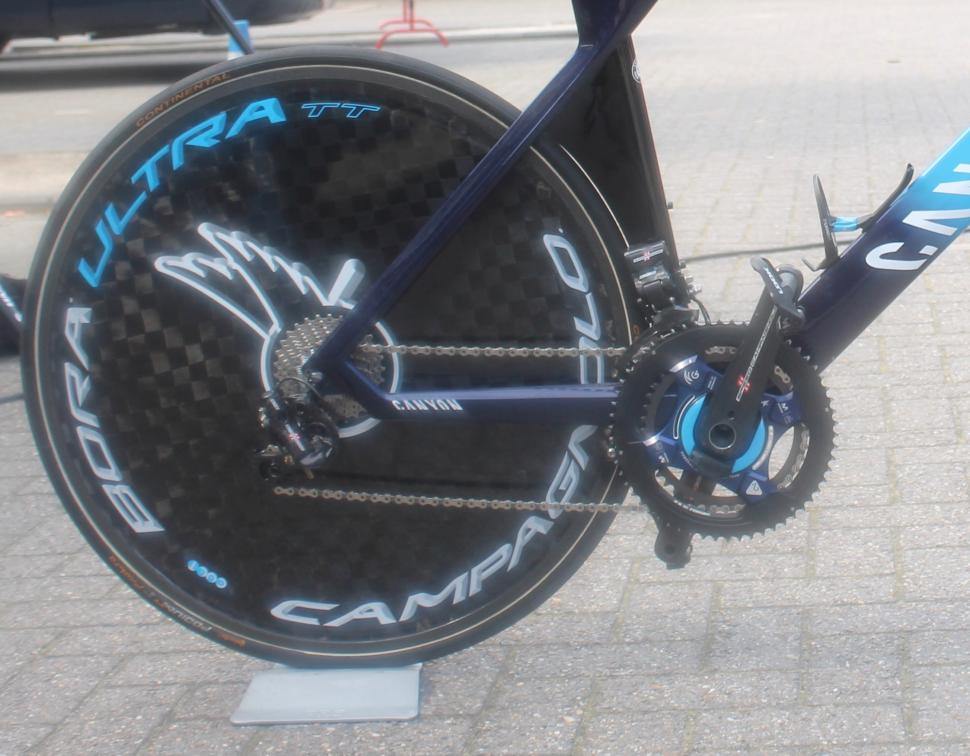 The tubular version is said to weigh just 864g. 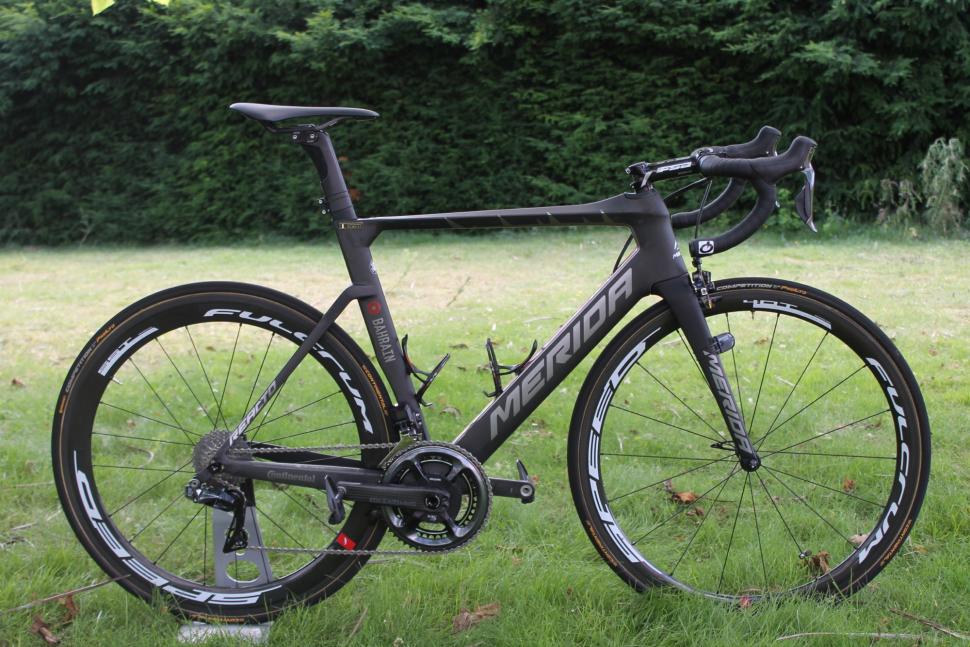 Campagnolo's sub-brand Fulcrum is the wheel supplier to Merida–Bahrain. Vincenzo Nibali opts for Fulcrum Speeds on his Merida Reacto KOM. Here he has a 55T on the rear for aerodynamics and a shallower 40T up front for better handling. Both rims are full carbon with a AC3 treatment on the braking surface. AC3 stands for All Conditions Carbon Control and the idea is that the textured design results in improved control whatever the weather. 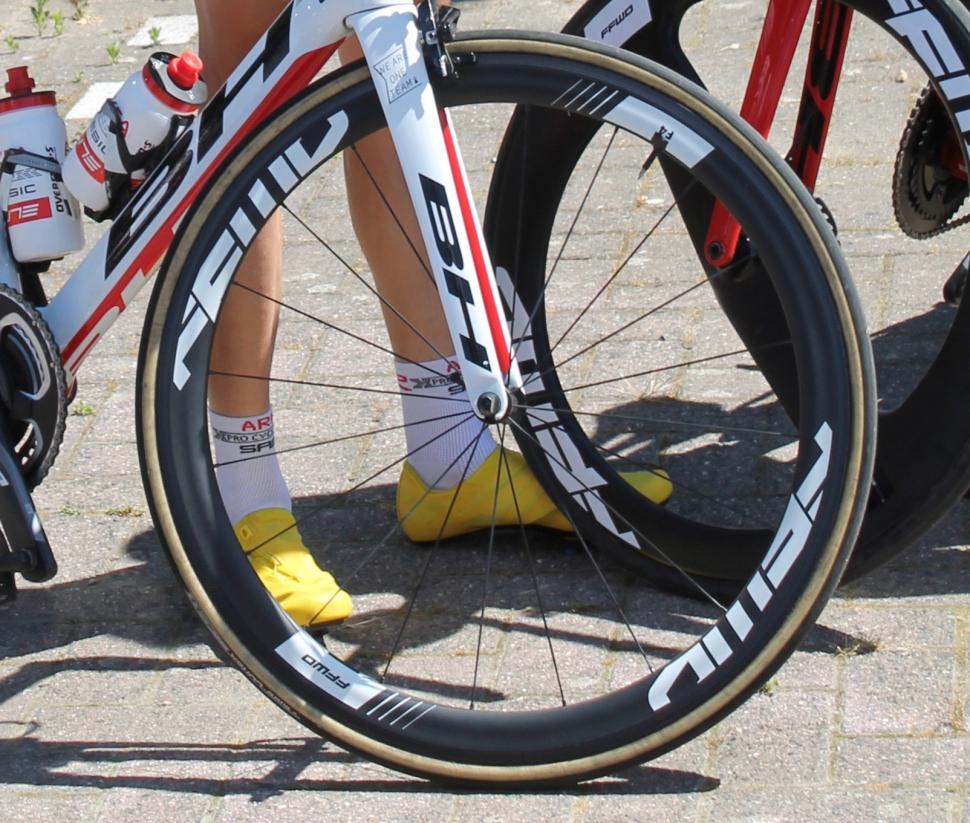 Arkea–Samsic's wheels are from Dutch brand FFWD. The F4's 45mm deep rims are made from unidirectional carbon. They're designed to give an aero performance while being easy to handle in blustery conditions. 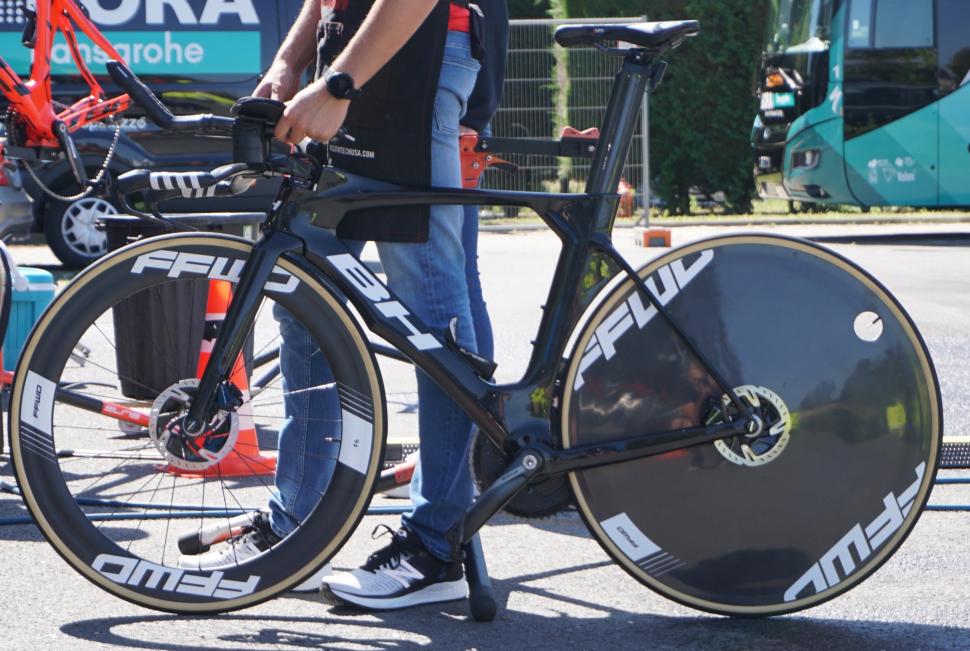 This time trial bike is set up with a 60mm-deep F6 at the front and a Tubular Disc at the rear. 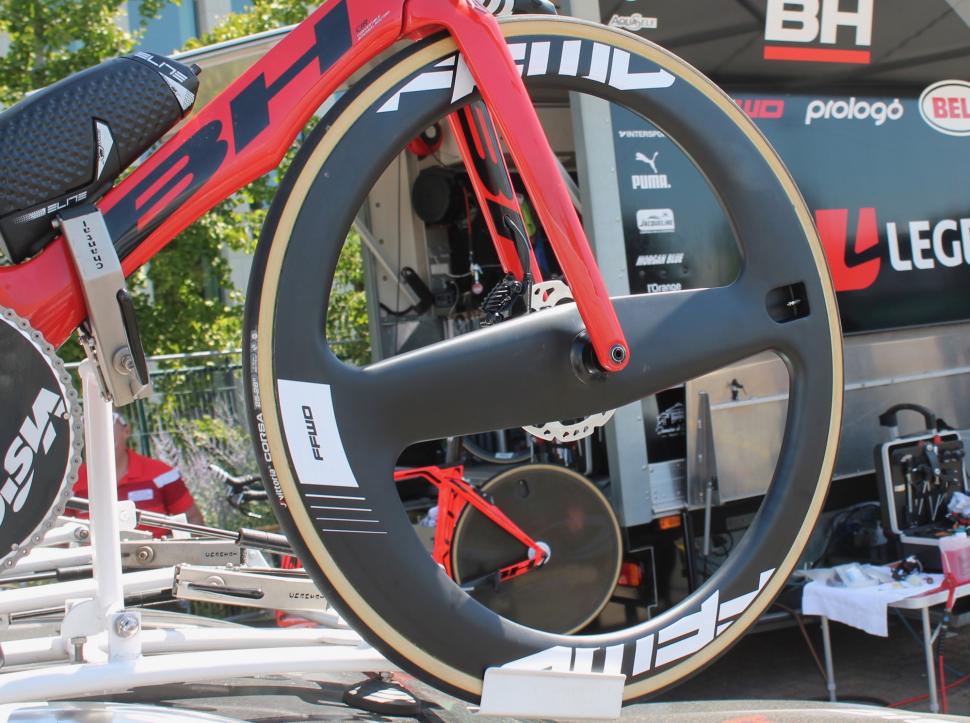 The new FFWD Falcon two-spoked wheel is being used in time trials by both Arkea–Samsic and Total Direct Energie. The rim varies in depth from 48mm at the shallowest point to 90mm at the deepest, and FFWD reckons that the wheel outperforms even trispokes in terms of aerodynamics.

Find out more about the FFWD Falcon wheel here. 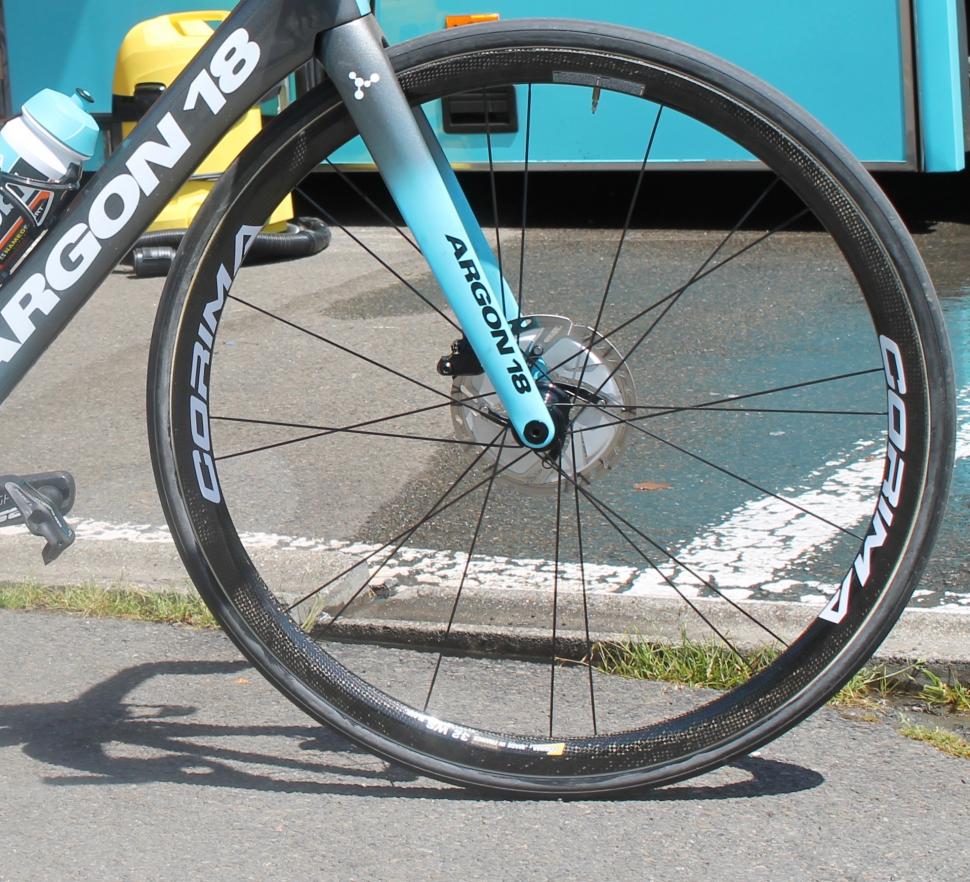 Team Astana uses wheels from French brand Corima. Jakob Fuglsang has the 32 WS Disc fitted to his Argon 18 Nitrogen Disc. At 32mm deep, it's shallower than most used in the pro peloton these days with a lightweight prioritised more highly than aerodynamics. The front one has a claimed weight of 645g while the rear is said to be 775g. 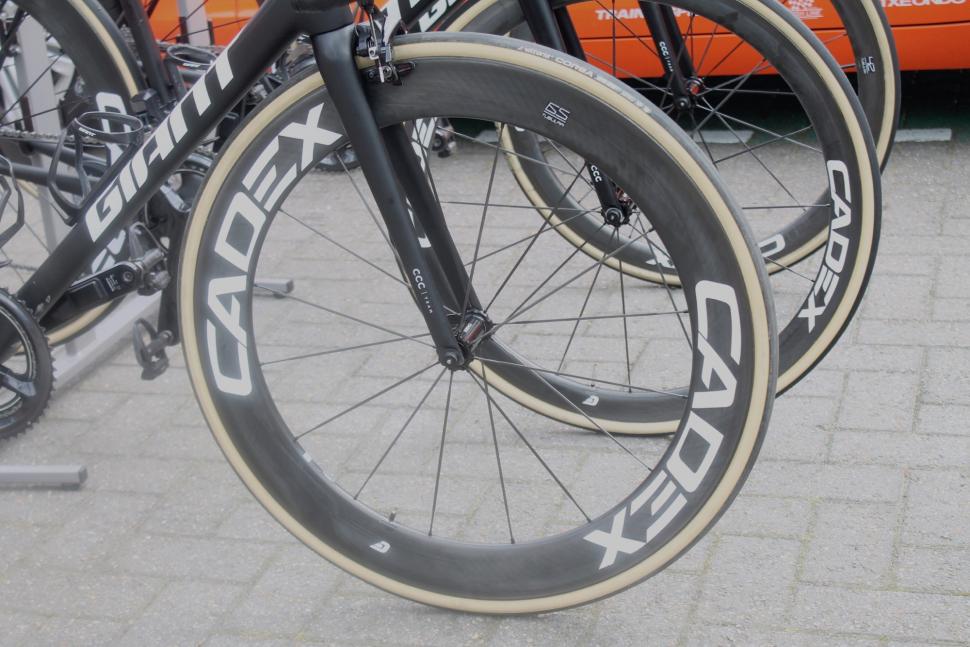 CCC uses Giant bikes while the components, including wheels, come from Giant's sub-brand Cadex. The 65 Tubular features a rim with a continuous carbon-fibre structure and aero carbon spokes. Although the rims are 65mm deep, the complete wheelset weight is a claimed 1,367g.

Find out more about Cadex here. 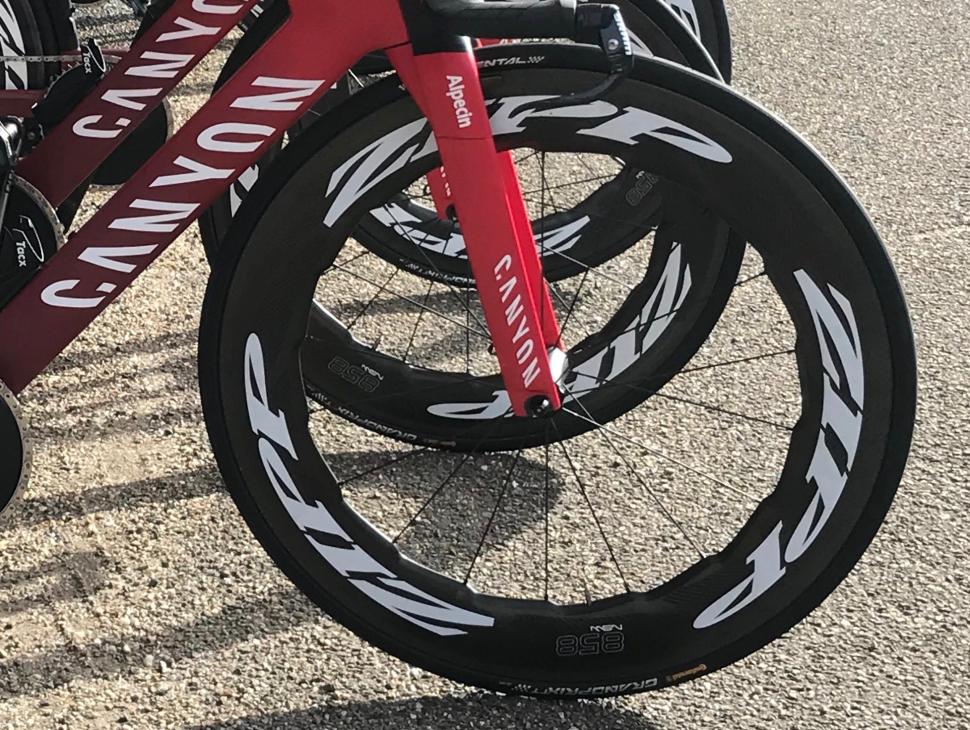 Katusha–Alpecin's Canyon Speedmax CF SLX time trial bikes were set up with Zipp 858 NSW front wheels. The rim design was inspired by the pectoral fins of humpback whales (honestly), undulating in depth from 77mm to 82mm, the idea being to reduce drag and side force. 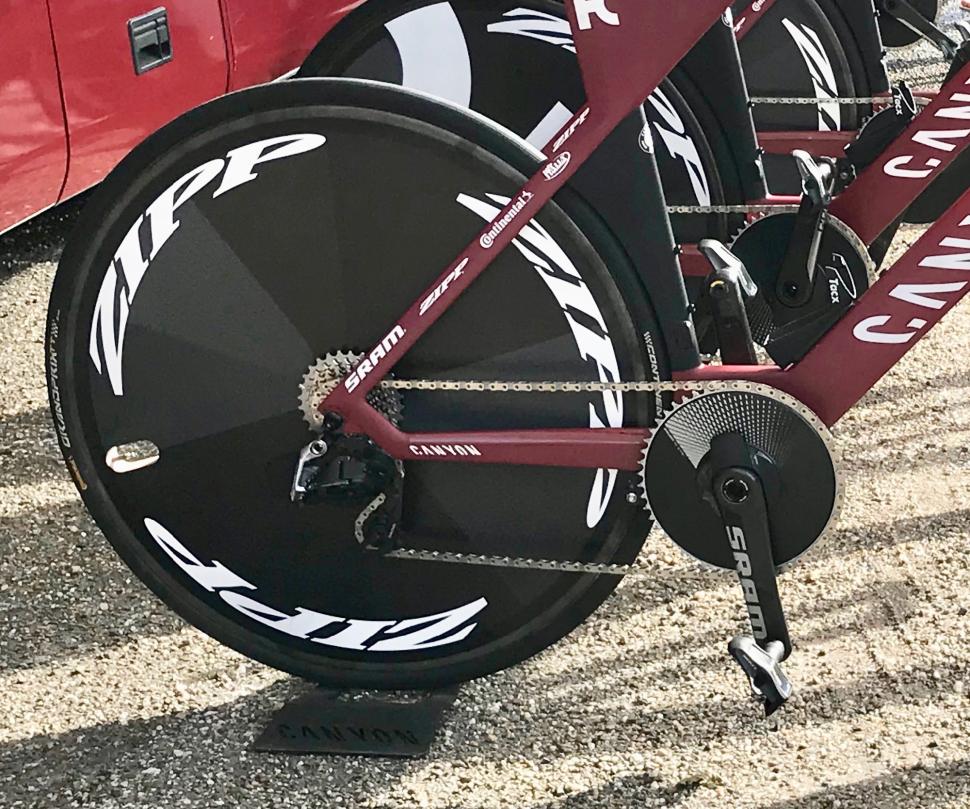 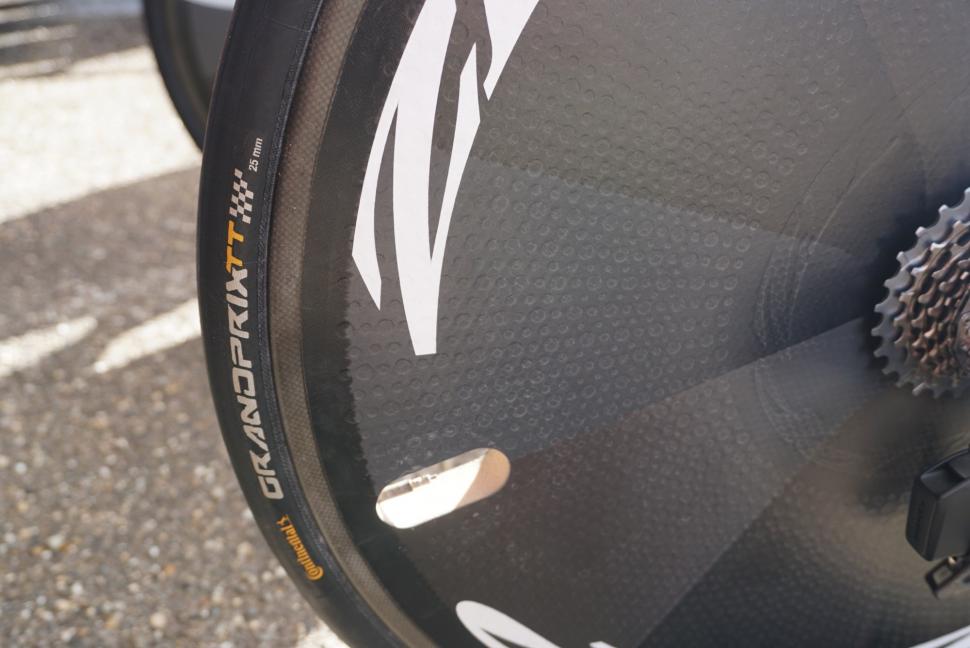 Naturally, Zipp claims that its Super-9 is "the fastest wheel ever". 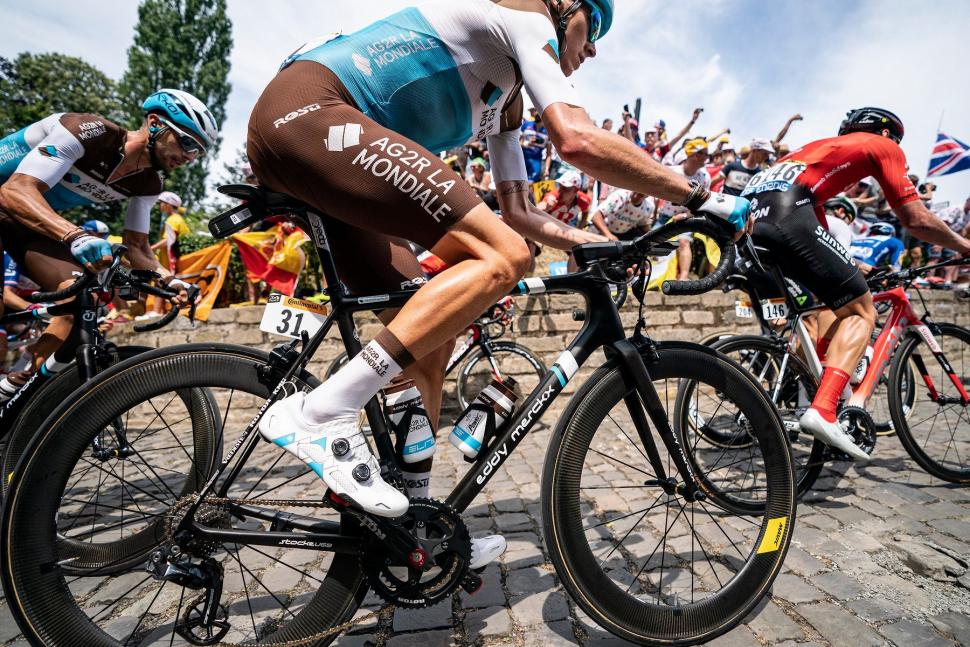 Romain Bardet's Eddy Merckx Stockeu69 bike is here fitted with Mavic's Comete Pro Carbon SL Tubular wheels. These have 64mm deep full-carbon rims, the profile of which is based on a NACA (National Advisory Committee for Aeronautics) airfoil. As well as minimising drag, the wide, rounded shape is designed to offer stability in crosswinds. 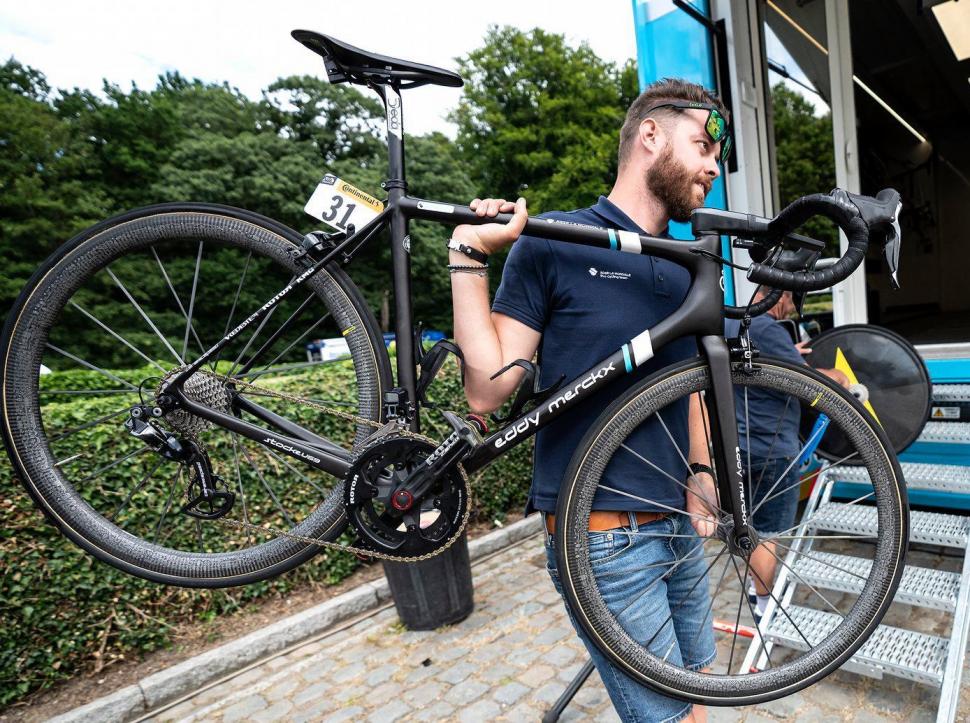 Mavic has given several of its wheels a special Tour de France finish (available to buy), the graphics referencing some of the places visited by this year's race.