Flandriens, fries and fighting for position: the beautiful brutality of the Tour of Flanders

With the Tour of Flanders on the horizon, we look ahead to the most exciting day on the pro cycling calendar, with Tom Pidcock offering his thoughts on this all-encompassing Belgian classic
by Ryan Mallon

The Tour of Flanders is cycling.

Now that may seem too grandiose a statement for a race that takes place in early April, often under grey Belgian skies, and which is almost entirely raced on narrow, poorly surfaced roads through pokey villages in a largely flat country, by big, burly square-jawed thugs wrestling with their bikes.

Visually anyway, Flanders is worlds away from the average cycling fan’s introduction to the sport – the sunshine and sunflowers of the French summer and the spectacular high mountains of the Alps, where taut, tanned, handsome climbers duke it out in flashes of vibrant colour.

The Tour de France is majestic, of course, but almost too perfectly constructed.

The allure of the Tour of Flanders, on the other hand, lies in its paradox. It represents both the past and present, the brutal and the beautiful, the romanticism and harsh reality of both cycling and the region to which it is intrinsically linked.

It represents everything our sport is about, both idealised and real.

The Ronde van Vlaanderen is tough, dramatic, gritty, tactical, constantly compelling racing, conducted between a cacophony of excitement and adrenaline generated by the most passionate beer-drinking, frite-munching fans in the world. If the grand tours are three-week long operas, as the cliché goes, Flanders is punk rock, played out in a sweaty pub. 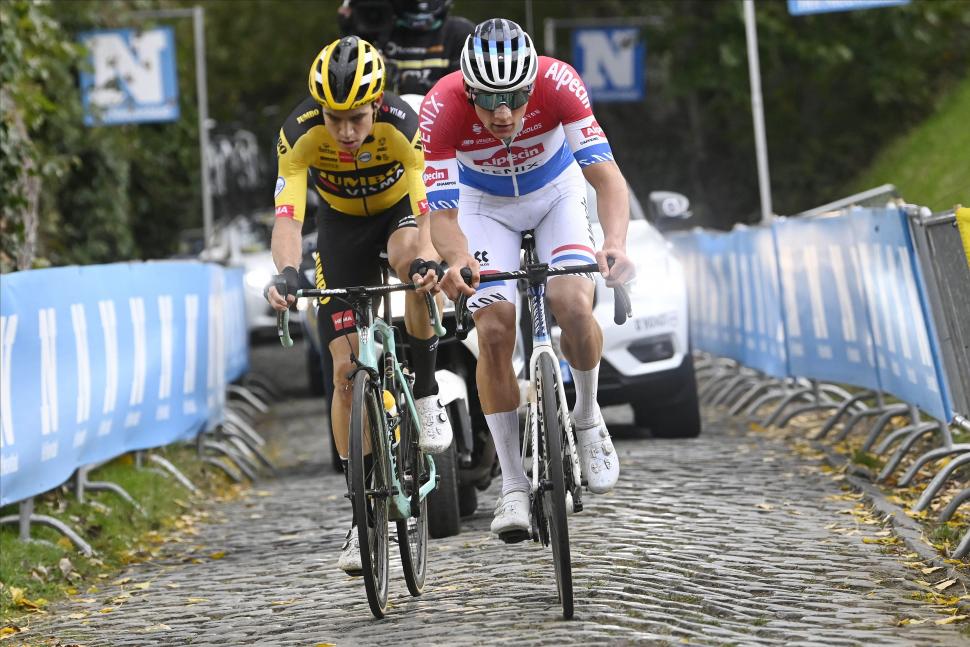 Flanders' finest: Van der Poel and Van Aert duke it out at the 2020 Ronde. Van Aert will miss this year's race after testing positive for Covid (image: CorVos/SWpix.com)

But in a sport so deeply embedded in its surroundings, it’s also cycling’s most potent expression of history, geography, culture, complicated politics, and most importantly local pride.

The Tour of Flanders, as Edward Pickering writes in his excellent book on the race The Ronde, is its region’s most important cultural event. Flanders Week, the ten or so days of races leading up to the main event, which mostly take place over the same roads, are a celebration of Flanders’ distinct culture, language and identity.

“The event projects values to the population,” former cycling journalist Rik Vanwalleghem told Pickering. “The myth of the Flandrien. You know, we Flandrians don’t complain; we go on, with the grey skies and the mud and the dreadful weather. We don’t speak that much but we go on. All of these things are then seen in the race, and that is our identity. That’s us.” As Vanwalleghem says, De Ronde’s race route – which, before the switch to a circuit-based finale in 2012, allowed intrepid fans to easily visit numerous spots along its zig-zagging course – is deeply embedded within Flanders’ landscape and culture, from the exposed plains of the opening kilometres to the pivotal Flemish Ardennes which separate the Dutch-speaking region of Belgium from French-speaking Wallonia.

The tough, unrelenting character of the route is essential to the iconography of both De Ronde and Flanders itself, rewarding the type of hardworking and stoic character – the Flandrien – central to Flemish cultural identity.

Those iconic cobbled bergs, the hellingen, are cycling’s real holy places – the Oude Kwaremont, the Paterberg, the Taaienberg, the narrow, killer Koppenberg (where Jesper Skibby famously came unstuck in in 1987 and which finally takes its place in the women’s race this year), and of course the iconic Muur van Geraardsbergen, or Kapelmuur, the focal point of the race before 2012.

Nasty, brutish and short, these hills are the antithesis of the long, well-surfaced, sun-kissed cols of the Tour de France. And they are all the better and richer for it. The Muur – and more specifically, the section leading to the chapel at the top – is the best place in cycling. Even on a drab February weekend at Omloop Het Nieuwsblad, it still possesses that magic. An empty Alpe d’Huez during the Dauphiné? Not quite the same.

“My first proper experience of the cobbled climbs in Flanders was after I won junior Roubaix,” says Tom Pidcock, one of the favourites for Sunday’s race.

“We did a recon the next day and I got dropped on every single climb and I was like ‘I hate these climbs’! But I guess they’re kind of growing on me a bit now.

“It’s harder for me because I’m light and don’t have the raw power of some guys, but then again after 280km that could play into my advantage. I think I have a different opinion of the hills now than I did then!” 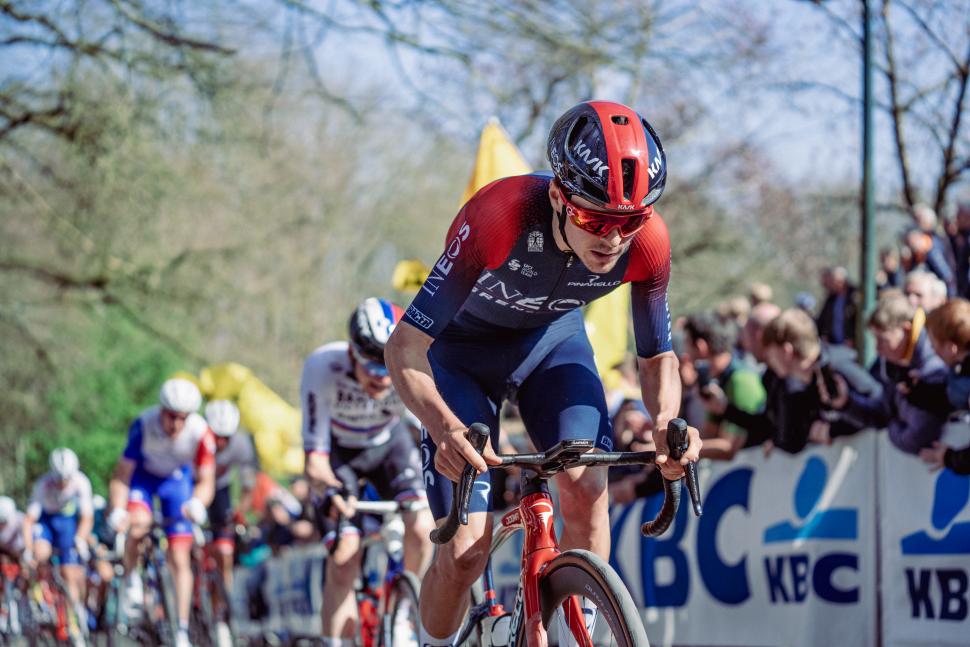 As a race De Ronde also acts as a symbol, not only for Flanders as a region, but for cycling as a sport. It plays to the idealistic tendencies of the cycling fan, willing and eager to mythologise the suffering, grit and heroism of bygone eras, and the hard men and women with muddied faces recreating those historic exploits on the same claustrophobic cobbled climbs and narrow, exposed lanes now: pushing, shoving, shouting, always fighting for position, diving into every corner.

But the race also encapsulates the other face of cycling, that of the modern pedalling billboard, as evidenced by the massive corporate hospitality tents which have lined the Oude Kwaremont and Paterberg since the organisers decided to reroute the race in 2012.

That decision was a controversial one – gone was the iconic Muur-Bosberg denouement and the undulating, deceptively complicated run-in to the finish in Meerbeke, to be replaced by laps of the Kwaremont and Paterberg and a rather straight-forward finale into Oudenaarde.

Fans were so outraged at the Muur’s omission that they staged a mock funeral for the climb when the route change was announced in 2011. There are also accusations that the race has become too big, too commercial, lacking the homespun, jump-in-your-car-and-head-to-the-next-spot feel of the smaller Flemish classics like E3 (dodgy posters aside) and Omloop.

Bradley Wiggins, a keen student of the sport, sides with the traditionalists. “I’m a nostalgic person,” says the 2012 Tour de France winner. “And for me, the finish in the ‘90s, going from the Mur de Grammont to the Bosberg – that is still my favourite kind of Tour of Flanders.

“And then they mauled it. In the last few years, going up the Kwaremont a few times and finishing it in Oudenaarde – I’m not the biggest fan of that parcours.” Wiggins climbs the Oude Kwaremont during the 2015 edition

Despite Wiggins’ nostalgic protestations, the Ronde has never been a static race. In fact, the “traditional” Muur-Bosberg combination had only been in place since 1975 and the race’s finish location has changed no less than ten times in its 109-year existence. Before the Second World War, only three hellingen were regularly used by the race, which then was known more for its rough, exposed roads than any of the now famous bergs.

It’s tempting to draw parallels between how Flanders – as a race and a region – is mythologised as a land of hardworking farmers and coalminers and tough, unshakable riders, and the present reality of a modern service economy and corporate VIP tents for paying punters on the Kwaremont.

The Tour of Flanders, then, is a race predicated on the idealised past, but also very much rooted in the realities of the present, much like its home region. 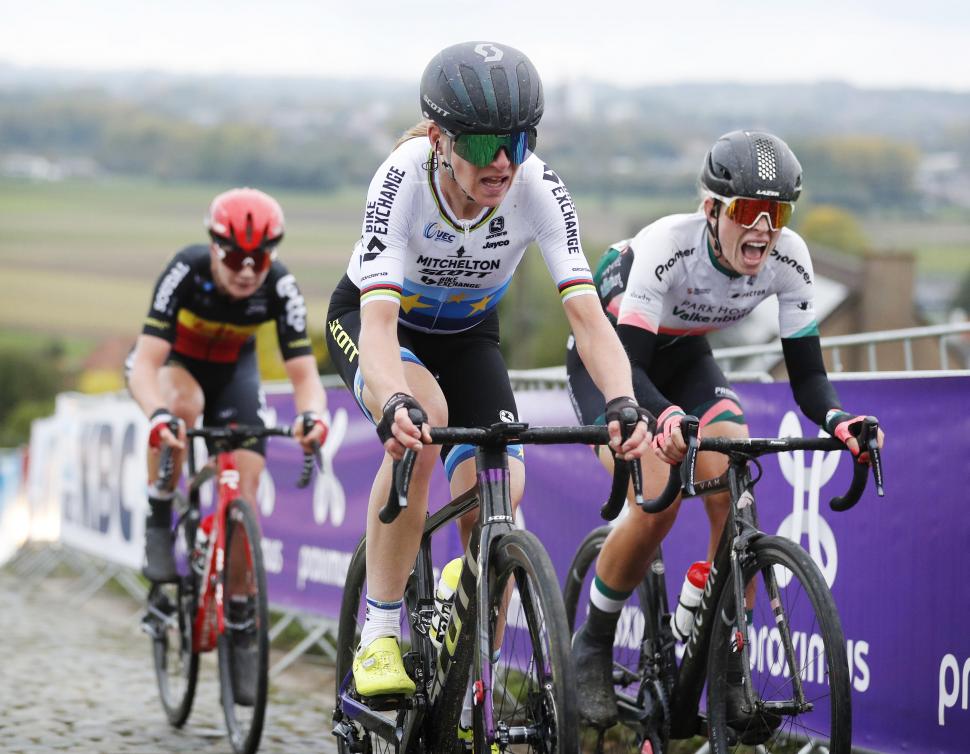 Beyond all the symbolism, the Ronde is simply home to the best racing all year. Milano-Sanremo may have the most exciting final half an hour, but the Tour of Flanders has the best 270 kilometres.

It almost never fails to deliver a killer narrative – in the last 15 years alone, we’ve witnessed Boonen’s epic duels with Cancellara, Devolder’s double heist in 2008 and 2009, Deignan versus Johansson, the tactically compelling and frenetic 2011 edition won by the crafty Nick Nuyens.

Those races – especially Nuyens’ victory – summed up what De Ronde is about. Yes, it’s about having strength, but it’s also about positioning, local knowledge, and tactical nuance and guile. As Tadej Pogačar demonstrated at Dwars door Vlaanderen this week, it’s all well and good being the best bike rider in the world – but if you’re not in the right place at the right time (and the true Flandriens always are), you will pay the price if you lose even a handful of places in the bunch. A cunning rider can always beat a more powerful one at Flanders, and after 270km all bets are off anyway – as we saw last year when Kasper Asgreen sensationally outsprinted Mathieu van der Poel. Some of the race’s nuance, as Wiggins says, was lost with the route change in 2012, which tipped the scales towards the strongmen and away from the master tacticians. However, the last few years – arguably starting with Philippe Gilbert’s 56km solo win in 2017 – have seen the event recapture its perfect balance between brain and brawn.

But what makes the Tour of Flanders really special? For Pidcock, the Ronde’s biggest appeal is its fans, who will be returning to the race in their thousands after the eery covid-induced silence of the last two editions.

“What makes Flanders so special is the crowd, which I’m yet to experience,” the cyclocross world champion tells road.cc. “On Sunday that’s going to be a nice experience for me.

“The chance to win Flanders – it’s a monument. It’s probably, in Belgium’s eyes, the biggest race of the year. I’ve spent a lot of time here so it’s rubbed off on me I guess. It’s a race I want to win in my career for sure.”

As Pidcock fights for position with Pogačar and van der Poel on Sunday, all of Flanders will come together to celebrate their sport and their identity, on April’s holiest day.