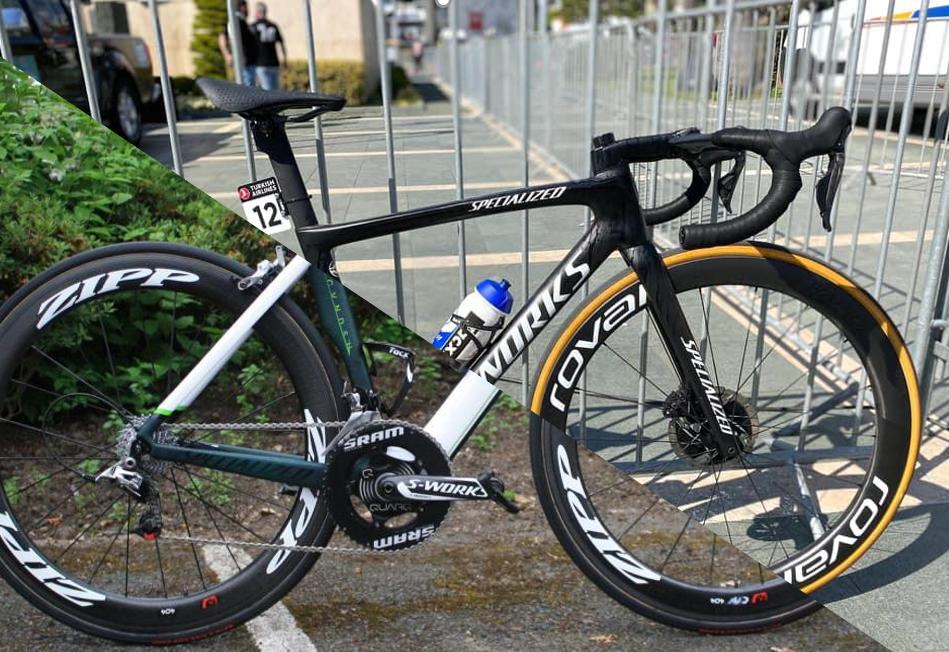 Cav is back at the Tour de France after a remarkable comeback season so far... so let's compare his 2014 bike with his current race machine
by Liam Cahill

Many in cycling thought Mark Cavendish’s incredible career was going to fizzle out, with some winless years before he eventually wasn’t able to secure a contract. That scenario nearly came true, but thanks to a one-year deal with Deceuninck Quick-Step and an incredible victory on stage four of the 2021 Tour de France to mark his 31st TDF stage win, Cav has made it very clear that he’s far from done yet.

The move back to Deceuninck Quick-Step was one that Cavendish has described as like coming home, and he’s also back with the bike brand which he found so much Tour de France sprint success with. Specialized has been a Quick-Step sponsor for a number of years now, and Cavendish made no secret of the fact that he was happy to be back aboard a Specialized; but he's been gone a while and in that time, quite a few changes have taken place. Here’s everything that's different between his 2014 race bike and the current 2021 offering... 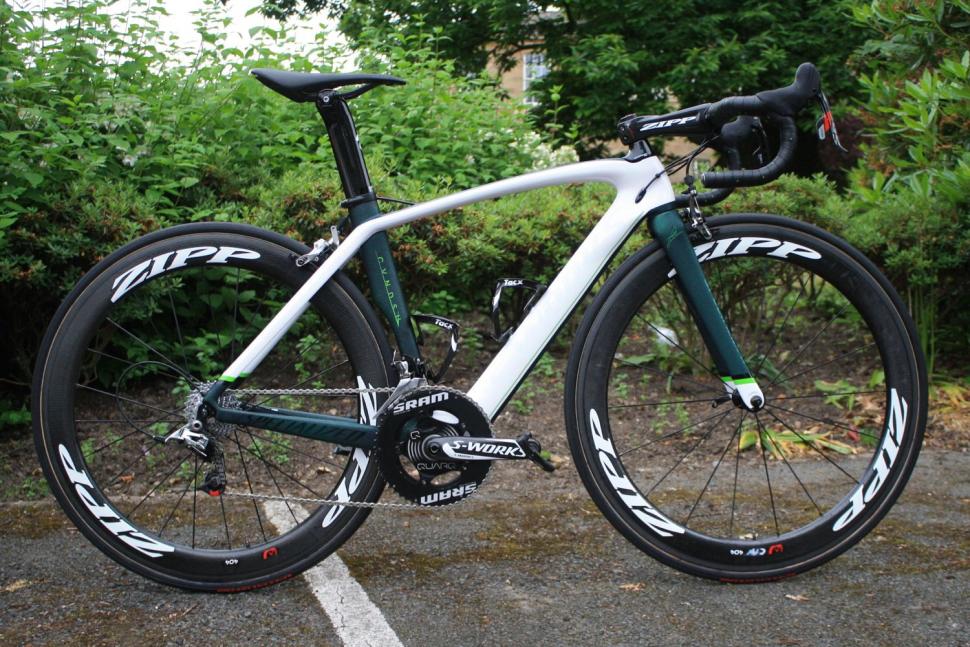 Before we get into the detail of the Venge vs Tarmac debate, Cav’s final bike from Specialized was actually the 2015 S-Works Venge Vias. Rumour has it that he wasn’t much of a fan of the Vias, and we’d also much rather take a look at his custom 2014 Venge. In our eyes, it’s a nicer-looking bike.

On with the bikes, and the biggest change for Cav is the absence of the Venge as a race bike option. Specialized-sponsored teams are only being given the S-Works Tarmac SL7 for 2021, with the American brand saying that the SL7 is pretty much on a par with the Venge in terms of speed while also being lighter. The public can still buy the Venge as a frameset, but you won’t find the pros racing it. 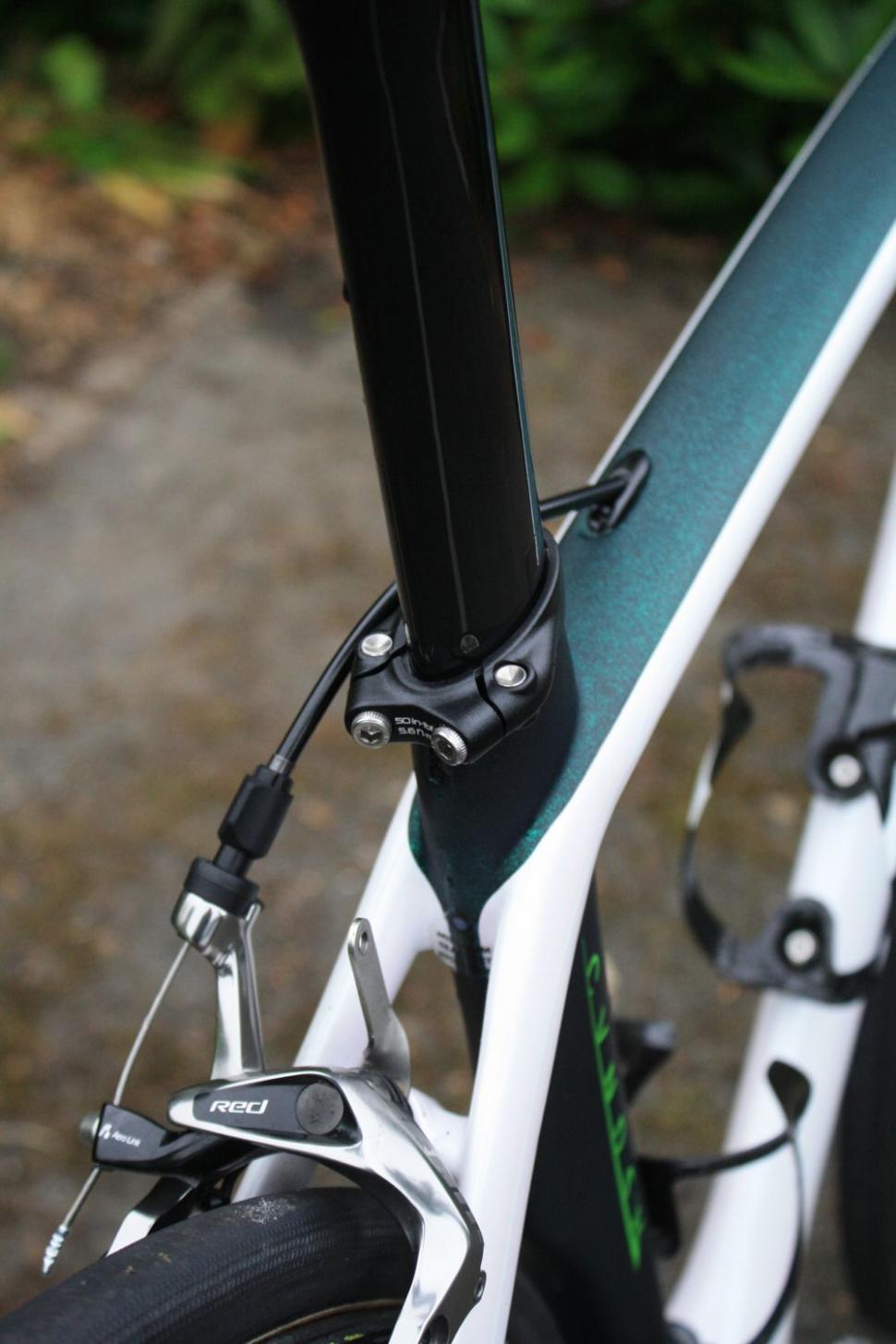 While the S-Works Venge that Cav was riding in 2014 was a rim brake bike, Specialized has made subsequent versions of the Venge and the current version of the Tarmac disc brake-only platforms.

What does that mean for a pro racer like Cavendish? Probably not a huge amount in reality, as race bikes are so well looked after by team mechanics and should your brakes be rubbing a little, you can always pull a spare bike from the roof of the team car if you have a problem. 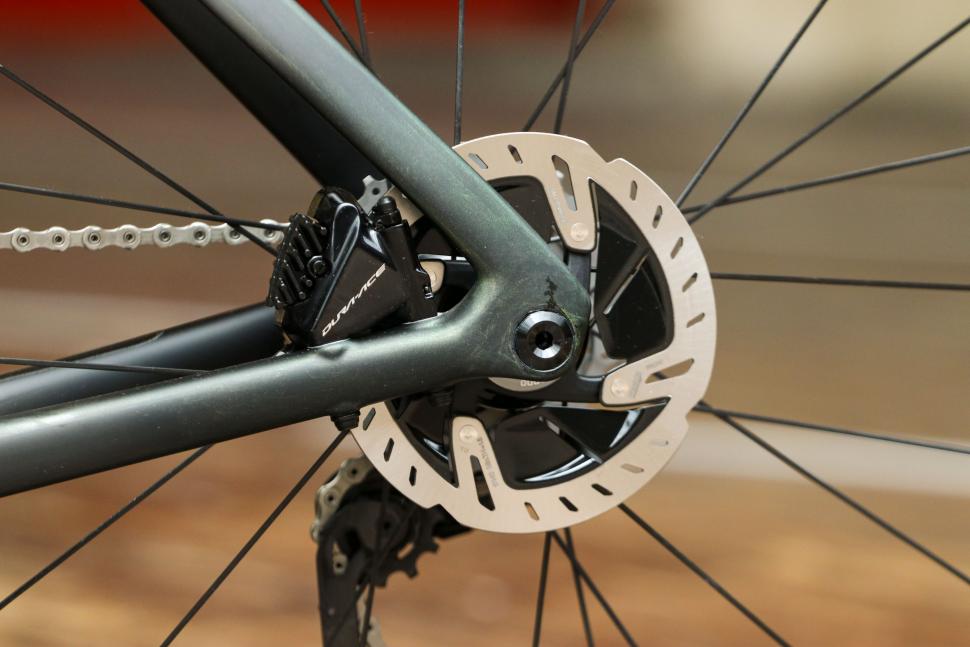 Better braking will be an asset in the peloton, as the rider will be better able to stop when there is a slam-on of the brakes further up the bunch. Adverse weather is also made a bit easier, as hydraulic disc brakes maintain their power with more easily controlled modulation when the weather is cold and wet.

Thankfully for Cavendish, he’ll be well used to disc brakes by now as the Merida Reacto of his former team, Bahrain McLaren, was also disc brake.

You can’t have tubulars either

Specialized-sponsored teams have only got one bike to pick from, and now they’re being forced to race on… clinchers!

> Did the 2020 Tour de France spell the end of the tubular tyre?

The lack of tubular tyres doesn't seem to be slowing the riders down though. Cavendish has won plenty of races this year, and Kasper Asgreen made Deceuninck Quick-Step’s whole season by winning the Tour of Flanders before Cav entered the arena at Le Tour.

SRAM Red is out, Shimano Dura-Ace is in > Could this be the new Shimano Dura-Ace 9200 dual control lever? 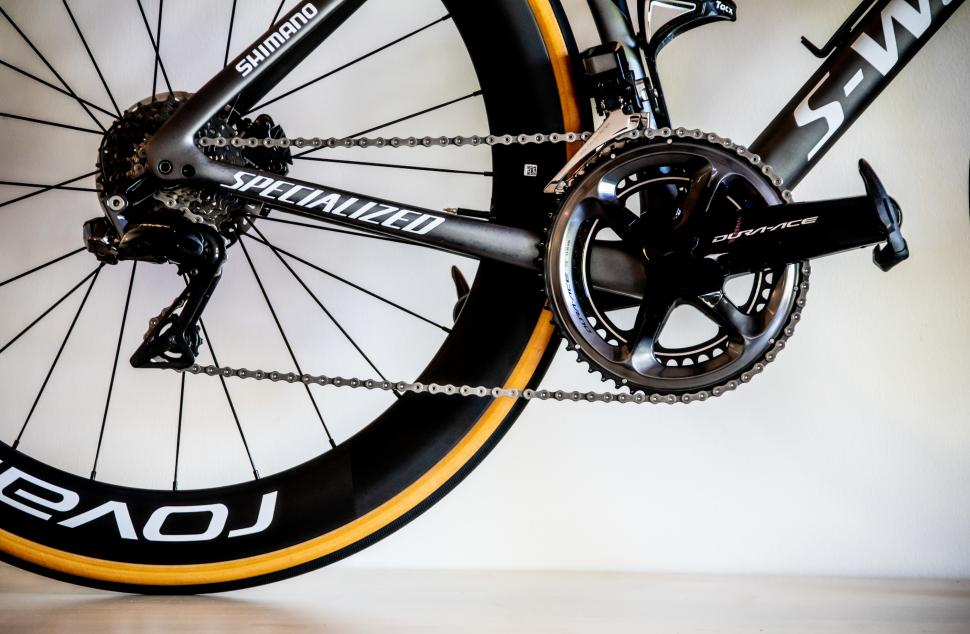 Being on a Shimano-sponsored team, Cavendish takes his power data from the Shimano power meter crankset, whereas he was using a power meter from the SRAM sub-brand Quarq on his 2014 bike. Both are dual-sided designs, so there isn’t a huge amount of difference. 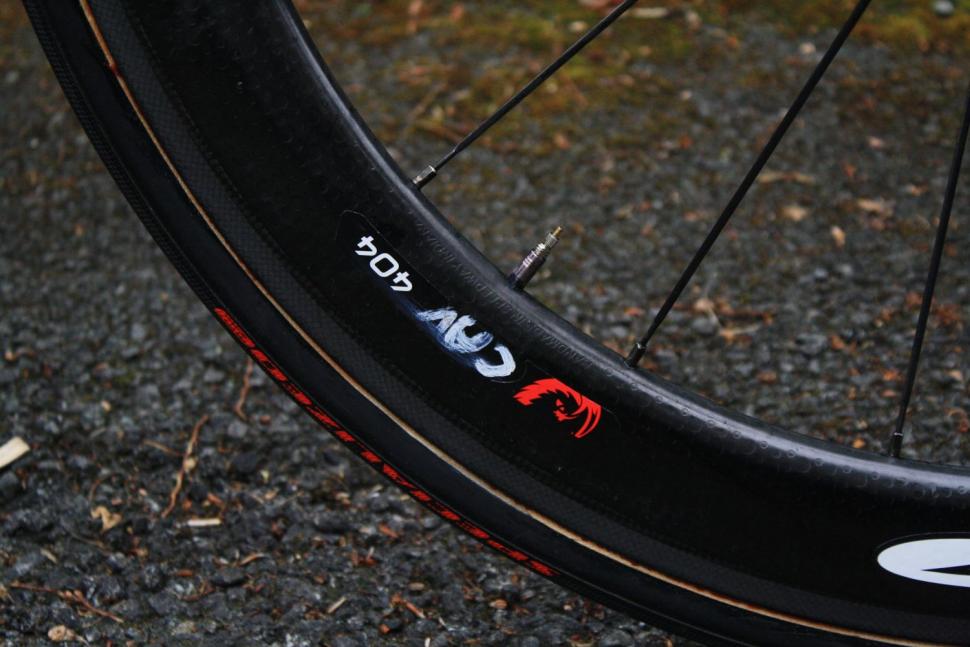 Back in 2014, Cavendish had the Zipp 404 tubular wheels; and while they didn’t use a narrow rim by any means, the Roval Rapide CLX front wheel is, at 35mm, a properly wide rim by road bike standards. 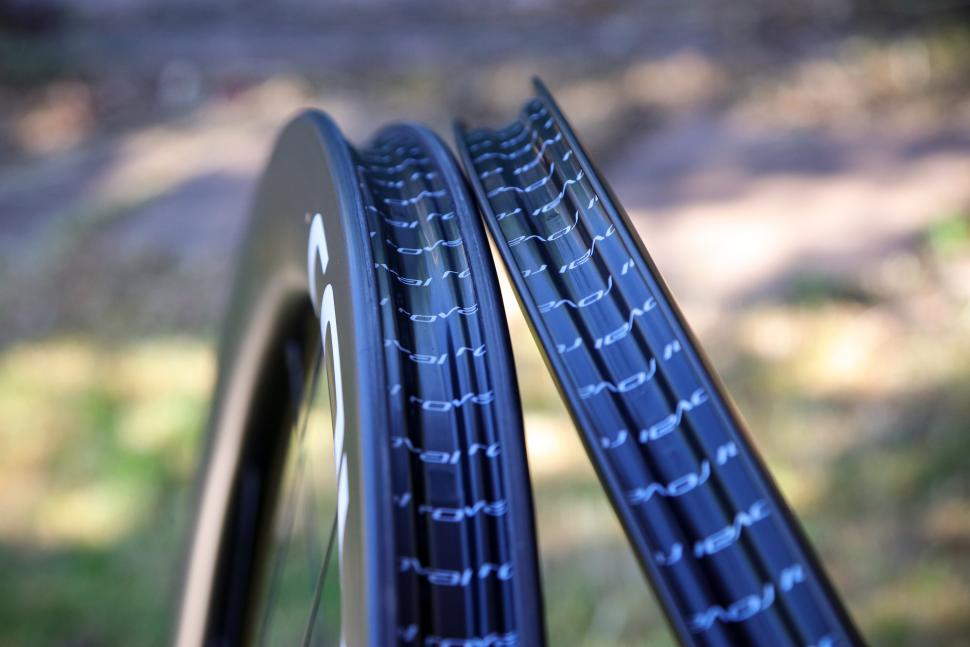 The theory here is that the wider rim helps you to cut through the air more efficiently, while also decreasing the twitchiness of the front wheel in crosswinds. The Deceuninck Quick-Step team runs latex tubes inside the S-Works Turbo Cotton tyres for the lowest rolling resistance possible.

Shimano’s sponsorship of the team also means that Cavendish can keep the Dura-Ace pedals that he used at Bahrain McLaren. In 2014 he was using the Look Keo Blade pedals. We’d theorise that, as a sprinter with plenty of power, Cavendish would probably have been using the 20Nm carbon release plate.

Where have the cables gone?

Along with the move to disc brakes, Specialized has been busy hiding away the cables from the front end of its road bikes while Cav has been away. 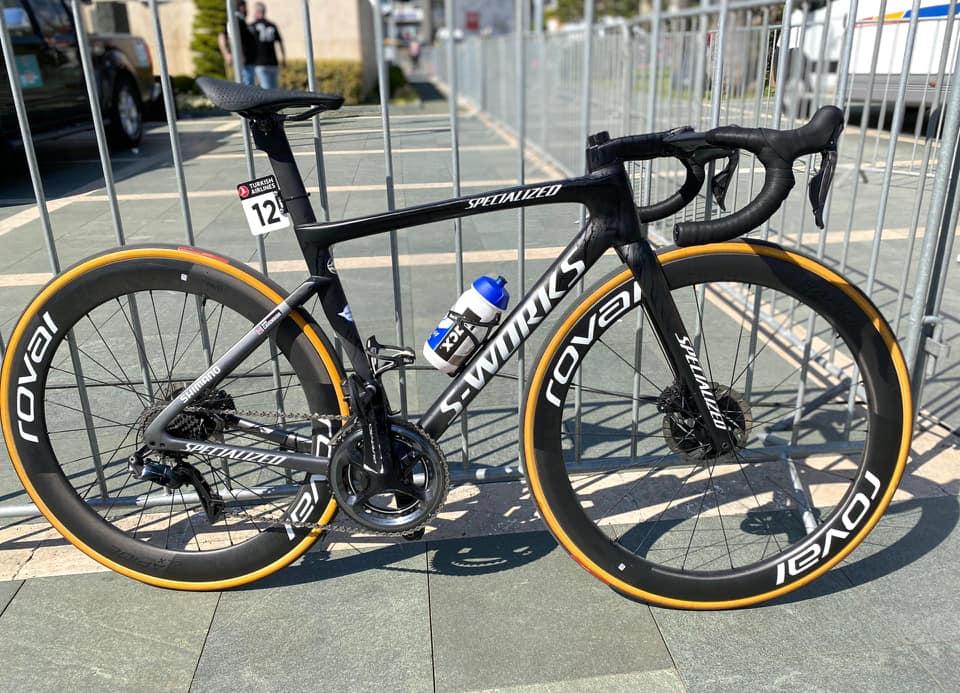 The S-Works Tarmac SL7 features a special headset design that allows the brake hoses and any shift wires to be routed up through the headtube, before they emerge to follow the underside of the stem. 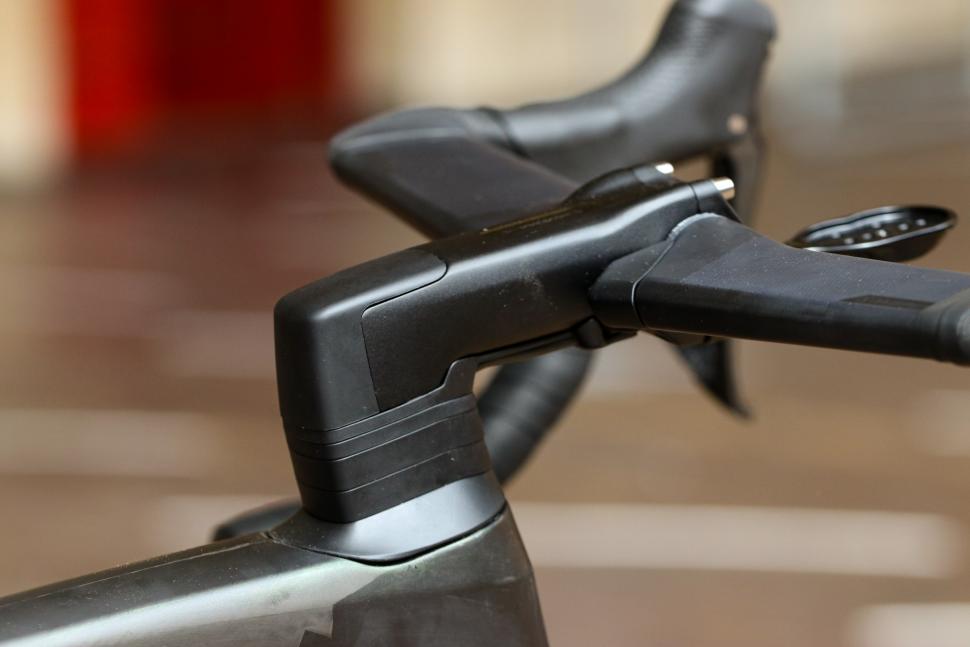 Hiding the cables helps with aero according to Specialized, and pretty much every other road bike manufacturer; although the jury is out as to how many watts this saves. It certainly looks cleaner, but working on the headset bearings does become a right pain.

So, those are the changes that have been made since 2014. Which one do you prefer, and do you reckon Cav will surpass Eddy Merckx' record at this year's Tour de France? Answers in the comments please!