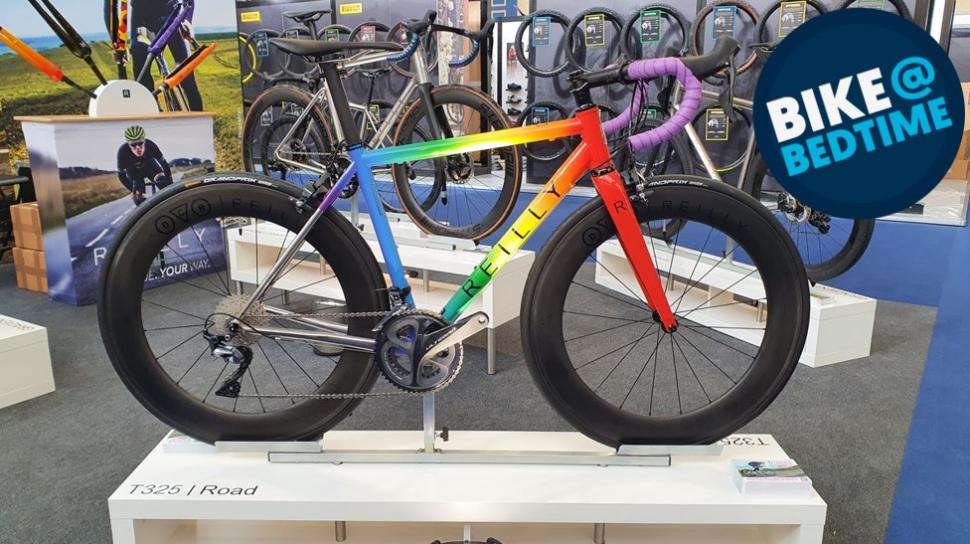 As a tribute to founder Mark Reilly who died last year, the bespoke bike brand is organising a ride on 7th August and taking part in Pride Month
by Jack Sexty

While tonight's Bike At Bedtime is about a very nice bike as per usual, it's also about celebrating the legacy of Reilly Cycleworks' founder Mark Reilly, who sadly died last year at the age of 53. The Reilly Rainbow Road Warrior titanium bike has already been featured in the new Bike Is Best campaign in support of Pride Month, and will also be "front-and-centre" at the Reilly Rides Out bike ride, taking place in memory of Mark Reilly in August.

Reilly was one of the UK's most respected framebuilders, gracing the workshops of Omega and Enigma before founding Reilly CycleWorks with Neil Fitzgerald in 2014. He was also one of the few openly gay men in the bike industry, and according to the brand's new co-owner Chris Ratcliff, Reilly's decision to move his business to Brighton in the early 2000s was to "embrace an LGBTQ+ lifestyle":

"Openness is central to how we operate as a business and we will continue to proudly bang the drum for greater diversity in the cycling industry," adds Ratcliff.

Back to the bike... it's essentially a custom-painted version of Reilly's T325, with the titanium frameset providing "an exceptionally direct but velvety smooth road experience today, tomorrow and for many years to come" according to Reilly. It certainly impressed David Arthur back in 2015, who said the bike was surprisingly stiff and direct compared to other springy titanium offerings at the time.

This Rainbow Road Warrior version was custom-painted by Faye Bishop, whose day job is painting for the Mercedes AMG F1 team. It took her over a week to create the colours for this bike, which covers the whole frame and fork apart from the majority of the seat stays, which remain polished titanium.

The increasingly endangered rim brake makes an appearance here, with a mechanical groupset and English threaded bottom bracket that will please traditionalists. Here's the full spec:

If you're really sold then you're in luck... because you can actually buy this exact bike! It's a size small and priced at £5,499, the link is here if you're interested.

Reilly's commitment to championing diversity and inclusion in cycling is spearheaded by Elaine Burroughs, an LGBTQ+ adventure cyclist who was approached by Mark Reilly to be a brand ambassador the year before he died:

“There is a perception around cycling that you have to be an elite athlete, which I’m not, and I’m passionate about raising awareness of just how accessible cycling can be, after all, it was a skill most of us learnt as children", says Burroughs.

"I’ve managed to convince women to switch from tarmac to off-road and they’re now happily reliving their youth by adventure biking.”

Reilly Rides Out will take place on Sunday 7th August departing 9am from TrainSharp Cycling in Lewes, with a choice of 30 mile gravel or 50 mile road rides. You can book your place here.