Jumbo-Visma’s Tobias Foss caused a huge upset by taking gold in the World Time Trial Championship at the weekend, and this is the Cervelo P5 that he rode to victory.

Foss’s win in Wollongong, Australia, was the first individual time trial world championship win for a Norwegian rider but it’s just the latest success for Jumbo-Visma which has had an incredible year with wins in Paris-Nice, Critérium du Dauphiné (both Primoz Roglic) and E3 Saxo Bank Classic (Wout van Aert). The Dutch outfit also won six stages of the Tour de France and took the overall victory courtesy of Jonas Vingegaard. 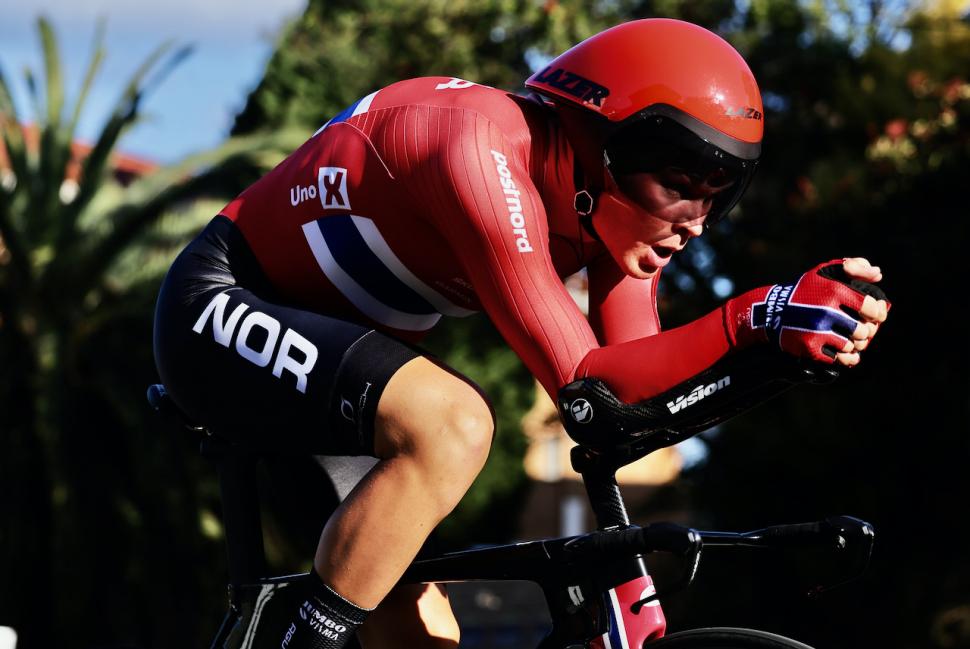 Tobias Foss won the time trial at the Norwegian Road Championships earlier in the season but no one expected him to take the world title, not even Foss himself. He said he was hoping for the top five at best and would have been satisfied with a top 10 finish.

Jumbo-Visma use the Cervelo P5 for time trials. This is a long-standing model, the latest version introduced for model year 2019. At the time of launch, Cervelo claimed that the disc brake-equipped P5 was the fastest bike they’d ever tested, 17% faster than its rim braked predecessor.

On top of that, Cervelo said the P5 was much stiffer than previously – 22% stiffer at the head tube and 26% at the bottom bracket – and 18% lighter, a medium sized frame and fork dropping 350g. 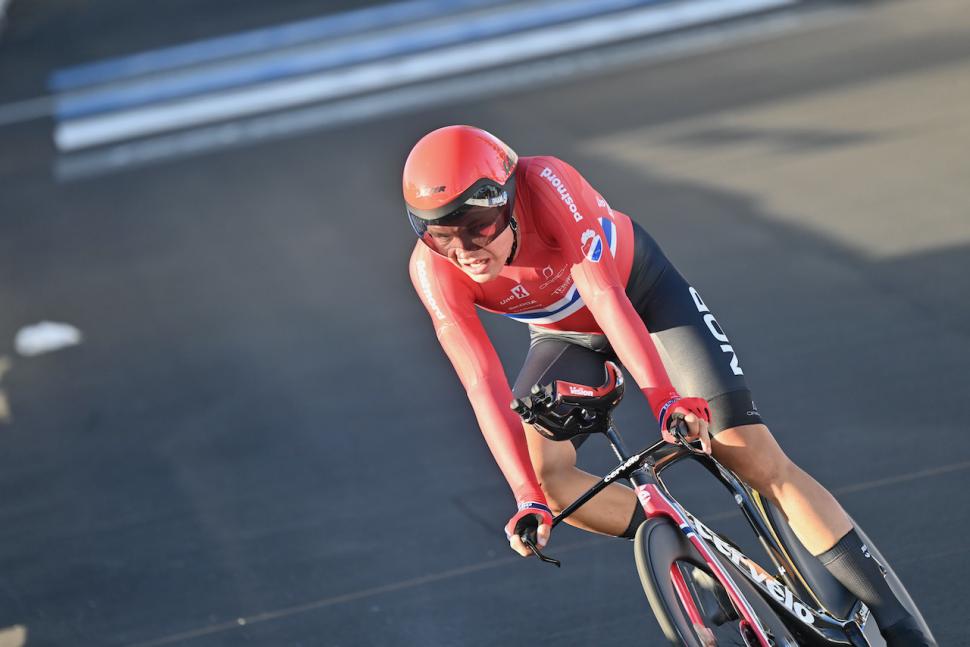 Cervelo says that it has pushed things as far as UCI regulations allow with the latest version of the P5. The UCI dictates that all elements of the frame and fork have to fit within ‘boxes’ of particular sizes. Cervelo took these boxes and worked on designing a bike that stuck to the rules… but only just.

The Cervelo P5 exhibits many of the features that we’ve come to associate with time trial bikes and aero road bikes, over the years, such as a seat tube that extends backwards around the leading edge of the rear wheel and a dropped down tube that curves closely behind the front wheel to manage airflow in that area.

The fork legs, in a Norwegian flag finish, are deep, the steerer is external, and both the crown and the stem are integrated. In other words, the head tube is shortened so that these features sit within the existing silhouette of the frame rather than increasing the size of the frontal area and adding drag.

Tobias Foss uses Vision TT extensions on top of Cervelo’s base bar. These look like the Metron TFE Pro P5 extensions that are designed specifically for the Cervelo P5. They’re full-carbon and are said to offer a high strength for their weight. 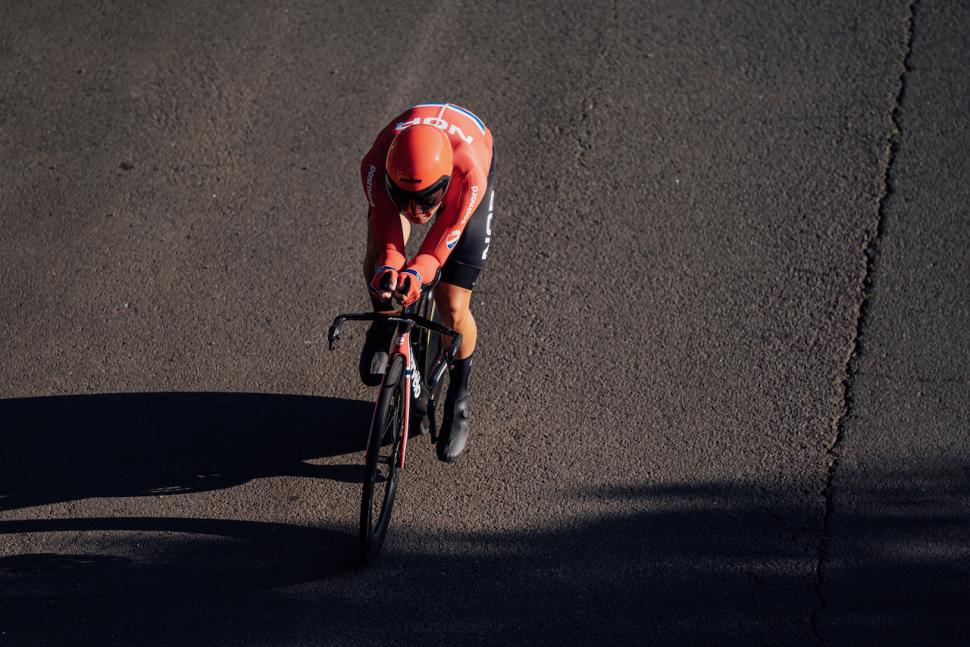 As you can see from this picture, the extensions run very close to one another, meaning that Foss’s forearms almost touch one another when he’s in his racing position. We’re not sure what size he uses but Vision says the small version is just 380g. If you’d like a pair, you’re looking at £3,439.95. Ouch!

Like most of the other WorldTeams, Jumbo-Visma uses Shimano Dura-Ace Di2 groupsets. The wheels are less frequently seen, though. They’re from Reserve, a brand founded by engineers from Santa Cruz (the company, not the city) back in 2014. Five years later, Cervélo approached Reserve to discuss manufacturing wheels and they’ve had a focus on aerodynamics ever since. 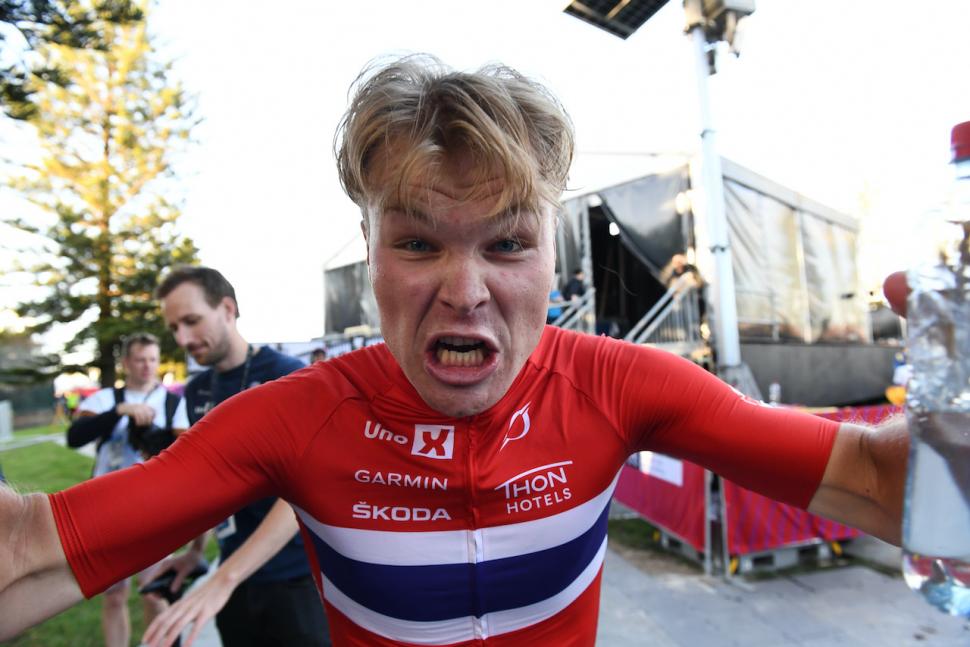 That’s the Reserve 77 up front with the Infinity Disc at the rear. Green Jersey wearer Wout Van Aert and race leader Jonas Vingegaard got first and second in the Stage 20 individual time trial at this year’s Tour de France using the same setup, so they’re building up an impressive palmarès. Of course, it does help if you have some of the most talented riders in the world on board.