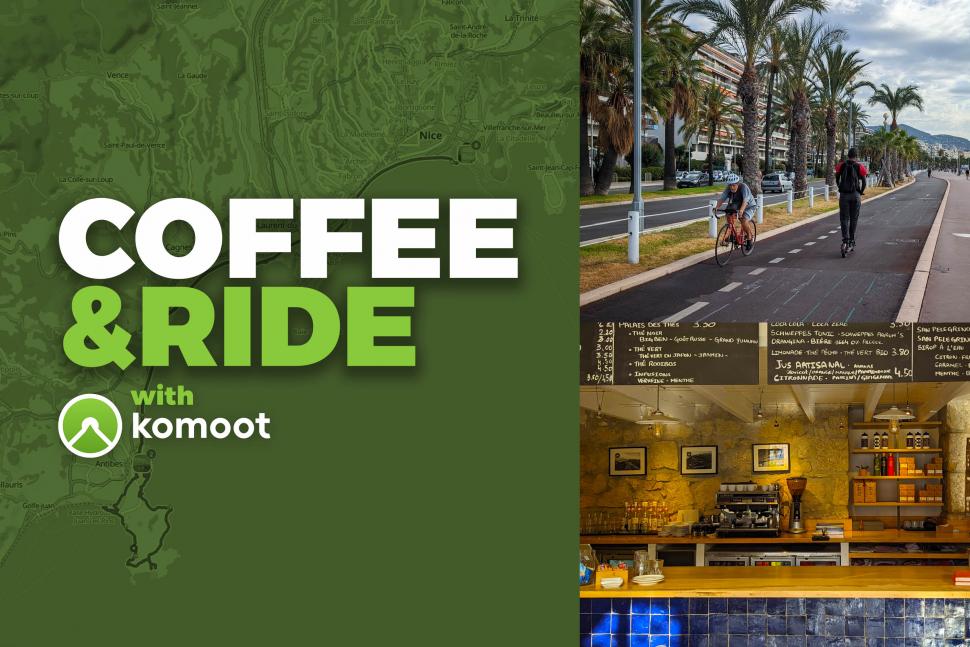 From Nice to Cap d’Antibes and back – with lots of yachts, villas, and a rear flat at the halfway point
by Simon_MacMichael

We've got something a little different in our Coffee & Ride with komoot series today as for the first time we head abroad, with a trip from Café du Cycliste on Nice’s Vieux Port to Cap d’Antibes and back – and as you’ll discover, it was a bit more eventful than planned.

I love Nice, but had never cycled round here before, so hiring a road bike and riding along the coast on this trip was definitely on my list, and as a customer of the Café du Cycliste shop in London’s Spitalfields, I’d always wanted to visit their shop and café here.

The Café du Cycliste brand, founded by former IT workmates Rémi Clermont and Andre Stewart, began life in 2009 in Grasse, the small town in the hills above Nice famed worldwide for its perfume industry. 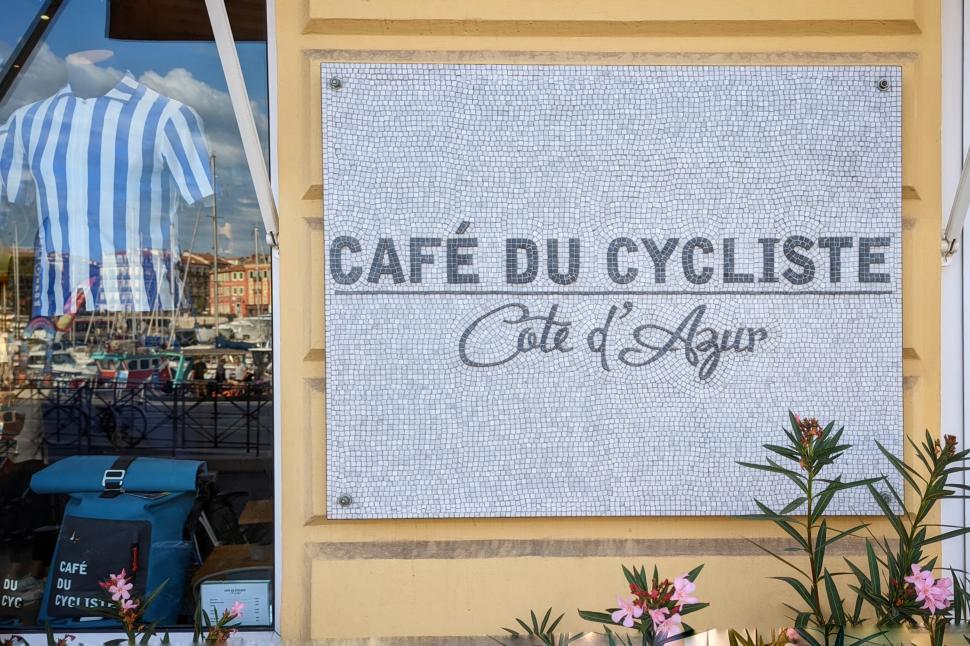 The business quickly grew, with its online presence reaching a worldwide audience, and in 2016 it moved to Nice’s Vieux Port, enabling it to showcase its entire range while also providing a space for cyclists starting or finishing one of regular rides it organises to enjoy a coffee and a chat. 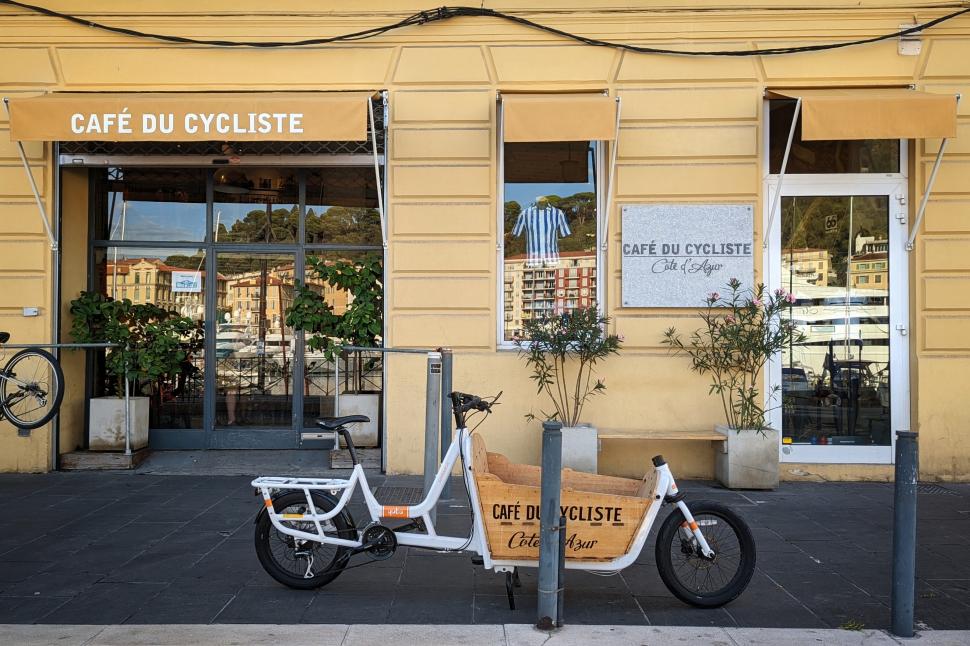 They have a fleet of road, gravel and e-bikes you can hire, though Monday afternoon closure meant I booked a Trek Emonda 5.1 at another shop nearby for the following day’s ride, and before picking that up a quick coffee at Café du Cycliste and chat with a member of staff, which would prove a bonus later. 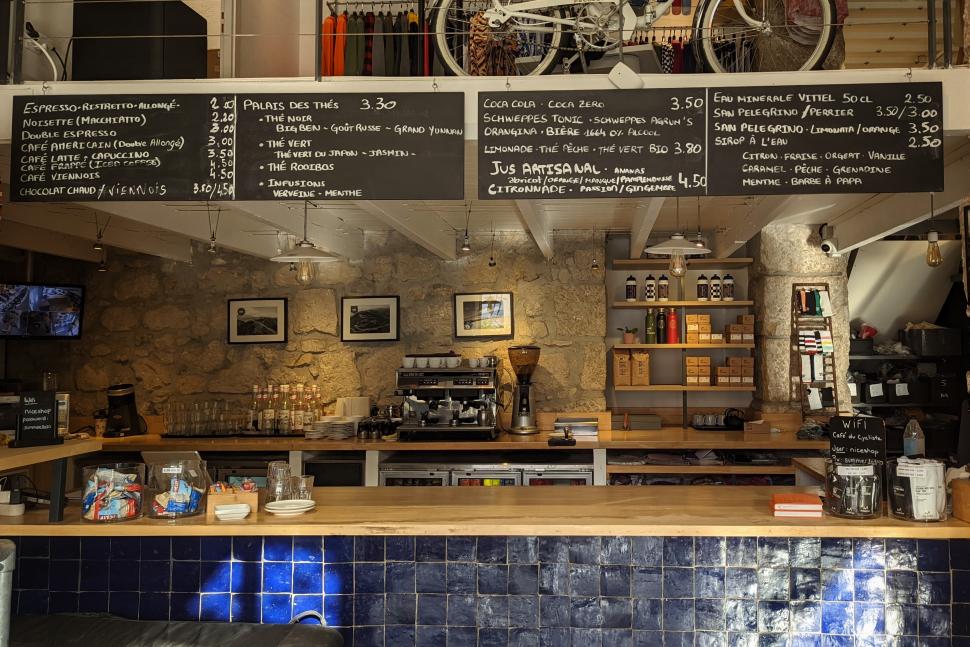 The space itself is fantastic – as you enter, there’s a place on your left to leave your bike, the coffee bar is right in front of you, the café seating area to your right and beyond that the retail area displaying the full Café du Cyclist range, which is also housed in two small mezzanine galleries. At the back, there is a table showing a map of local routes to ride, plus the bikes available to hire. 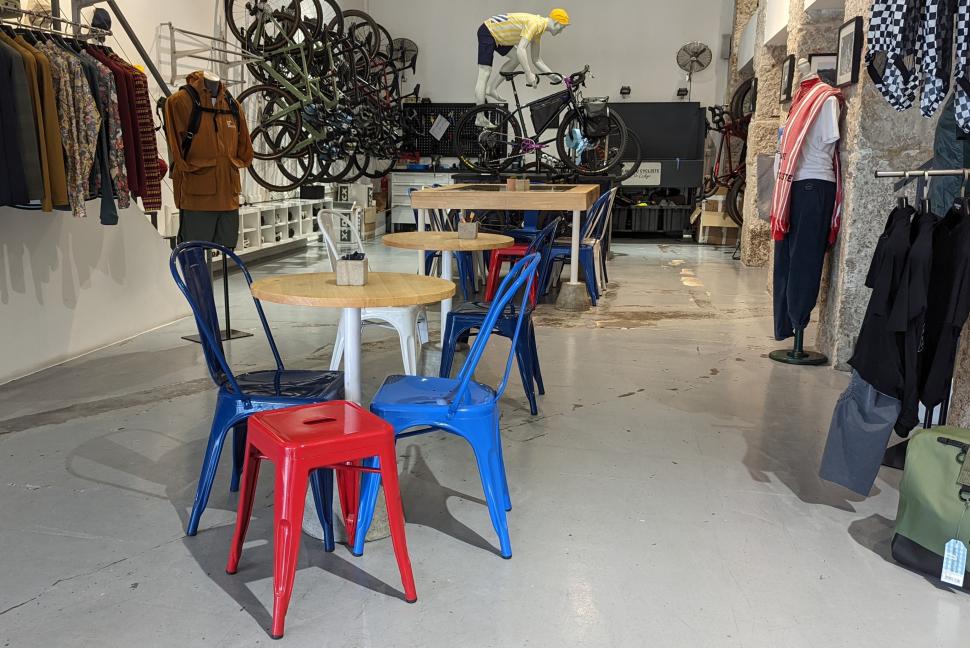 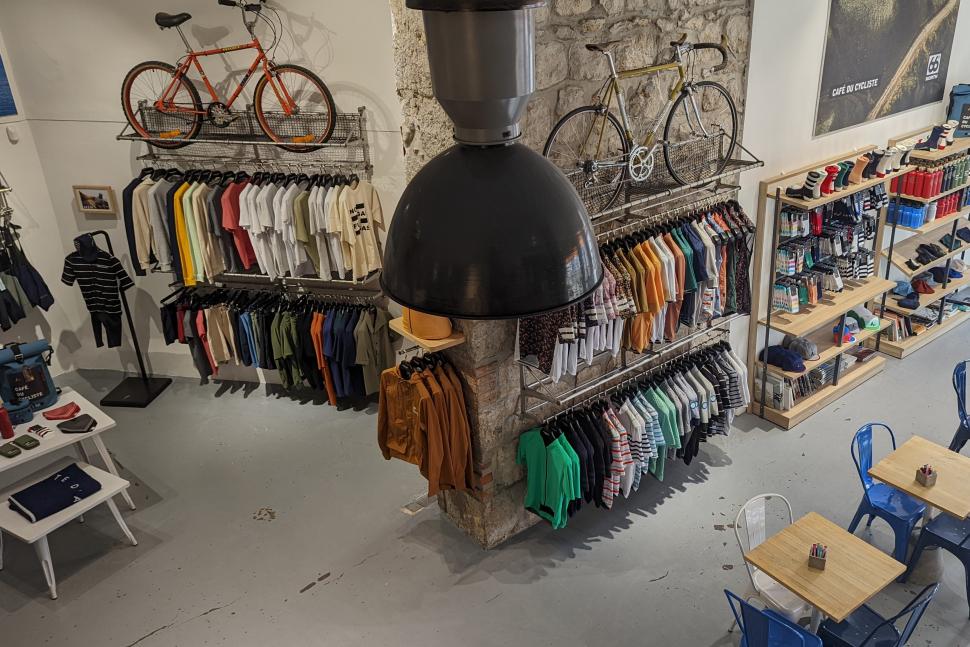 After the caffeine boost and picking up my bike for the day – €40 for the hire at Riviera Ebikes, which stays open till 7pm, this Écossais headed off onto the Promenade des Anglais, stopping for the obligatory photo opp at this Instagram-friendly sign. 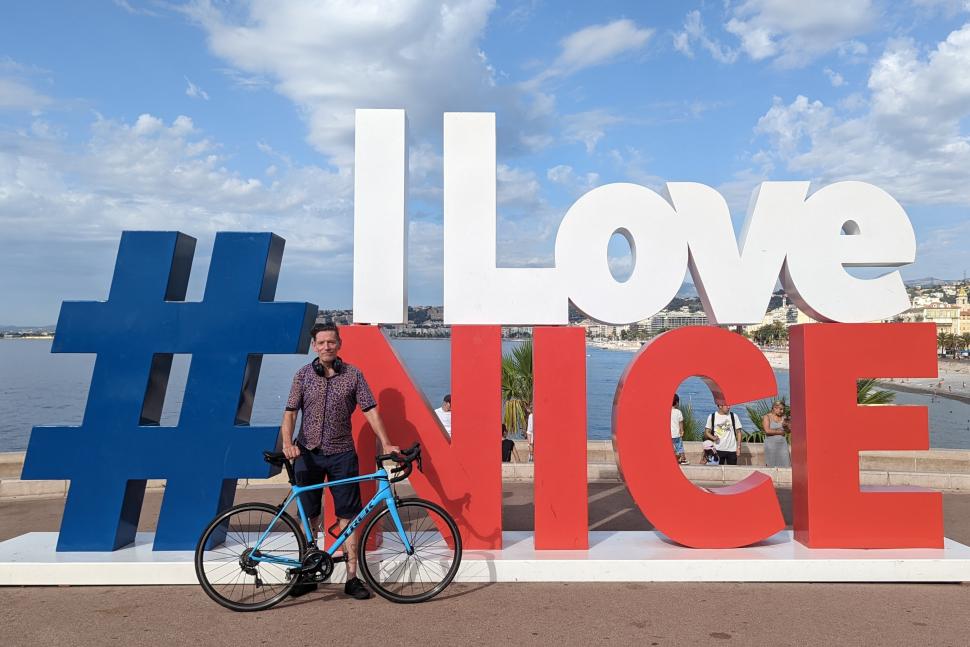 From here until just before the airport, the bike path is wide, straight, and while you need to be vigilant for people stepping out, the unwritten rule is that pedestrians wait for people on bikes to pass.

The path is also used by people on e-scooters, electric skateboards and the occasional jogger, and while there is a 20kph speed limit highlighted every now and again, some cyclists fly past well above that, while others pootle around at much lower speeds – but the width of the path, and people generally being aware of others, meant there was little conflict. 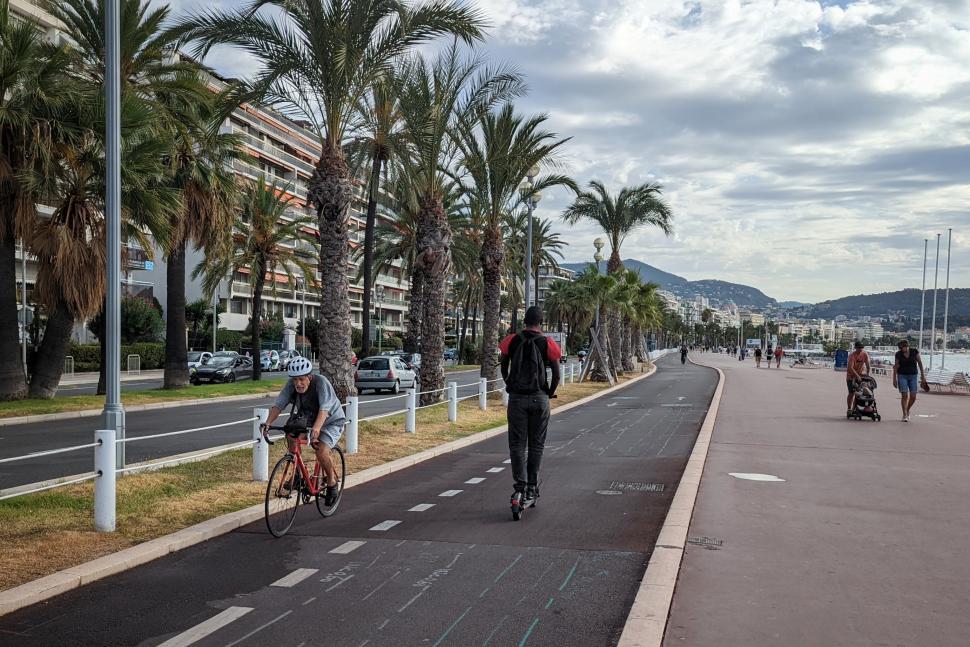 I’d been warned by the guy at the hire shop that once you hit the airport and the succession of towns beyond that, you need to look out for drivers crossing the cycle track as it heads towards Antibes, and with those crossings tending to be at 45-degree angles, and me getting used to the novelty of riding on the right, my head was swivelling in all directions each time I came to one. 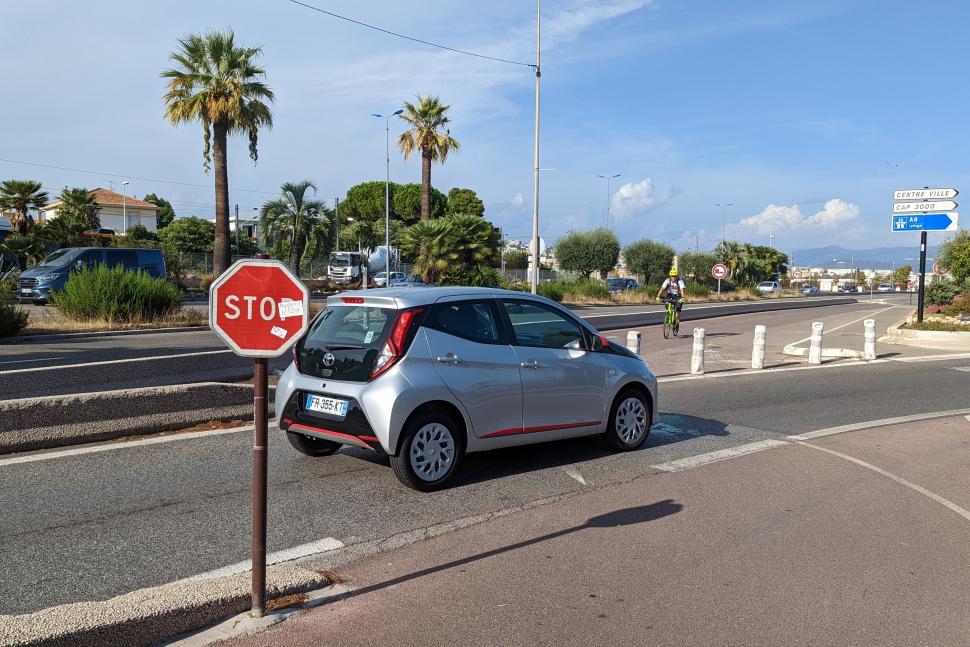 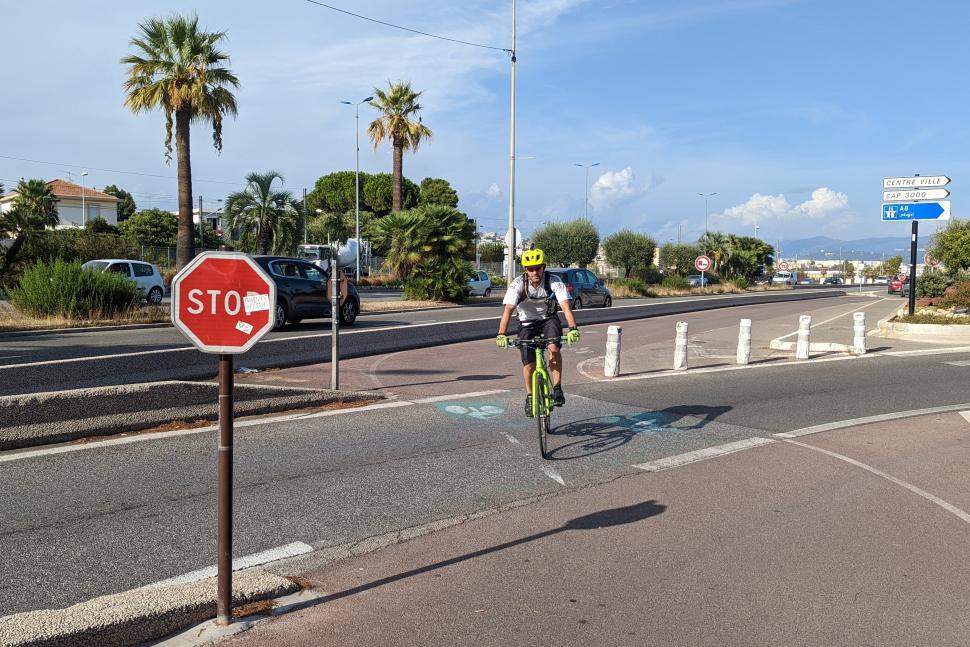 The segregated bike path ends just as you hit Antibes, but given the restrictions on motor vehicles in the old town, following the signposts to that took me away from more heavily-trafficked roads.

One thing about the Riviera, of course, is the yachts … but there are yachts, and then there are yachts. The largest in the Vieux Porte at Nice turned out to have cost $100 million – but the biggest berthed in Antibes was built for four times that. It comes with a helicopter, though, which is nice. 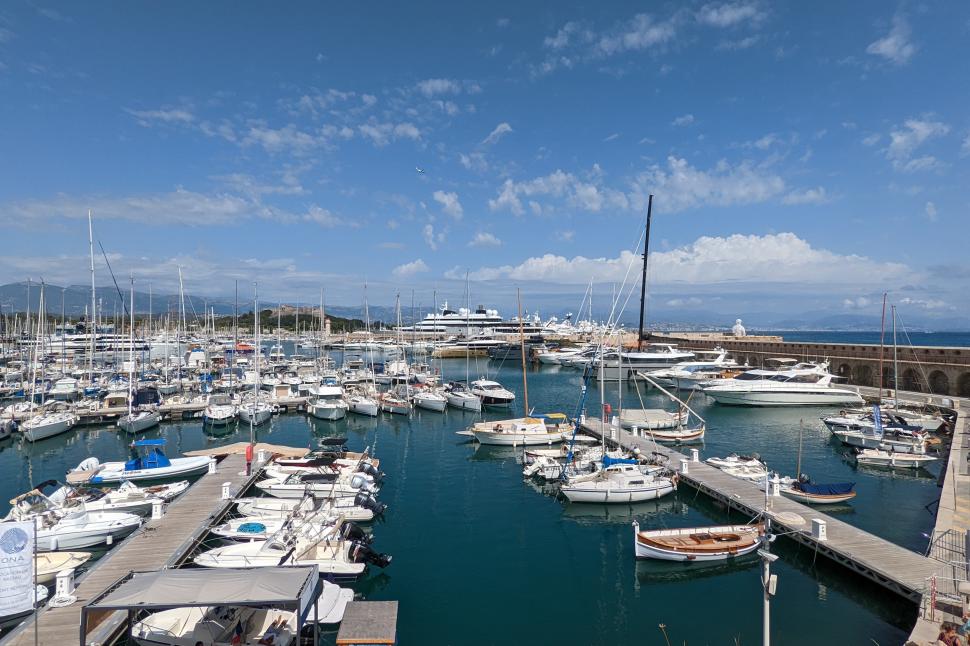 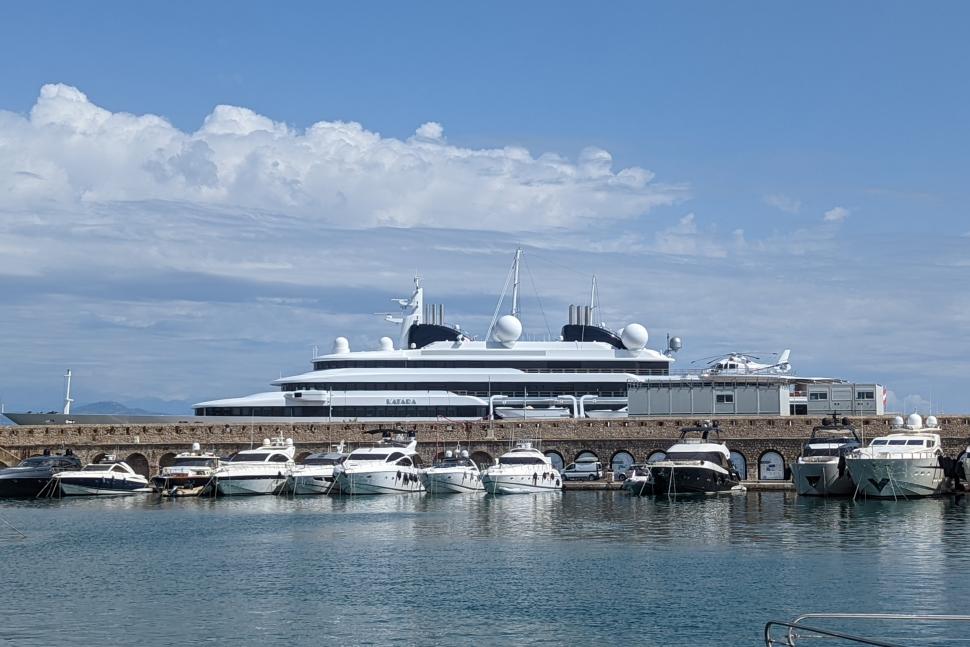 After a poke around the marina and old town, I headed to Cap d’Antibes – home to one some of the world’s most expensive real estate. As with many exclusive residential enclaves, the roads were eerily quiet, most of the other people there being fellow tourists looking for villas to gawp at.

And it was there, at the southernmost tip, that the puncture fairy paid me a visit – and what’s more, the spare inner tube in the saddle pack had a broken valve, which meant a one-hour walk, on a twisting coastal road in 30-degrees Celsius with little shade, to Juan-les-Pins and the nearest bike shop to buy a new one and get back on the road. 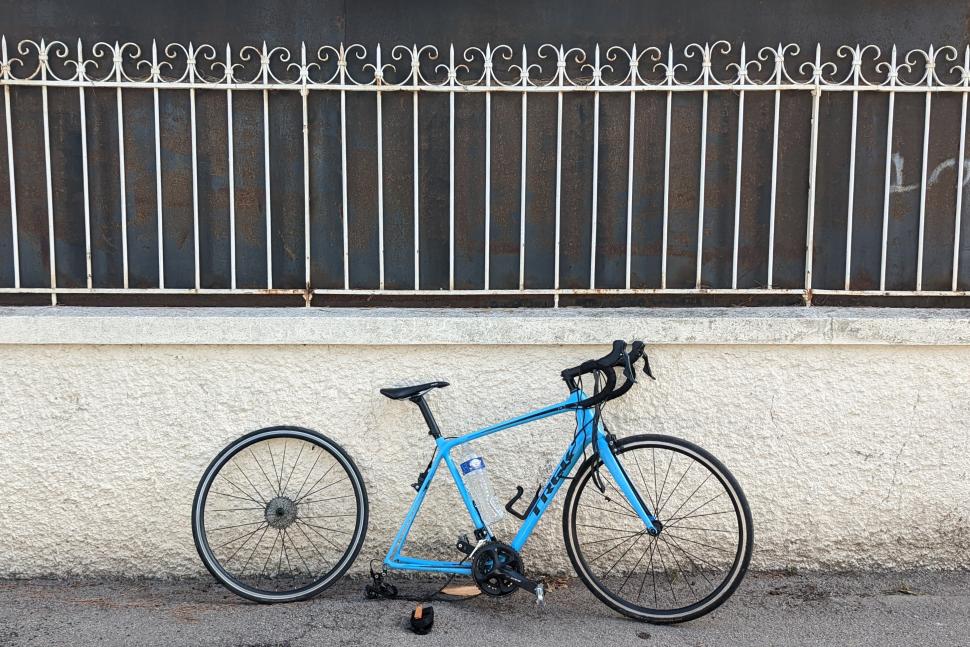 By now, it was gone 4pm, but I knew exactly how long it had taken me to get out to Antibes, and how long it would take to get back – but the flags that some places on the beach have made me realise I’d be riding in a crosswind that would gradually turn into a headwind as I swung round back towards Nice. 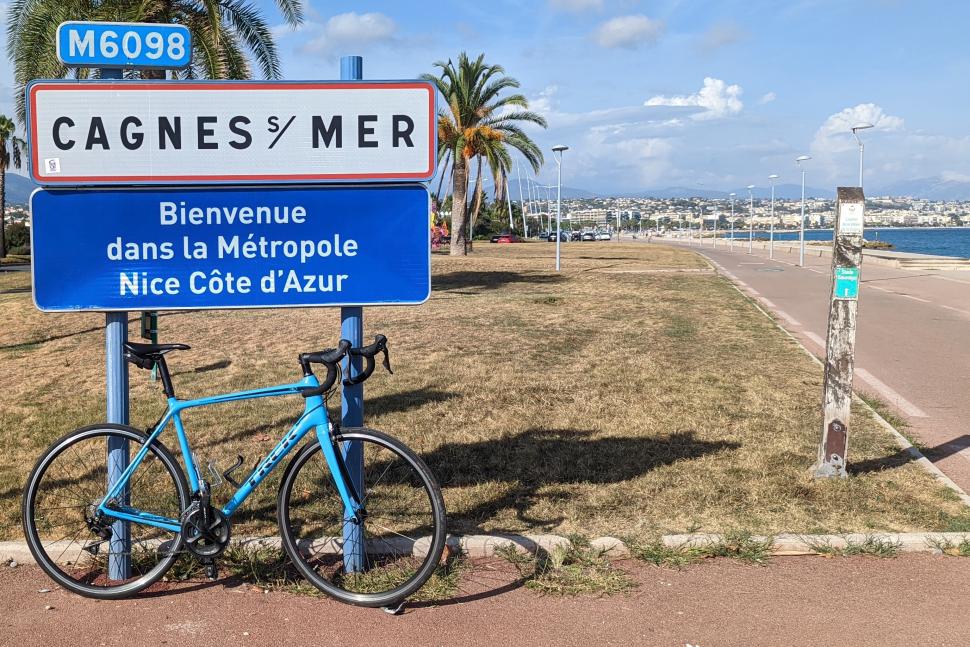 It was a slog back, and I arrived at Café du Cycliste seconds after it closed at 6pm – so a massive thank you to the staff member who remembered me from the morning and let me in, and while the coffee machine was switched off by now, a Coke with ice was very welcome after the day I’d had.

It may not be the most taxing ride in the area – it started and finished just round the corner from where the ascent to the Col d’Eze begins – but it’s definitely one I’d recommend if you’re ever there, puncture excepted. 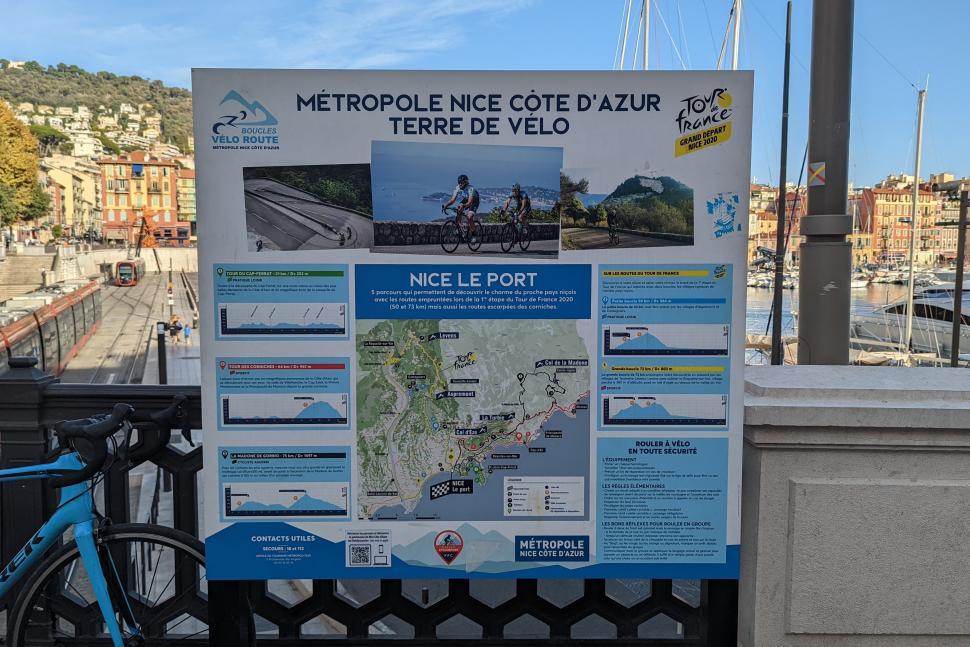 I may have missed my post-ride coffee, but made up for it the next morning with a cappuccino at a place where I’ve watched two of the past three editions of my favourite Monument – Bar Zanzibar in Sanremo, 100 metres or so after the flamme rouge on the last but one corner of La Classicissima di Primavera. 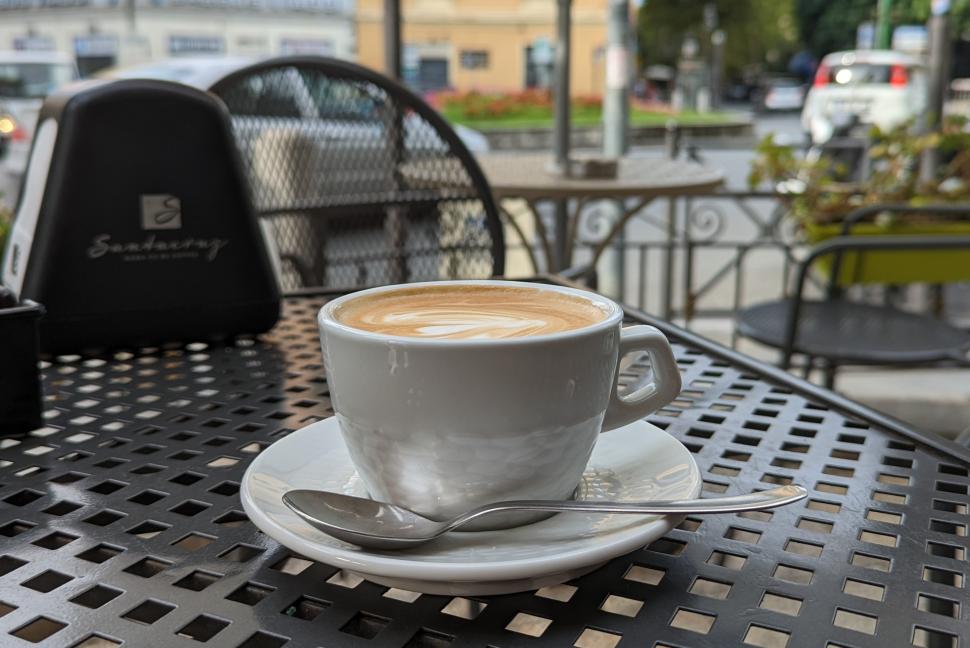 Even on race day, it’s never super-busy – and a TV on the terrace means you know exactly when to step out to watch the leaders and chasing bunch flash by, then get back to watch the charge to the line. No race for me today … but the coffee was good and I’ll be back here, and Nice, next March.

Check out our 'Coffee & Ride' Collection on komoot