Here’s what you can expect from Wahoo’s brand-new ‘A Week With’, ‘Inspiration’ and ‘On Location’ channels on its training app
by Anna Marie Hughes

Wahoo says it has built SYSTM to be “the best training platform in the world”, but what are these unique video-based sessions like to ride? Can it compete with Zwift? Here’s my experience of riding some of the all-new workouts across the new channel categories: ‘A Week With’, ‘Inspiration’ and ‘On Location’.

Now this channel is where you get to go behind the scenes with some pretty famous names, doing their workouts with them, as well as getting to know them off the bike. 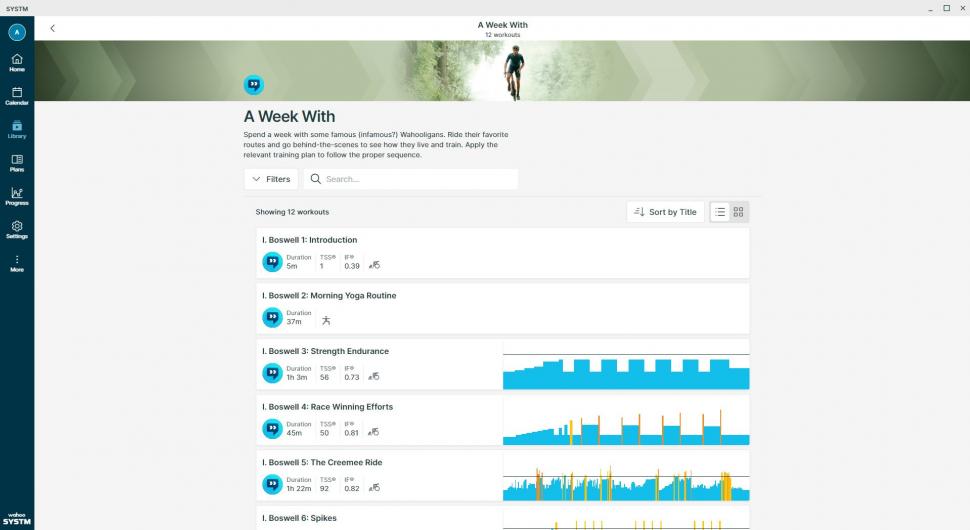 Wahoo have currently got a mini-series of six workouts with both the former Team Sky WorldTour and current pro gravel racer, Ian Boswell, and Wahoo’s very own Neal Henderson—he’s Wahoo’s Head of Sports Science.

I skipped straight ahead to workout 4 of Boswell’s week, as the title ‘Race Winning Efforts’ really intrigued me. Try not to get excited like I did – if you go to the ‘Plans’ section you can apply the ‘A Week With Ian Boswell’ plan so you can follow the sessions in the intended order and spacing (for appropriate recovery in between).

As you might have guessed from the name of this one, it’s a high intensity session—be prepared to push hard.

Boswell talks you through the workout, why he does it, why he likes doing it and how to get the most out of it. The whole workout is filled with lots of snippets of advice as you’re going along, such as how best to replicate this workout effectively on the road.

He’s also doing the session with you, on his local gravel terrain, riding through ‘Mosquito-ville’ as he likes to call it.

After a warm-up, the session consists of a series of intervals which each begin with a full sprint for 15 seconds before knocking it back to threshold for three minutes, and then they’re all rounded off with another max 15 second dig. It’s tough stuff for sure, especially as you’ve got to repeat this three more times. 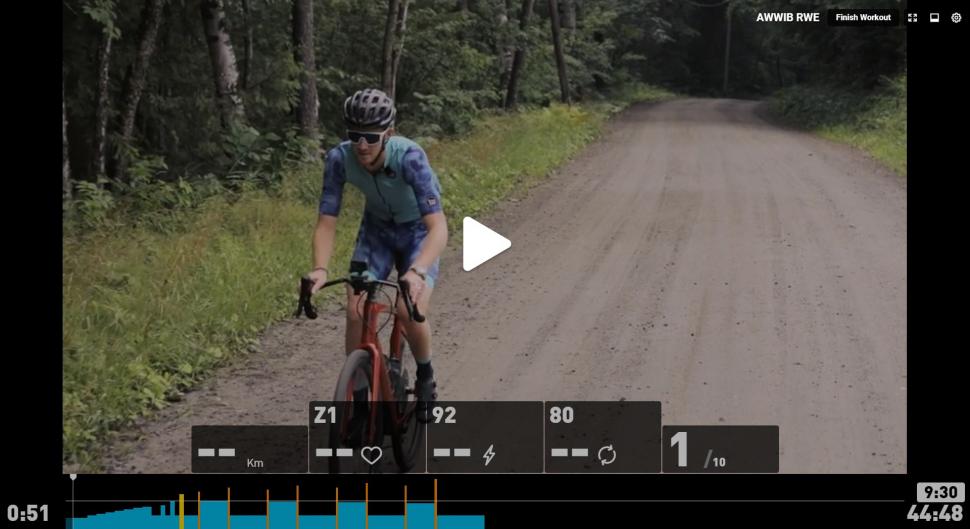 You do the efforts as Boswell does them, you’re in it together basically, and that dynamic really helps you push through I found.

He tells you that he visualises these efforts as one kilometre to go in a race, that you’re attacking off the front of the bunch, holding that gap and then making that final push to the line. I found this way of approaching the efforts did genuinely help me get a lot out of it.

There’s then four minutes of recovery between each interval, which is some quality downtime for catching your breath back and finding out more about Boswell and his life outside of cycling.

He takes you to his favourite fishing spot, a hidden swimming hole, and it’s all wrapped up with him ‘buying you’ a questionable ice cream flavour that he loves once you’ve completed the intervals. As you are just spinning out your legs I found it easy to listen to and enjoy these clips.

Overall it’s quite a holistic experience; you’ve packed in a quality training session, you’ve gotten to know a very interesting person, and also picked up some useful training insight along the way. I’m looking forward to doing the full week with Boswell and seeing who Wahoo do ‘a week with’ next!

In the past I’ve attempted watching movies while trying to pack in some endurance miles while it’s raining outside, but to be honest it turns out I’m pretty bad at multitasking. Even at an endurance pace, something about trying to stay at the intended power output or heart rate, and keeping up with what’s going on in the storyline... well I can’t, I lose track. What doesn’t help is that my data is displayed on my cycle computer at bar height and lifting up to look at the laptop screen to watch, well it’s a lot of back-and-forth. 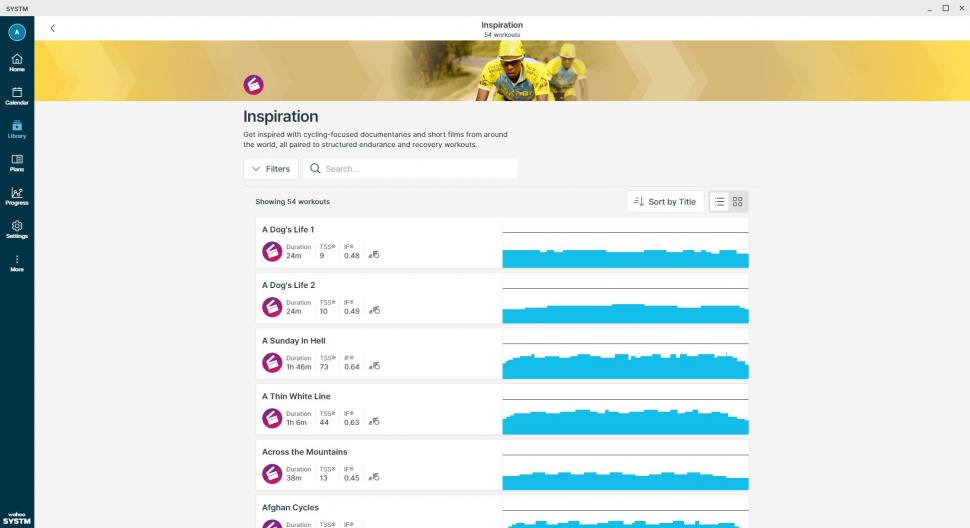 With Wahoo’s Inspiration sessions you’re following an endurance- or recovery- level ride with your data displayed on the laptop screen, with a cycling themed documentary or short film playing in the background. Your head can stay fixed in the same place which makes for a much easier viewing experience.

You’re watching a guy driving a truck, that’s how Changement de Roux begins. It’s a slow start I must say, but you’re stuck on the turbo so you’re forced into finding out that it does get better.

The gist is you eventually discover this straw delivery man is Laurent Roux, a Grand Tour stage winner and wearer of the pink jersey at the 1998 Giro d’Italia, now living his life post testing positive for amphetamines in the early 2000s. He became an outcast in the cycling world. You find out his story and his perspective on the events of his era – it’s a honest recount, that presents an incredibly interesting point of view.

It’s a French documentary with English subtitles. The pace of the one I was watching was slower than most movies and so even with having to read the subtitles, I found I kept up with no trouble while riding.

The intensity of the session matched to this documentary varied between 60 to 75% of FTP which is mostly endurance work, but nudges into low tempo. I found it was a good amount of variation to keep things interesting, without it being unmanageably complicated while trying to enjoy the documentary.

There’s 52 of these in Wahoo’s catalogue right now. I didn’t realise there were so many cycling-focused documentaries and shorts films out there, so it’s great to have these all collated in one place and even better that there’s interesting workouts attached to them too. It was certainly an enjoyable way of getting some lower zone work in on the turbo.

I was transported to the French Pyrenees when I selected the Cirque de Gavarnie video. This workout is all about immersing you in the location you’re riding; and yep I’m convinced, I want to go ride this climb, really climb it. The scenery is stunning. 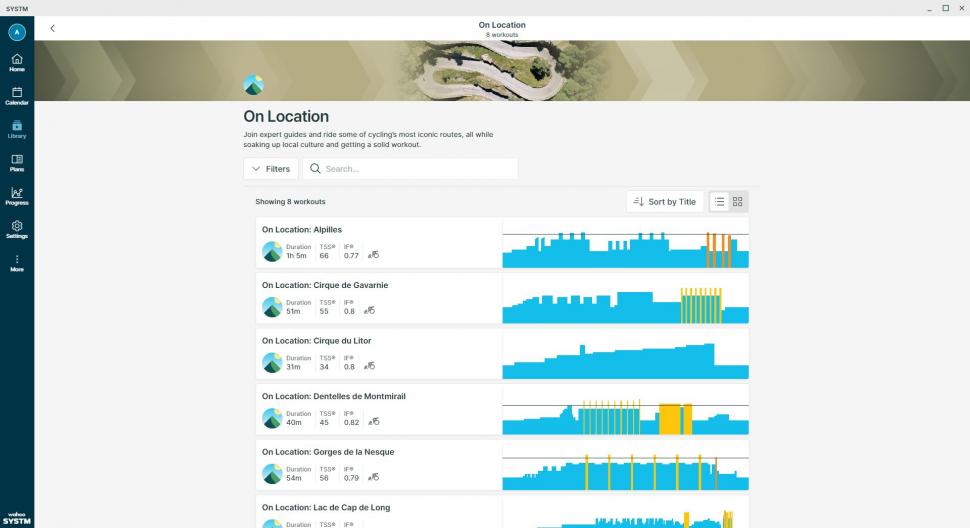 There’s no music soundtrack, instead you’ve got your tour guide Michael Cotty guiding you up the climb that starts in Luz-Saint-Sauveur. He takes you both through the workout and through history and culture surrounding the location, with plenty of interesting story snippets and facts. 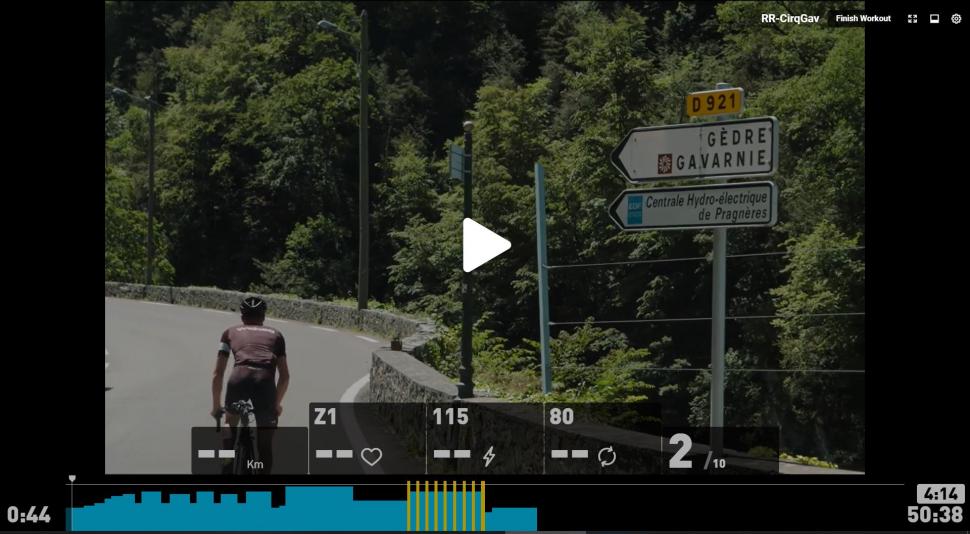 You get to discover a beautiful landscape from the comfort of home and learn about the Bridge of Napolean III, the famous regional spit cakes, and more.

The workout itself was split into three sections with some low cadence strength work to begin with, followed by a threshold block and finished off with some overs and unders. It’s quite a satisfying one to complete as you packed lots in and it finishes off with a sweaty effort.

There’s also one other new category called ‘Pro Rides’ which I’ve not had a chance to ride yet. It sounds pretty exciting though. Basically, Wahoo has attempted to create “the most immersive, realistic race simulation available” by pairing on-board camera footage from real professional races with real power data the pro rider was putting out in that race. Don’t worry though, it’s scaled to your 4DP profile so it’ll be as intense as it was for the pro rider but at your fitness level. 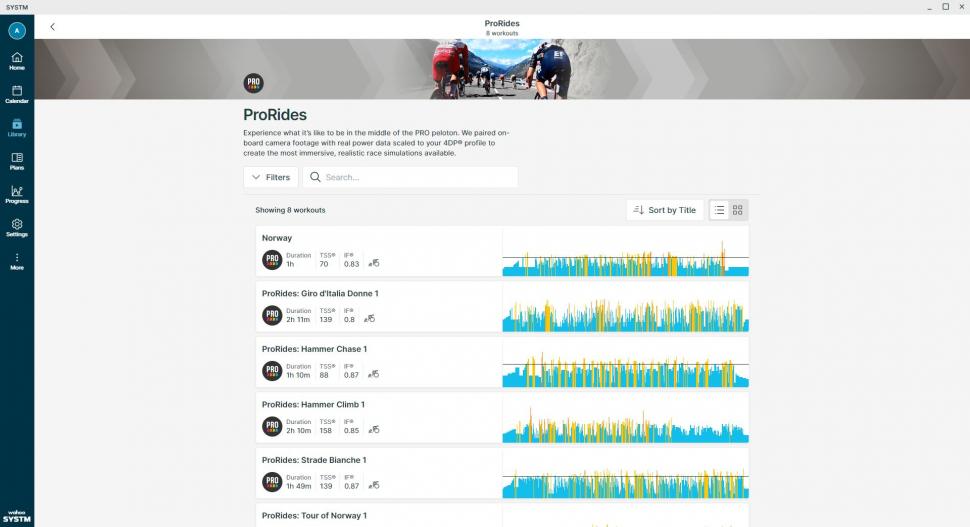 With this format you’ll get to experience different actual racing scenarios, which sounds a load of fun, even if it is proper hard too. Looking at the workout profile, it fluctuates a lot more than usual sessions!

As well as these new categories there’s plenty of old favourites you can mix in. 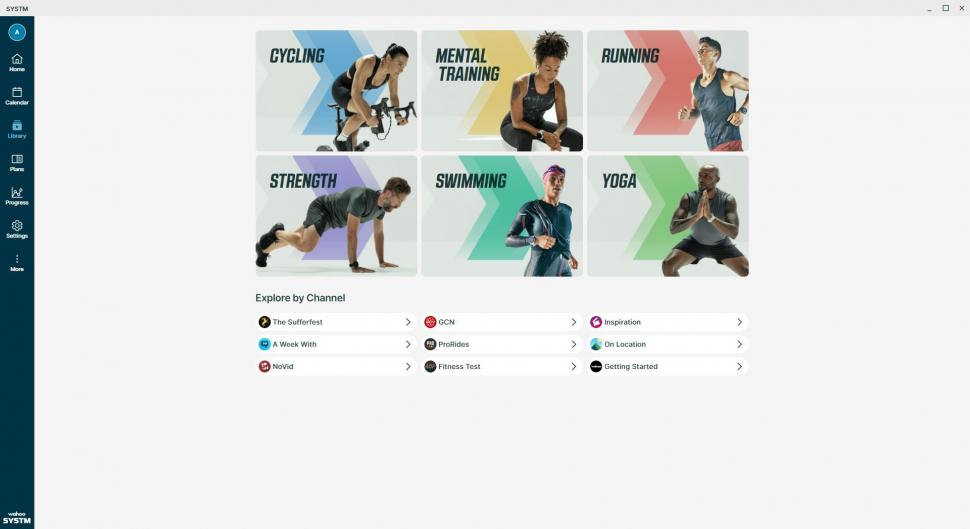 Sufferfest’s infamous workouts can be found on SYSTM. If you haven’t tried one before these are basically incredibly tough workouts with random clips of professional race footage from the archives. There’s also plenty of humour chucked in.

Then there’s an indoor cycling class-style session, with GCN presenters guiding you through the workout as they complete it themselves.

Yoga videos developed with Abi Carver at Yoga15.com are also there for building core strength and flexibility, as well as reducing the chance of injury.

If you've had the chance to try out SYSTM, let us know in the comments below how you’ve found these new video workout formats.