What is it actually like to ride the Paris-Roubaix cobbles?

Dusty, bumpy and terrifying. No wonder we want to go back for more!
by Liam Cahill

It is difficult when asked to describe the experience, to put into words the jackhammer nature that your bike takes as soon as you enter a section of pavé. The clatter of what you can only imagine is your carbon fibre frame being turned to dust is deafening. You’re trying to drive the bike over a surface where you need to constantly accelerate to avoid bogging down and all the while you have to cling onto a handlebar that is painful to hold.

Paris-Roubaix has long been the single day of bike racing that I look forward to the most. The action is non-stop and every bit of the race is interesting. The pavé comes from another world and the changes that riders made to their bikes fascinated me, leaving me genuinely looking forward to the post-race tech galleries nearly as much as the race itself.

To ride the famous sectors is something that I’ve wanted to do for years. I have tasted the stones before, racing the Bath round of the Tour Series in one of the support races. It took in the Crescent and while these are indeed cobbles, they don’t come close to comparing. 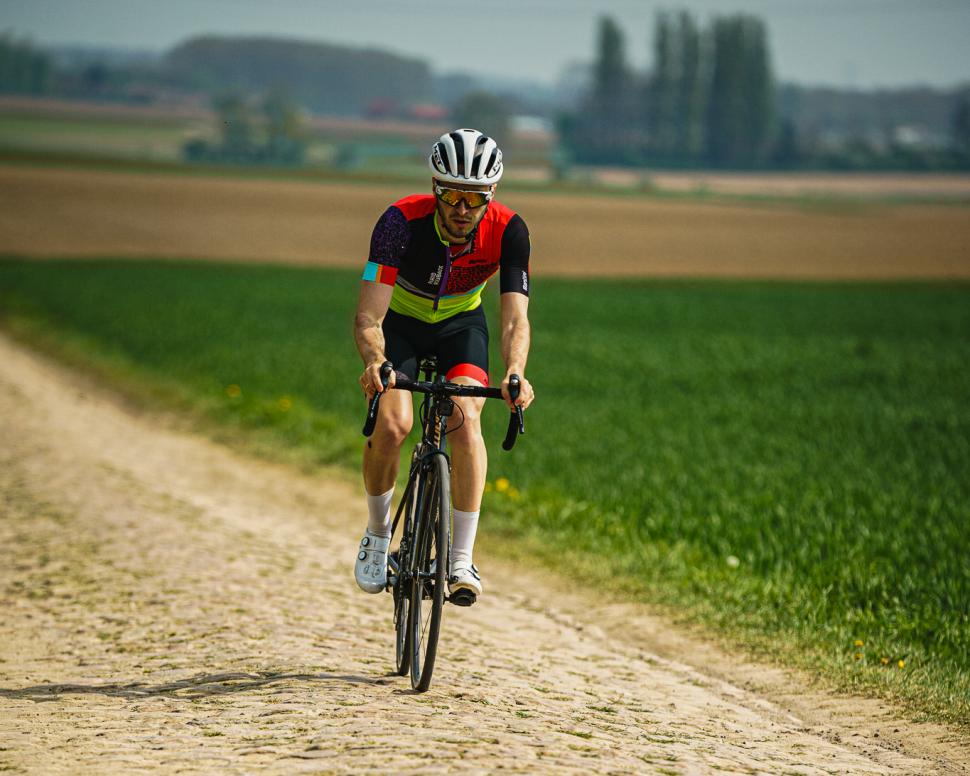 The final stretch of Mons-en-Pevele. Out front is the safest place to be

My first real cobbles then were those of Mons-en-Pevele. As an introduction to cobbles, they don’t come much tougher than this. Starting a few wheels back in the group, I was quickly looking to pass. It wasn’t bravado, or a need to finish the sector first that drove this need, but simply the terror of riding blind on one of the roughest roads in the world. Picking my own line was rather appealing.

The end of this 5-star sector was possibly worse than the actual riding. Trying to brake on cobbles with hands that have been battered and shaken is awful and once we stopped, the effort sank in. Going full gas is the only way to approach these cobbles and a quick check of my data after the ride showed why I was feeling grim. My heart rate quickly climbed to just a few beats below my maximum and that is where it remained. There’s certainly no easy way to get over the pavé. 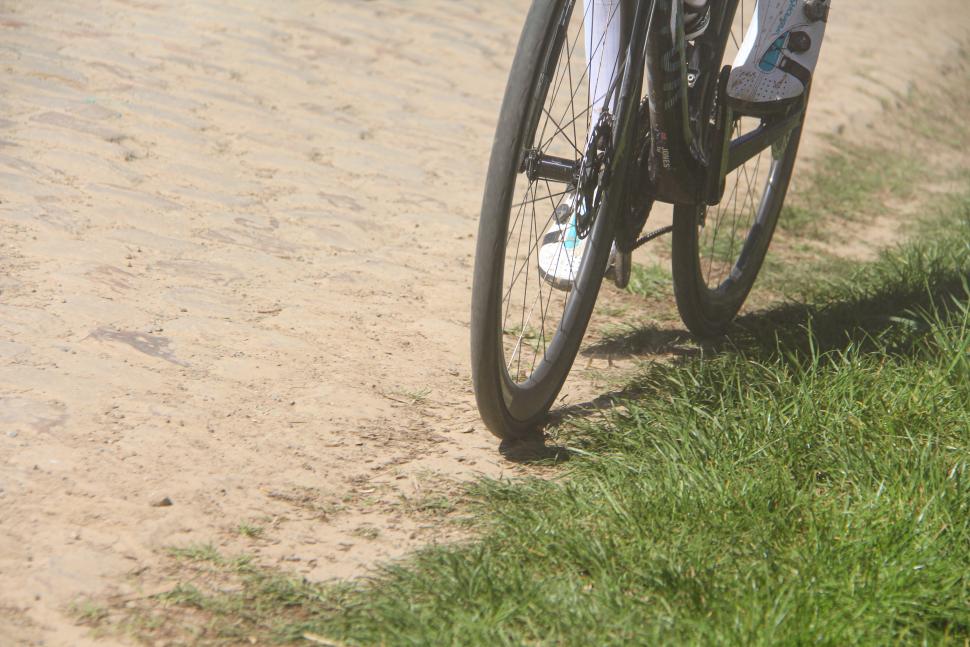 The dust between the cobblestones gets kicked up and yes, it is disgusting to breathe

That first taste of the cobbles also had me thankful for 28mm tyres. The hire bike that I was assigned at the start of the day was equipped with 25mm tyres and, deciding that these weren’t going to do, I managed to scrounge some wheels with 28mm tyres from one of the spare bikes. It was a good move.

The wider tyres allow you to run slightly less pressure and it is this that helps to smooth out the cobbles. Well, it works a little bit. They’re still rather bumpy. 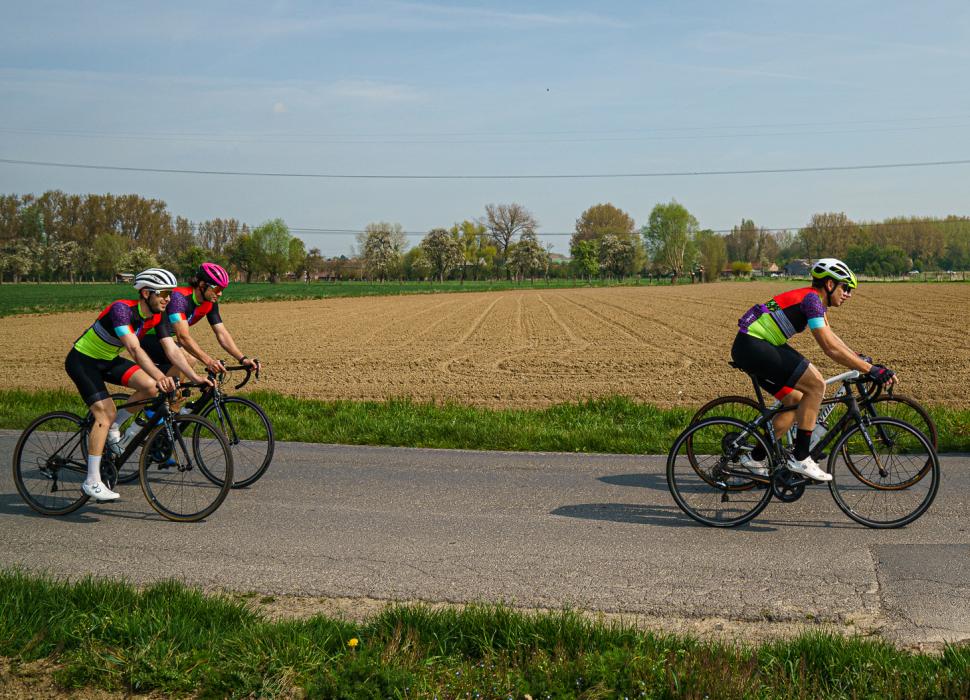 Riding through the next sectors, including Pont-Thibaut, Cysoing, Templeuve and Champin-en-Pevele, it was clear to me just how horrific it would be for the racers. As we rattled along the sectors, we would occasionally catch up to cars and camper vans making their way to their chosen spot for the weekend’s races. The dust that they kicked up was thick and blinding. Breathing while you hammer over the cobbles meant that it was also choking. How the riders get through the day is still beyond my comprehension. 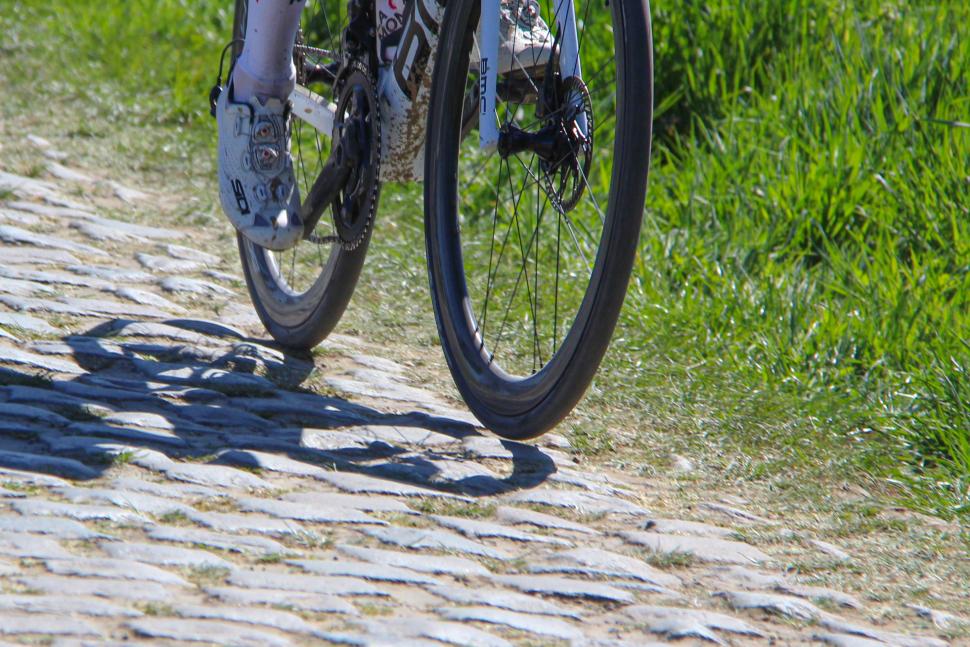 Bouncing along the cobbles

As we rode towards the infamous Carrefour de l’Arbre, which is the final 5-star sector of the race, I took the corner where Matt Hayman rejoined the front group in his victorious year. Going through those bends, it is baffling to think how the best riders take so much speed through what is pretty much the worst cornering surface imaginable.

You have jagged cobble stones that have been shifted to wheel breaking angles through years of heavy farm traffic turning on their huge tyres. Away from these, there is loose dust which, last time I checked, isn’t ideal for traction on road tyres. 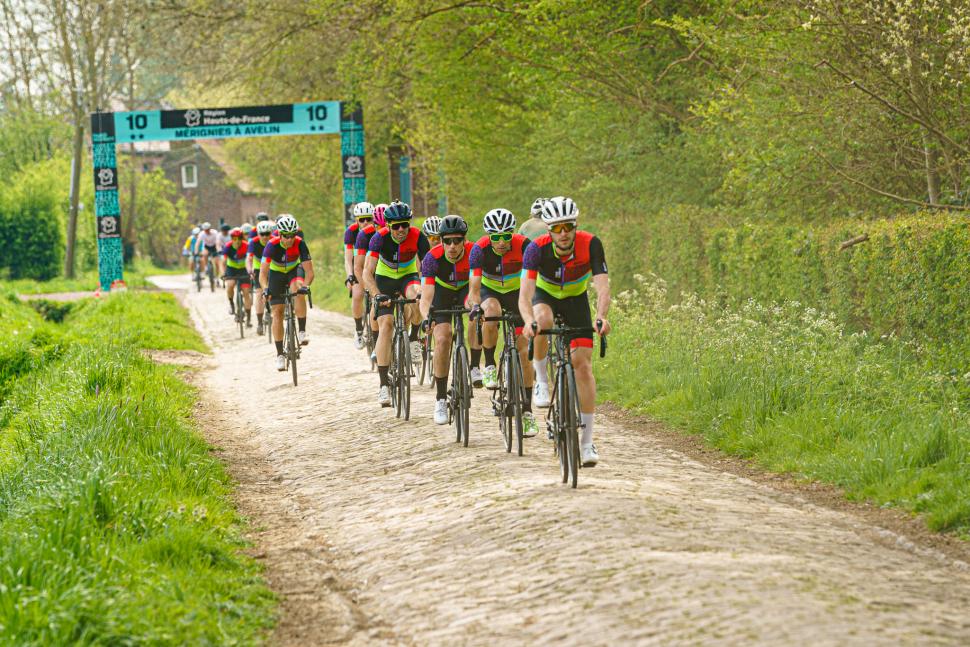 Only a 2-star sector due to its length, but Merignies is still very rough

The approach that I adopted was a well-known one. You try to use the camber on the inside of the corner as a poorly-made berm. You won’t need brakes on the approach to these corners as simply letting off the power will see you slow quickly. And then you shut your eyes and pray.

But smashing my way over the final stretch of the Carrefour was one of the best experiences that I’ve had on the bike. It has left me committed to enter the sportive next year which takes in all of the cobbles and finishes on the velodrome. It is not a desire for more cobbles that I now have, it is a need. I just might not take my own bike.