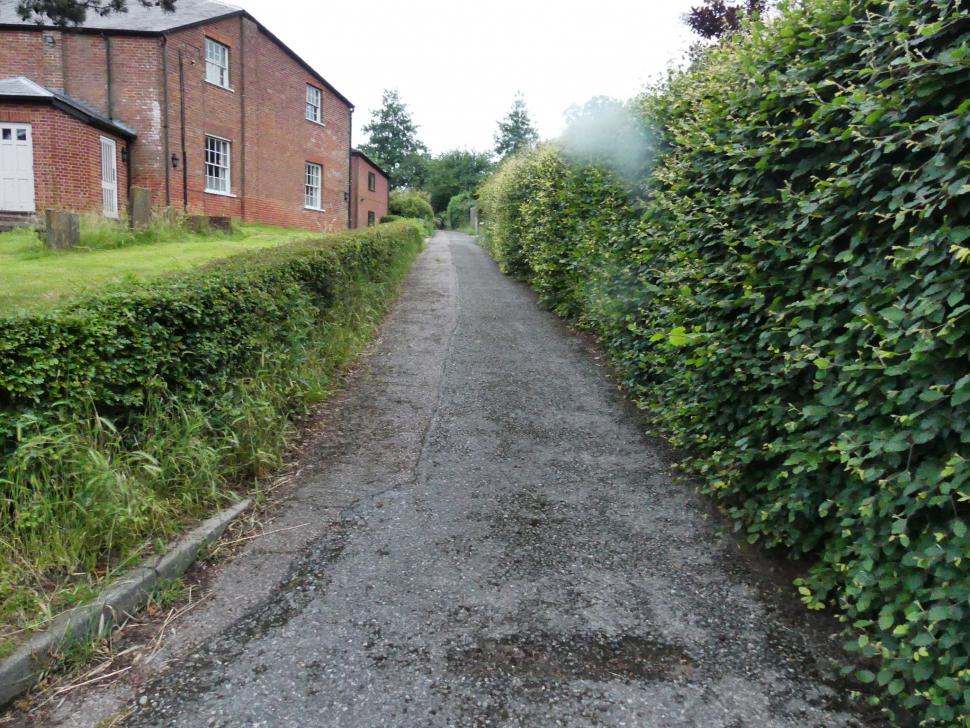 A cyclist from Suffolk has successfully completed an Everesting attempt by riding 1,104 times around a car park outside his house in Fressingfield – climbing around 8 metres each time, but exceeding the 8,848 metres in height of the world’s highest mountain by the time it was over. Martin Riches’ main motivation to undertake his effort was to get a free Le Col jersey – the cycle clothing firm teamed up with Strava for its Le Col x Strava 8848 Challenge, through which hitting that elevation in multiple rides during June entitled users to a one-off jersey, but doing it in a single ride meant they could get it for nothing.

Already a member of the Everesting Hall of Fame after doing one by walking – yes – up and down a steep slope in May last year, Martin was well aware that to qualify his bike ride for it too, the challenge needed to be undertaken in a single activity. 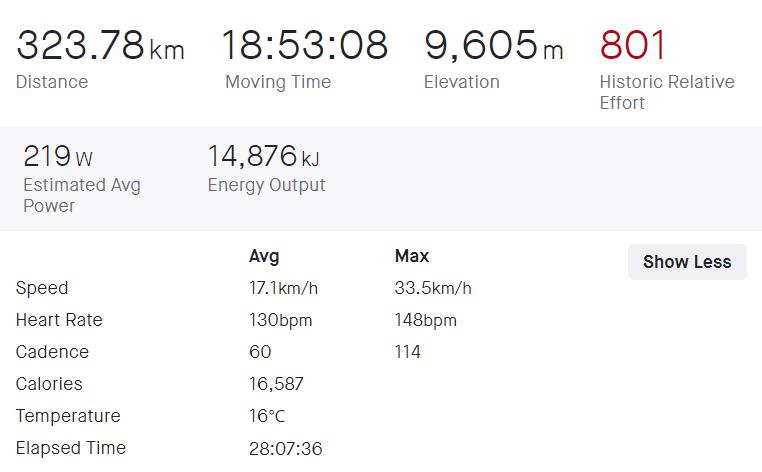 “I just couldn’t bring myself to wear an 8848 jersey without actually doing it, completing it in a month was just a wimp’s cop out and I know even after paying £25 it would have sat looking lovely in the bottom of the shirt drawer for ever reminding me I was weak,” he told road.cc.

A spur of the moment decision to go for it

It was a last-minute decision to go for the challenge last weekend, he confessed. “I came home from work on Saturday afternoon went to the shop for sugar supplies got changed went outside and set about it. I should have got some sleep first really as at 1am I really struggled and these were planned to be my golden hours with no one about and dark so I could see cars at the junction easier. “Then at 9 hours and 90 miles my worst nightmare, rain, normally not an issue but my Bryton [GPS unit] doesn’t like the rain, everything works except the barometer, and the wet roads made it dangerous and slow. Whatever happened I had to be able to stop at the road junction.

“So I had to sit it out for a while, and with time on my hands to think I nearly gave up. Only halfway-ish and a long way to go.

“I went indoors and told the wife I’ve done going to have to abandon the attempt but she wasn’t having any of it telling me that if it took 30 hours I’d have achieved something, stop now and you’ve wasted nine hours. So I waited a while and the rain stopped the roads dried out and the wife shoved me out again.”

The advantages of Everesting on your doorstep

As for his rather singular choice of course? “As I have a full-time job and four kids, ride time is limited to a certain degree and living over in Suffolk vertical metres have to be worked for,” he explained.

“So with limited time, say an hour or less each night, I pecked away at it [the month-long 8848 challenge] but had to stay local in the village as time spent travelling to a bigger hill was time not racking up vertical.

“And even if I had travelled, I would waste at least a half hour to find a fifty foot hill.  The biggest in the village would give me forty foot but involved turning on a corner on a ‘main’ road ok at night for an hour but not a sensible option for an Everesting attempt.

“Then one night I decided to rip around the block right outside the gate a few times to warm up and found although there wasn’t much gain each rep but the vertical metres per hour were just as good.

“Then the plan was hatched a doorstep Everest literally, a hall of fame flag on my doorstep and possibly a record for the most reps in a single Everest, perfect.” Martin carried out the attempt on “a Claud Butler Vantage ridged mountain bike from around 1996 era, slightly adapted for road use with a 48 triple on the front instead of the 42 and 35mm Marathon tyres around the 16kg mark as it stood with water bottle.

“The one gear was all I needed just to get up the hill plus the gear I wanted was a bit dicky and if I hit the lever and changed, it might take a couple of laps to get it back again and I really didn’t fancy a knacker cracker,” he said.

The most boring Everesting ever?

He rejected thoughts that his bike ride may have been the most boring Everesting ever, however, saying: “With the exception of some excellent Strava art show me a red line on a map which looks exciting … the very concept of Everesting is boring, one hill for as long as it takes to climb 8848 metres.

He believes that anyone who has been riding for a few years will be fit enough to complete one, but said, “The real killer is the mental battle with yourself. At some point you will want to give up and in my experience it’s about halfway, by that time you’re going to have been riding, walking or running up and down for hours and hours you will be feeling it and you suddenly realise you’ve got just as many or probably more hours to go.

“This is the point where the weak willed will give up, they are not physically broken, probably legs ache a bit, arse is numb, but they don’t need an ambulance.”

Of his own ride, he said he had no time to be bored. “I had to miss the bollards with the handlebars then watch for pedestrians, then a car park exit and entrance, a junction onto the road then another off it again, any mess up and you’re going to either get injured or injure someone else not to mention all the tiny little tarmac imperfections and holes. 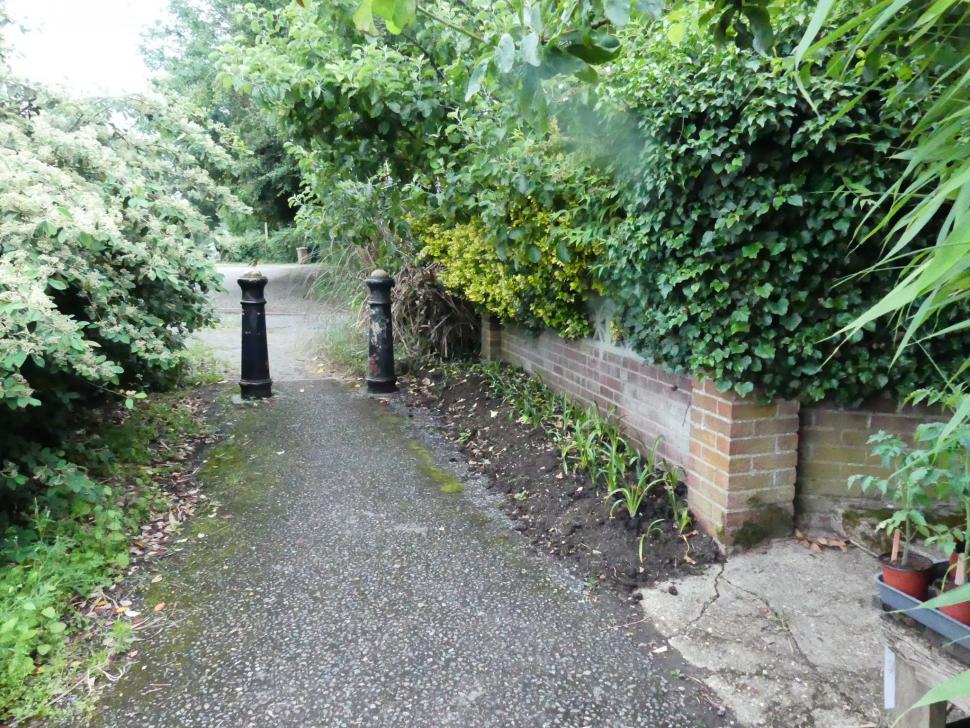 “Go round ten times they aren’t a problem, but after a few hundred times every little hole feels like hitting a brick and have to be avoided at all cost because of the toll on your backside and wrists is immense.”

Comparing his two efforts, Martin – who a few years back picked up a serious knee injury while playing hockey, meaning his right leg “can come apart at the knee and swing about,” said that the challenge on foot, completed on a steep slope near his home, was by far the tougher, and that doing it “on a bike is like a walk in the park in comparison.”

He continued: “A bike has gears to help you. You only need to pedal half the distance and can have a rest downhill. To complete on foot either you have to cover huge distances or a massive gradient, in my case a vertical face of 77 per cent.

“Anyone who has hill walked or mountain climbed will tell you the hardest part is the descent most hill injuries and falls happen on the down not up the feet tilt forward and the backs of your legs and ankles burn bad and it’s totally relentless stop walking you stop moving.

“I lost count of the times I came down that bank on every part of my body except my feet I was bruised, cut, stung and scratched from head to foot.

“Afterwards I could hardly walk for days and it took over six months to more or less recover. It probably wasn’t my finest plan but I gambled on the steeper I went for the less distance I had to travel. I’ve never walked up a hill more than once since,” he added.

Despite completing successful Everesting challenges by bike and foot – something he believes only three other people in the UK, and one in England – have done, he may not be finished with it, because he was aiming both times for another altitude target.

“After this attempt I told the wife I had done with Everesting but twice I’ve missed the 10,000-metre mark by running out of battery, which kind of bugs me,” he revealed.

“Maybe I’ll borrow a trainer and take the easy boring option and do a Virtual Everesting and complete the triple, going to be a Sunday bimble with no wind, no rain, no dark, no junctions, no cars, no pedestrians and no potholes, just extremely boring,” he added.