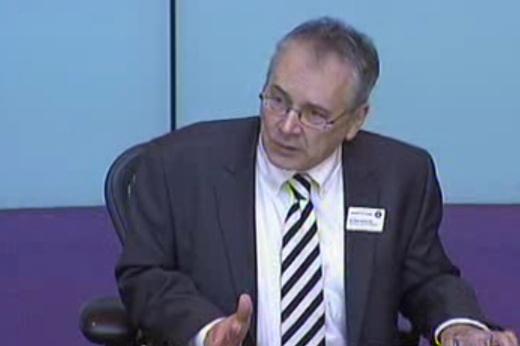 TfL commissioner admits underspend of cycling budget is "an embarrassment"

Sir Peter Hendy tells London Assembly Transport Committee that mayor is pressing TfL hard to "get some stuff on the ground"...
by Simon_MacMichael

Transport for London (TfL) commissioner Sir Peter Hendy has admitted that the organisation's underspend of its cycling budget is "an embarrassment" and that it  “could have done some things better” when it comes to delivering cycling infrastructure for London. He has also revealed that body is under pressure from Mayor of London Boris Johnson to “get some stuff on the ground.”

Sir Peter was responding to questions put to him on Wednesday by Green Party Assembly Member Darren Johnson, who has repeatedly challenged TfL on its underspend on cycling, at a meeting of the London Assembly’s Transport Committee.

The session covered topics on a variety of topics including Crossrail, proposed London Underground ticket office closures, proposals to run the Tube all night, and cycling.

Last month, the Transport Committee published a report that claimed that cyclists in the capital feel less safe, casualty rates are rising, and that safer infrastructure such as segregated cycle lanes should be introduced “without delay.”

In January, Mr Johnson claimed that there had been a total underspend from 2008/09 to 2013/14 of some £150 million, insisting that the amounts involved were being accumulated to year on year.

That was a claim that TfL rejected at the time, with its director of surface transport, Leon Daniels, saying: “There is no cumulative underspend of £150m.  Any underspend from an individual year is rolled forward into the next year’s budget as part of the business planning process."

“The other thing is a resource issue and I really think we are trying as hard as we can in many, many directions to do this,” he added.

“You are starting to see some of the fruits of it in terms of schemes that are now being designed in a way that is manageable in traffic terms, I think you’ll begin to see some real stuff on the ground,” he added, saying that the mayor, who chairs the TfL committee, was exerting pressure to make sure that was done.

But pressed further on the issue of underspend on cycling, and asked if there would be one in 2014/15, Sir Peter admitted, "I don't know."

Referring to the additional staff TfL is recruiting to carry out its plans for cycling, he went on: "We always try and produce a realistic budget. One of the reasons for the increase in the numbers of people is because we've got to up our capacity to design these things.

"I would hope that we would get a lot closer to spending this money. The mayor is pressing really hard, and also not too politely, which is reasonable, to actually get some stuff on the ground. So we're trying as hard as we can but you can't do it until you've designed it and you've got to go through the consultation process.

On the subject of the underspend, he said: "I get it as well. What this underspend represents is frankly an embarrassment, because you ought to be able to get this stuff out of the door except we're trying to do more and better stuff than we did before.

"If all you do is paint lines on the highway - even that's not simple, but it's at least easy - if you're going to indulge in physical construction work, you've got to have a scheme, you've got to be able to fund it, you've got to satisfy all stakeholders and then you've got to do it.

"And even in the course of translating 'doing it' you've got to be careful, because one of the characteristics of doing things at least on our own road network is you've got to phase doing it so that doing it doesn't create its own congestion."

Earlier, Mr Johnson had asked him: “Can you just explain how TfL is delivering the improvements for cyclists? We understand they need to be quality improvements, it’s something we’ve pushed for, but cyclists also want them delivered quickly.”

The TfL commissioner replied: “They do but they’ve got to be delivered properly. Even the cycling commissioner [Andrew Gilligan] who expresses huge frustration, not always politely, to some of my staff about the speed at which it’s done has come to realise I think that altering some of the most crowded roads in London is sometimes a difficult thing to do.

“We’re learning, we’re not too proud that we don’t admit that we could have done some things better, and I think the climate has changed as well.”

The past fortnight has seen a series of announcements from the mayor and TfL regarding major projects designed to make the streets safer for people on bikes, including £300 million being spent on 33 locations in London under the Better Junctions programme, works at a further 17 junctions, many of which have a cycling aspect, and this week’s announcements relating to the three trial Mini-Holland boroughs and the first two Quietways routes.

Those were among the topics covered in last year’s Mayor’s Cycling Vision, and Sir Peter admitted that drawing up that document and starting to implement its pledges had led to a “hiatus” in rolling out infrastructure, partly because of TfL having to recruit engineers able to turn the concepts into reality, and also because some projects had to go back to the drawing board..

“The publication of the Mayor’s Cycling Vision is a very big step forward in trying to deal with it all,” he said.

He also outlined some reasons some of the barriers encountered a project being announced and it being implemented.

“It is quite difficult to do and there is a lot of public consultation to be carried out, and the boroughs who own most of the roads will find that’s something they have to do.

“Even putting more cyclists down quiet roads and making some cycling facilities which may take out residential parking spaces sounds quite easy in conceptual terms, but not if it’s your parking space, and particularly not if your car’s there,” he added.

You can watch the a webcast of the full exchange on cycling here. It starts 2 hours 40 minutes and 45 seconds in.