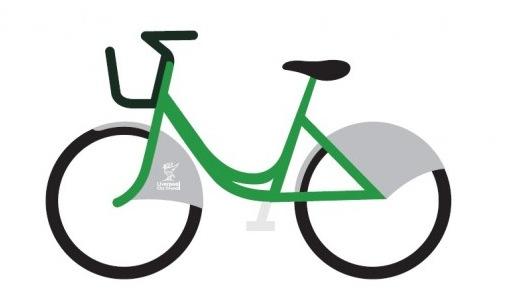 First hire stations go live next month with 100 bikes, increasing to 1,000 at 100 locations within a year
by Simon_MacMichael

Olympic gold medallist and former world champion Chris Boardman has this week helped launch Liverpool’s new City Bike hire scheme, which goes live next month and by this time next year will be the biggest in the UK outside London.

Hoylake resident Boardman, who champions the scheme and who is also policy advisor at British Cycling, says that he wants the bikes to become a part of everyday Liverpudlian life, used by locals to get around the city.

The name of the scheme was chosen earlier this month following a public vote, beating off two other shortlisted options – Pop Cycle, and the does-what-it-says-on-the-tin Pool Bike.

Following next month’s launch there will be 10 city centre hire stations stocking 100 bikes. The second phase of rollout will see 500 bikes in 50 locations come July, and it will be further expanded to 1,000 bicycles at 100 hire points by March 2015.

Boardman told the Liverpool Echo: "I want to see normal people in normal clothes seeing this as a normal way to get around - with the emphasis being on the word normal!

"There is no chain so there is nothing to catch your hands on and there are mud guards built in for the British weather.

"LEDs are so low on power that you only have to ride it for about two minutes and then they stay on say if you stop at a traffic lights.

"The tyres are Kevlar reinforced so they are puncture resistant.”

The £1.5 million cost of the scheme is being met from the government's Local Sustainable Transport Fund.

The scheme will be operated by Bisley, Surrey-based HourBike, which currently operates schemes in Nottingham and Dumfries – both of which have found themselves in the spotlight over low levels of usage – as well as in Lincoln, Reading and Southport.

Previously, the company operated a now defunct scheme in Cardiff, and one in Blackpool, the biggest in the UK prior to the launch of the Barclays Cycle Hire Scheme in 2010.

That scheme, closed for the winter, was taken over by local community enterprise Cycles Recycled for last year’s summer and Illuminations season, with the local council having earlier expressed concerns over affording the near-£100,000 cost of operating it.

Speaking of the Liverpool scheme, HourBike managing director Tim Caswell said that hire costs had yet to be finalised with Liverpool City Council.

Options will include one-day and weekly rates, plus an annual subscription, anticipated to cost £60.

“The annual subscription would include the first half hour free, so once you've paid your subscription, when you think most of the trips you would make would be within half an hour, then you would almost have free use of the bikes," he explained.

"Financial sustainability is important to a scheme, so we do ask people to make an investment to use the bikes.

"Once they have signed up to the scheme, cyclists would be give a PIN code to access a bike and take it out for a ride. They then just return it to a station."

Councillor Tim Moore, the city’s cabinet member for transport and climate change, added: “It's an exciting scheme and it's at the heart of our plans to make cycling a much more popular activity in Liverpool.

"It could attract maybe people who haven't cycled in some time, who want to get on a bike once or twice a week, or a couple of times a month, and they might go on from there to be much more regular cyclists. This gives people the opportunity."

Some local cyclists are sceptical of its potential, however.

Dan Kenyon, road.cc contributor and photo editor of the magazine SpinCycle, says he has reservations about a scheme designed “for a city centre that is mainly pedestrianised and takes just 20 minutes to traverse on foot.”