Third tier road groupset gets the electronic treatment, plugging the gap between Record and Athena
by Mat Brett

“The Campagnolo Chorus EPS groupset takes a great deal of its DNA from its mechanical counterpart as it represents a more accessible version of Campagnolo performance, quality and attention to detail but delivers it in the laser-like precision package of an EPS drivetrain,” according to Campagnolo.

Chorus EPS comes with composite brake levers and like all the existing EPS groupsets it has a thumb shifting lever positioned on the inside edge of the shifter body. Unlike the lever on Campagnolo’s mechanical shifters, it’s angled down towards the ground so it’s easier to operate whether you’re on the hoods or the drops. 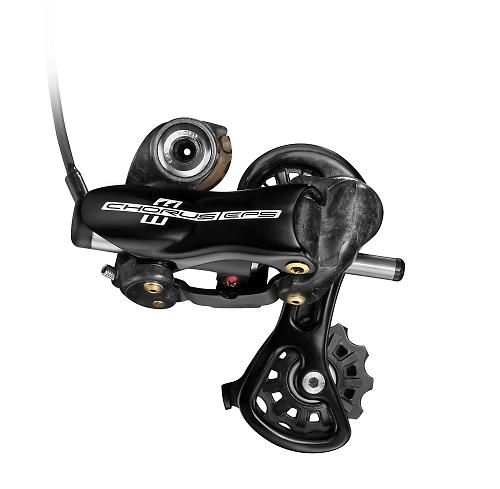 Campag say that the shifting performance of Chorus EPS is exactly the same as that of Super Record and Record EPS. 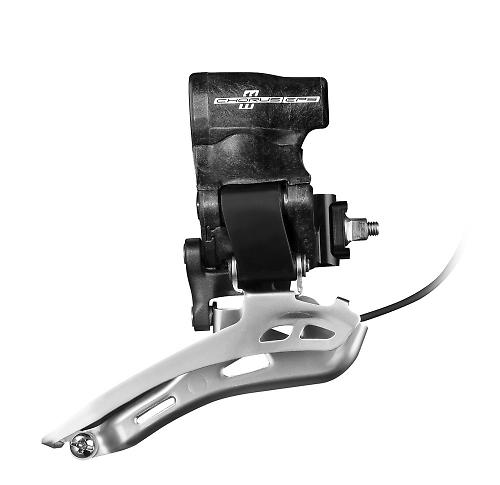 “Its extremely powerful motors are capable of producing levels of torque without rival in electronic shifting which guarantee precise and effective shifting no matter the conditions or circumstances,” say Campagnolo. “Shifting even under heavy load is no problem for the Chorus EPS transmission and mud, grime and debris have met their match against such powerful motors. With an IP67 waterproof rating on the entire system rain gear is only necessary for the cyclist, not his groupset.”

The power comes from an EPS V2 battery that sits internally within the bike frame. Campag say this keeps it safe from impact and contamination as well as improving the looks of your bike.

The two mechs look very similar to (although not exactly the same as) the existing Athena versions. We don’t have weights or prices of any of the EPS components yet, nor details on availability.

We showed you Campagnolo’s new Super Record, Record and Chorus mechanical groupsets last week, including the redesigned chainsets with 4-arm spiders. With unequal gaps between the arms, the largest gap being opposite the crankarm, they look vaguely similar to newer designs from Shimano. Like Shimano, Campag have gone to one bolt circle diameter for all sizes chainrings.

“Gone are the days of having a dedicated bolt pattern for standard chainrings and another for compact rings and no longer will changing from traditional to compact, or vice versa, translate into the obligatory purchase of a completely new chainset,” say Campagnolo.

“The new bolt pattern allows for all three chainring standards – 53/39, 52/36 and 50/34 – to be built upon the same crankset. Changing between compact and standard is now as easy as changing eight bolts and two chainrings.”

Campag say that the new Chorus chainset is more rigid that before.

“The new design incorporates an eight bolt pattern with a spider arm design that not only holds the chainring in place by way of the bolt but also supports the chainring and in doing so, increases system rigidity,” say Campagnolo.

“In addition to completely redesigning the spider, Campagnolo engineers dedicated a great deal of energy towards a completely new crankarm that is a great deal stiffer than previous versions. Add this new highly rigid crankarm to the new four-arm spider design and you have a complete crankset that not only excels at transferring power more than any previous version but one that is also more versatile with respect to gearing.”

Campag intend to continue with mechanical versions of each of their groupsets rather than forcing riders to use an electronic system.

“The goal of Campagnolo is not to decide for a given athlete if he or she should choose mechanical or electronic, nor does it intend to take a stance in the mechanic vs electronic debate,” says Campag.