Like it or not, disc brakes on road bikes aren't just happening, they're here right now and available in huge numbers for 2015. Up top is a huge gallery of some of the latest bikes from Eurobike, the world's biggest bike show, but we've picked a selection to give an idea of the different choices currently available.

The majority are carbon fibre endurance bikes, but there are some aero road bikes and even steel and aluminium options too. That most manufacturers are using their endurance and sportive models for introducing a disc road bike is down to several reasons. One is that these bikes are ridden by cyclists who don't need to worry about adhering to the UCI's rules for professional road racing, and that second has to do with chainstay length.

The space between the rear dropouts has to be wider to accommodate the disc rotor. On a frame with short chainstays, chain line issues can occur. With the longer chainstays of an endurance bike there isn't a problem, but a race bike with short stays the chain line can impact shifting performance in certain gears. Shimano actually recommends a minimum 415mm chainstay length. A typical race bike has chainstays closer to 400m in length - a Cannondale SuperSix Evo  for example has 405mm chainstays. 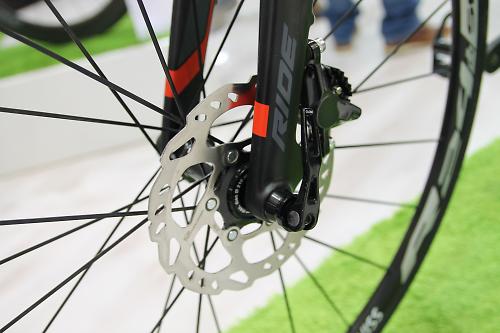 The majority of the bikes we saw were running Shimano's hydraulic disc brakes, which is perhaps not really a surprise given the impact of SRAM's long-running disc brake recall which has been in the news this year. We do expect to see plenty of SRAM-equipped models in 2015, quite a few manufacturers are offering them, but most simply didn't have them on their stands.

On the rotor size debate, most bikes were sporting 140mm rotors front and rear, largely because that's what Shimano recommend. We've had some interesting chats with people and there are some saying that 140mm simply isn't large enough to dissipate the heat effectively, even with Shimano's finned Ice-Tech rotors, and that 160mm is a better choice. We'll have to see how this debate plays out. 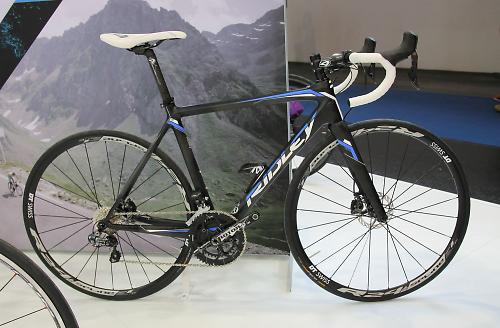 Belgian manufacturer Ridley have launched the new Fenix Disc and Jo got to ride it at the demo day earlier this week, and has passed his first ride impressions on it, which you can read here. Ridley have followed the lead set by most other manufacturers and used their endurance road bike platform, a bike built for distance, comfort and cobbles, for their first disc offering. 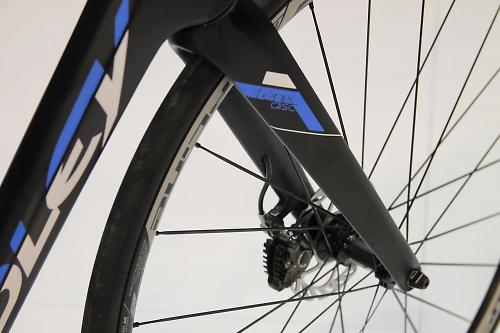 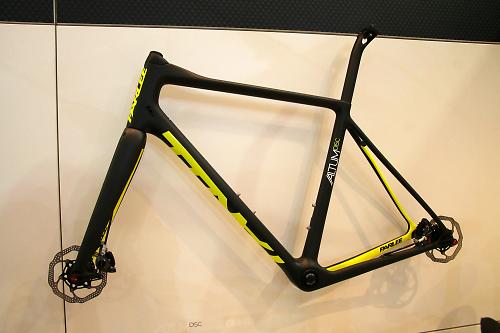 Parlee lifted the lid on their all-new range of Altum road bikes at Eurobike. This new range of frames replaces the Z5 and will be available in three versions, including a disc model. Unfortunately Parlee didn't quite have time to get the frame built into a complete bike for the show so we'll have to make do with this frameset hanging off the display stand. 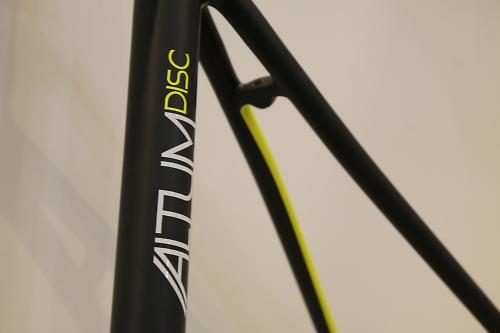 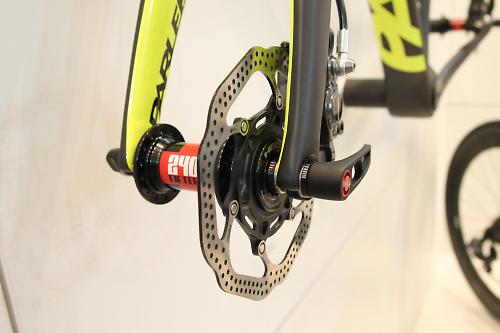 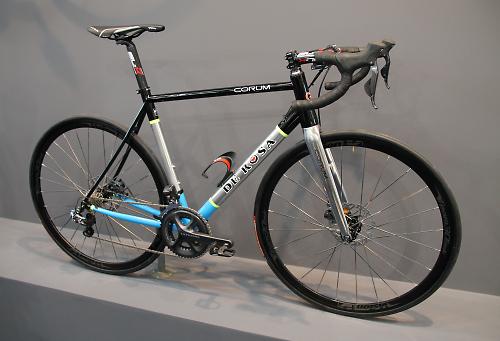 Another really interesting bike from the Italian company, this time oversized steel with disc brakes. We didn't see many steel bikes with discs at the show, most were of the carbon variety, so it's good to see a bit of variety. 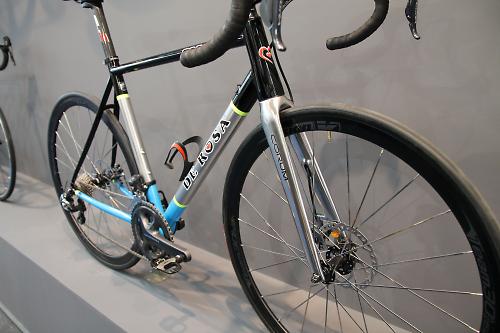 De Rosa’s Corum is part of the Italian company’s ‘Black Label’ bespoke range of hand-built frames, each can be made to measure and completely customised. 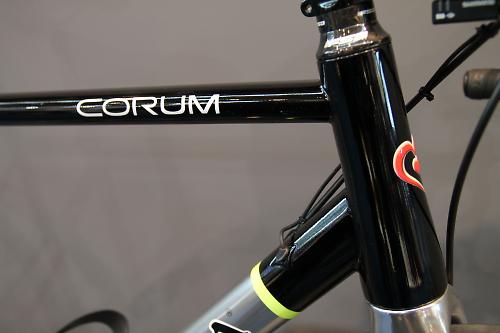 The frame is made from an oversize TIG welded 18MCDV6 tube set with a carbon fibre tapered fork and a 86mm bottom bracket. The frame will take a mechanical or hydraulic disc brake set. It's using regular quick releases and is built up here with an Ultegra Di2 groupset with mechanical disc brakes. 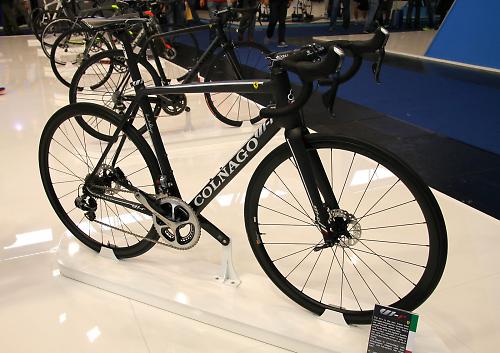 Colnago showed the C60 Disc but more interesting is the V1-r Disc. You see, most disc road bikes we've seen have been endurance bikes (longer wheelbases, relaxed angles) with disc brakes, but the V1-r is a race-ready aero race bike, and there aren't that many aero road bikes with disc brakes on the market at the moment. We got the full lowdown on the new bike yesterday, which you can read here. 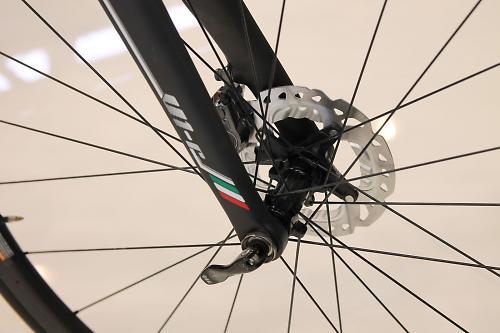 Like the Focus, the new V1-r uses a thru-axle fork, but pairs that with a regular quick release rear end. We're going to get some more info on the HexLock thru-axle used on the V1-r when we chat to Colnago today. 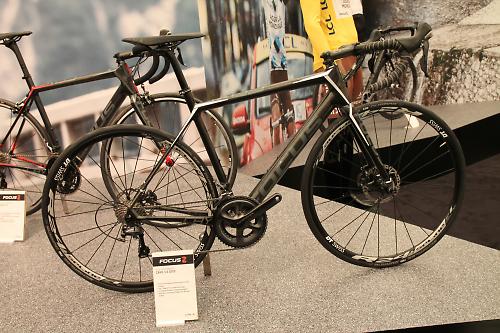 Here's the new Focus Cayo Disc. Mat was at the launch of this bike so you can get the full skinny on it there. Focus reckon it's the lightest disc road frame currently available with a sub-900g frame weight, and a 380g fork. It uses their own thru-axle standard at both ends. 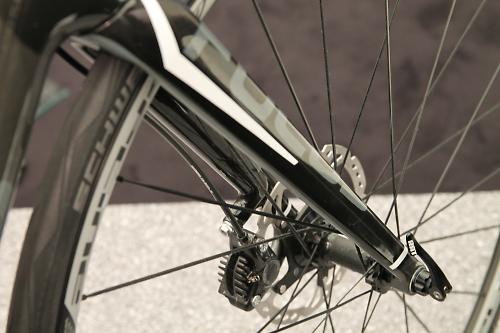 Focus have devleoped their own Rapid Axle Technology (RAT) thru-axle system which is insanely easy to use - I shot a short video showing how easy it is to operate, which I'll feature in a standalone article in the coming days. The video is just six seconds long. That's how easy it is to use. You simply open the lever, rotate 90 degrees, and slide it out.

They've used a 15mm axle because they found they could manufacturer a fork with a single weave of carbon fibre looping around the closed dropout, which apparently wouldn't have been possible if they had used a smaller diameter axle. 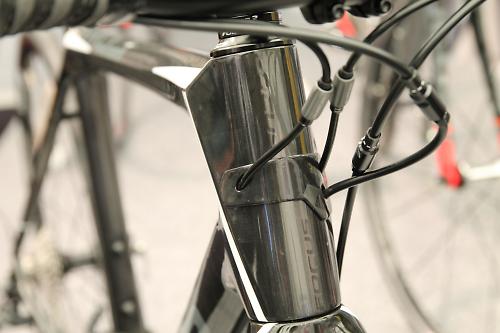 The head tube has been beefed up with some considerable width where it tapers into the top tube, and all the cables and brake hoses are routed through the small plate on the front. 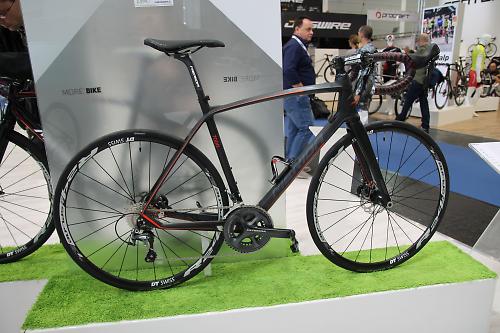 Merida first showed a prototype disc-equipped road bike last year but here is the final production model. There'll be several models, this is the Disc 7000 with a Shimano Ultegra group set with 685 hydraulic disc brakes and DT Swiss R24 Spline wheels with 25mm Continental Grand Sport Race tyres. They claim it weighs 7.6kg which is about on the money for a current carbon framed disc bike. 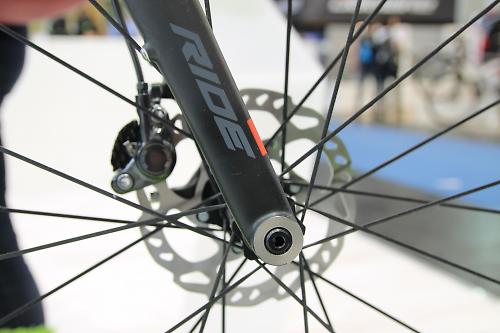 Like the majority of manufacturers, Merida have used their endurance Ride model as the platform for their foray into disc brakes. That’s largely because these bikes aren’t raced by professional cycling teams that have to adhere to UCI rules, and also because most generally have longer chainstays  - for a longer wheelbase - that doesn’t provide the chain line issues that can occur with short chainstays.

Merida have also decided that thru-axles are the way forward, but like Colnago’s V1-r, they’ve only used it on the front. It’s a regular quick release rear axle. The prototype they showed last year had a conventional quick release axle so they've clearly changed their mind along the way, and developed this new fork with a 15mm thru-axle. 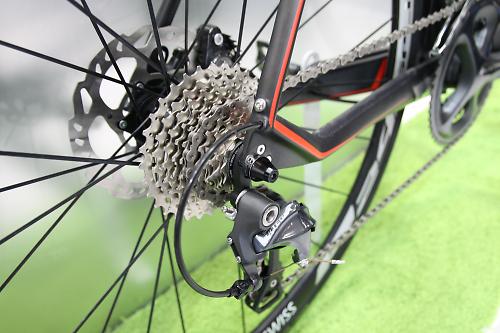 Worth mentioning is the fact Merida have given the frame discrete mudguard mounts, making it a great option for British conditions as a winter trainer or daily commuter. 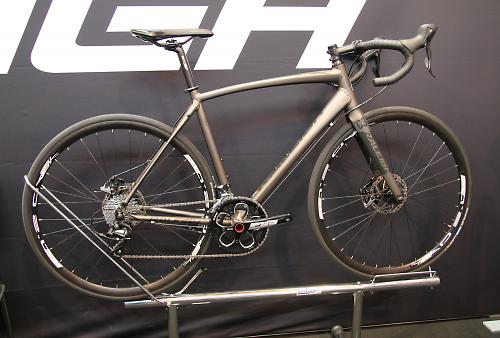 Raleigh's Revenion Disc uses an aluminium frame with the same geo as the regular Revenio, but adds disc brakes. They've opted for traditional quick release axles and unlike the majority of the bikes we've seen, they've placed the rear disc caliper on the outside of the seatstay. There'll be a range of bikes including this model with TRP Spyre mechanical discs. 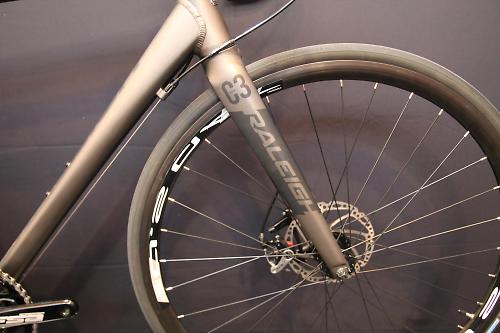 The Revenio bikes have a more relaxed geometry than standard road bikes so you get a fairly upright ride position. The on-trend 25mm tyres used across the range are designed to provide a bit more comfort and reduced rolling resistance. 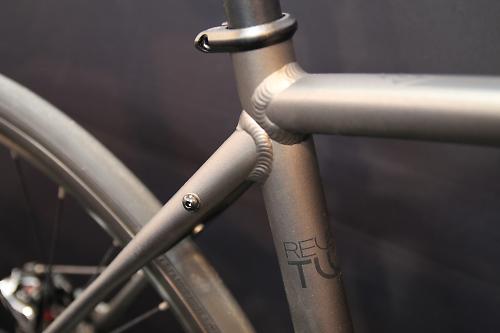 Taps into the versatily that we like on road bikes, with rack mounts. 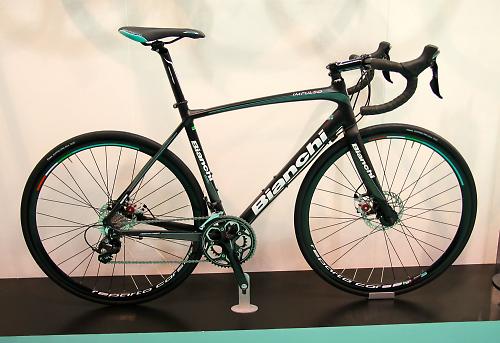 A lot of the disc-equipped road bikes we've seen feature carbon fibre frames, but there are several aluminium, and even steel, frame options for those that don't want, or can't afford, a carbon model. This is Bianchi's new Impulso Disc and it looks really good. It uses the same C2C geometry as found on the Infinito CV so the ride should be good. 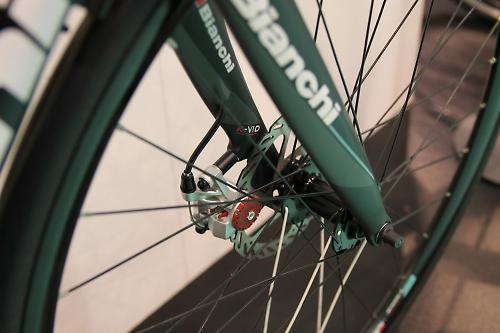 There's no hydraulic disc brakes though, instead they're going with Avid's BB7 mechanical discs. 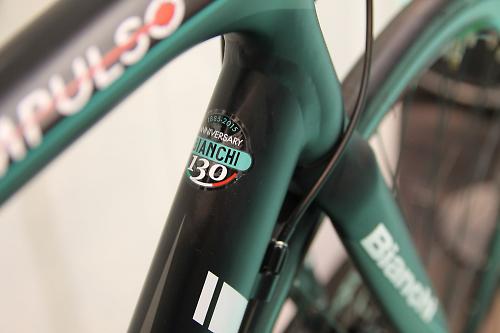 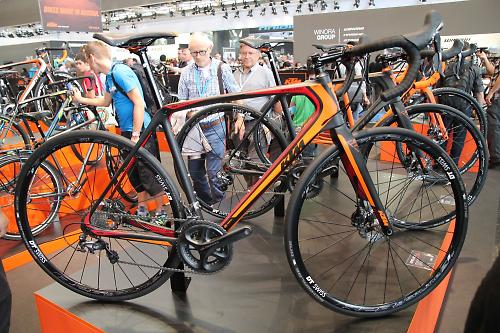 KTM do disc brakes on road bikes as well, giving their Revelator model the disc treatment for 2015. They're using a 15mm front axle and also borrowed directly from the mountain bike world is the 142mm wide rear end with a 12mm axle. 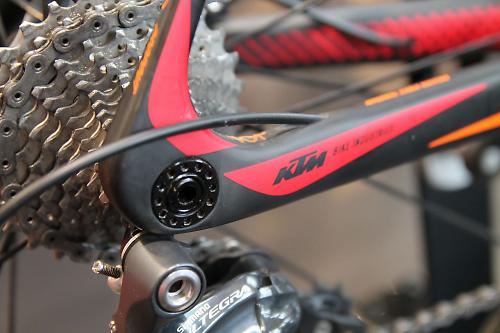 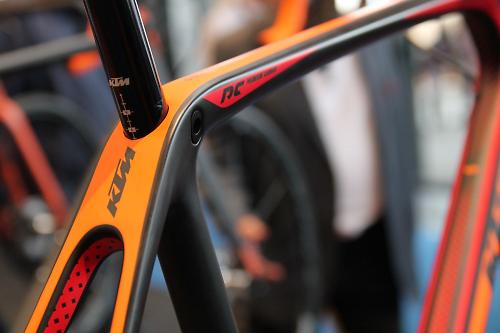 It's a pretty smart looking bike it has to be said, is available in a range of colour options and this integrated seatclamp is a nice detail.

The brand new Krypton XRoad from Canadian manufacturer Argon 18 is their new road disc offering, but they've pitched it as far more than just a road bike, and describe it as being ready to tackle any terrain. So think 'gravel' bikes and that sort of influence, which means big tyre clearance and the sort of geometry that should make it stable when handling over a bit of rough stuff. 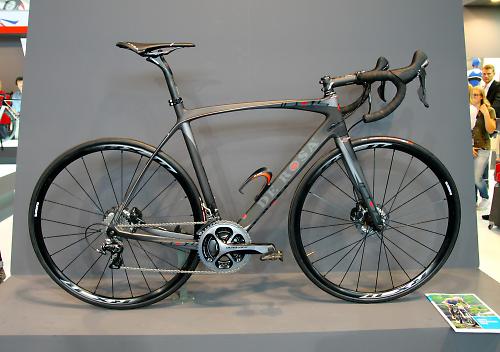 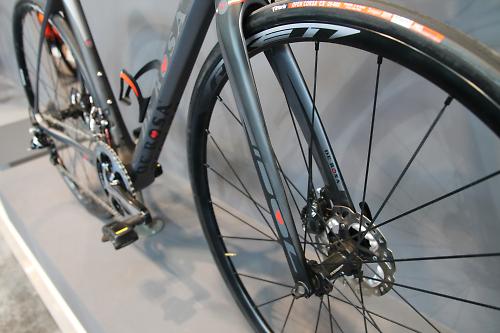 We'll be updating this article with a lot more disc-equipped road bikes so be sure to tune back in for more.