Earlier this month Cervélo unveiled their brand new £1,999 R2 with a Shimano 105 11-speed groupset and that word "affordable" in close attendance; and at the Eurobike Demo Day we got the chance to put it through its paces. While not enough miles to form a solid evaluation, the new R2 did make a good first impression with its handling and performance. 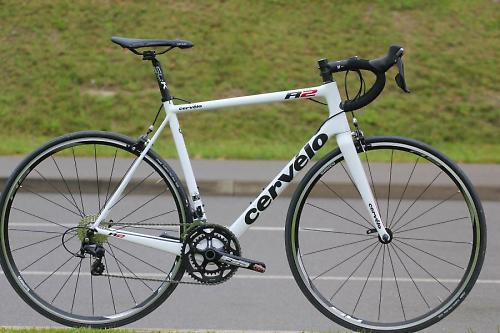 The R2 is only being offered as a complete bike in this single white paint job with a Shimano 105 11-speed groupset and FSA Gossamer BBright compact 50/34 chain set and matching brake calipers. Cervélo continue their close partnership with Italian company 3T and spec 3T Ergonova handlebars and ARX stem. Seatpost is an FSA SLK 27.2mm and saddle is a Selle Royal Seta. The wheels are Shimano RS010 with Vittoria Rubino Pro 23mm tyres.

What you need to know about the new R2 is that it’s the exactly same frame as the new R3 that was introduced last year, with the latest generation Squoval tubing and future-proofed cable routing. And when we say the same frame we mean exactly the same frame, it comes out of the same mould with the same carbon fibre layup. 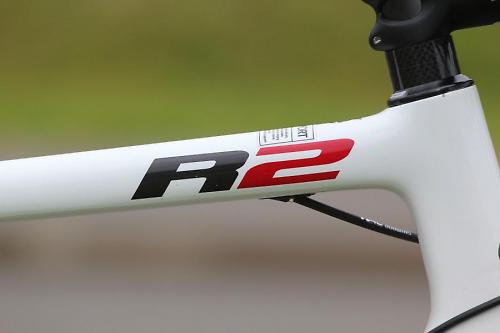 The R2 now completes Cervelo’s recently overhauled range of bikes. They now have a 2, 3 and 5 model of the R-, S- and P-series bikes, expanding their offering to lower price points and all wrapped up with fresh new paint jobs and graphics. The R2 bikes are only offered as complete bikes but using the same frame as the 3 (which is offered in more expensive builds as well as frame only) and more affordable components.

So are there any other differences with the R3 apart from build kit and the number on the top tube? Yes there is one and it's quite an intriguing one too (for a given vallue of intrigue - ed) the R2 has a different carbon fork, one with more tyre clearance, which does make us wonder whether Cervelo are working on a new frame to take new fashionably wider tyres… and adding 2 and 2 together and getting 22, maybe a disc brake version too. Anyway we'll get back to the fork in a minute. 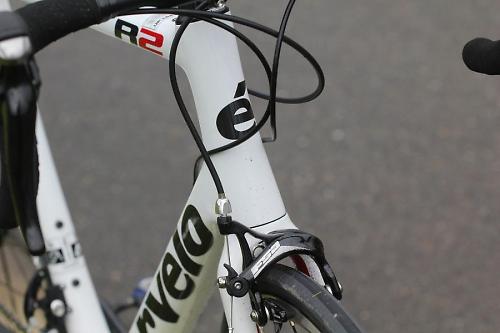 The latest generation Squoval tubing on the R2 has trickled down from the really expensive RCA and R5 models right at the top of the Canadian company’s range. The rounded square tubes are claimed by Cervélo to provide a 7.4 watt saving compared to the previous iteration of the Squoval tubing, as well as being stiffer, by as much as 24% at the head tube than the old Squoval. Obviously both are better than the common or garden tube profiles found on other bikes - we're guessing Cervelo would say. 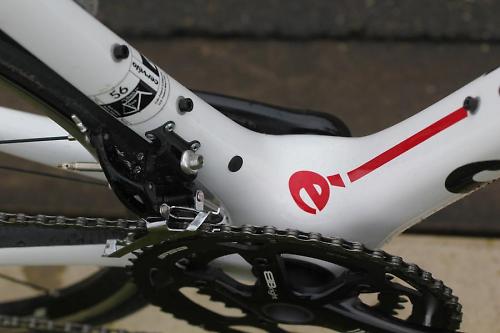 Frame weight is a claimed sub-1kg for a size 56cm. All cables are internally routed and the routing has been future-proofed so you can easily upgrade to an electronic groupset or hydraulic rim brakes even.

As mentioned above the R2 gets a brand new fork that comes out of the same mould as the R3 Mud fork used by the Garmin-Sharp squad in the Classics races like Paris-Roubaix and Tour of Flanders. Apart from a very limited number of R3 Mud bikes that Cervélo had to sell to satisfy the UCI’s rules, this is the first production bike to feature this fork. 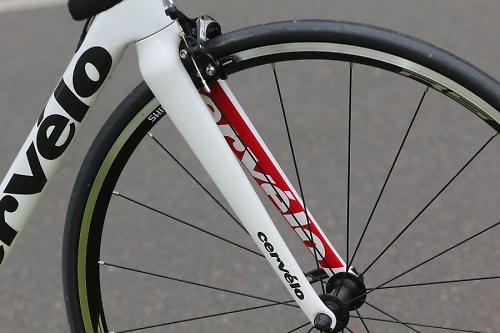 It offers massive tyre clearance, with easily space for a 28mm tyre, but we reckon you could probably go a bit wider, the only limiting factor isn’t the fork, but the brake caliper. The fork is as wide as the brake calipers. 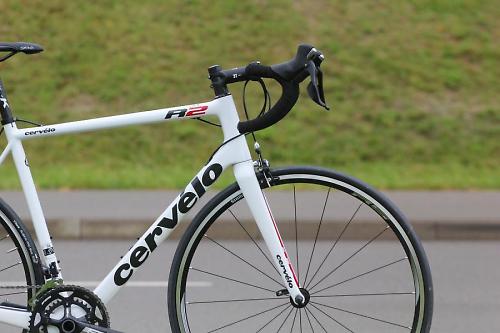 Unfortunately before you get any ideas of fitting a pair of 27 or 28mm tyres to the R2, the frame only accepts up to 25mm tyres. That’s a bit of a shame. With the popularity of wider tyres and bikes capable of straying away from the smooth tarmac, we reckon a frame with similar clearance to the fork would be a good addition to the Cervélo range.

The ride: Fast and smooth

The new fork keeps the classic R3 geometry intact, and works well on the frame without a noticeable drop in stiffness or handling response. Though it’s essentially the same, Cervélo says it has upgraded it to carbon dropouts from the aluminium dropouts on the forks used by the professionals. 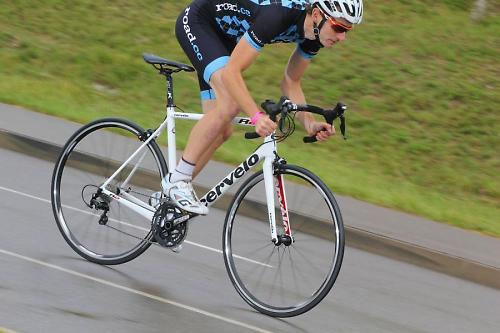 If you’ve ever ridden an R3, you’ll find the ride quality of the R2 very familiar. The R3 is a modern classic of a race bike that has numerous race victories to its name, including the Tour de France back in 2008.

I felt right at home on the bike. It manages to offer that typical Cervélo performance, a lovely blend of stiffness when you need it and smoothness when you’re pointing it over rough tarmac and poorly maintained roads. Those classic skinny seat stays do a fine job of metering out vibrations. 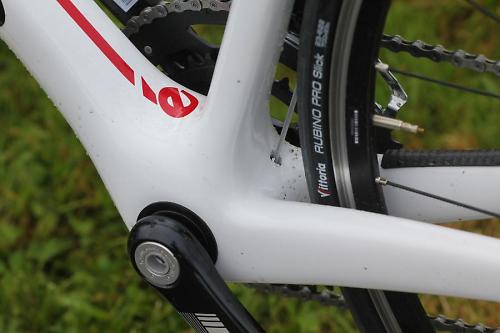 The front-end feels direct, steering is well weighted and it flows through corners with confidence. It’s really quite an easy bike to ride, there are no quirks or suprises to its handling, it just does the job very well.

It’s reassuringly fast and despite its obvious weight it doesn’t feel tardy when sprinting out of the saddle or putting in a hard acceleration. The area around the bottom bracket feels noticeably stiff when pushing hard on the pedals. 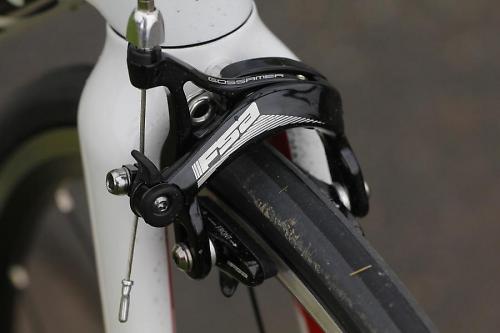 The components all do their respective jobs well. The FSA callipers don’t quite have the same firmness as a Shimano unit, but they comfortably bring the R2 to a safe stop. The shifting performance is good and the compact gearing provides a generous spread of ratios. The 3T handlebars are really nicely shaped with a long drop section that doesn’t stretch you out too much.

Unfortunately my time on the R2 was far too brief before I had to give it back after an hour, but despite the brevity of the ride, it is clear the R2 doesn’t lose any of the fabled performance and fine handling of the R3 despite the concessions made to hit the £1,999 price. 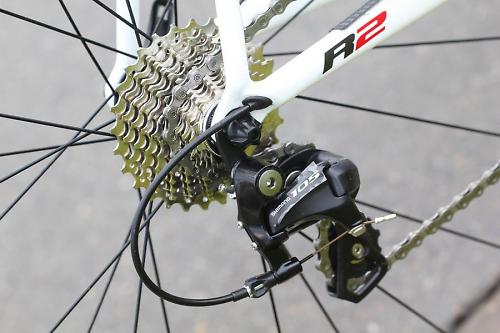 The carbon road bike market is certainly a crowded one, but here’s a option for your shortlist that has genuine race pedigree with victories in some of the biggest races to its name. That racing heritage shines through in the way the bike performs. And it would certainly make a great race bike with fantastic upgrade potential, and even a very fine sportive bike.