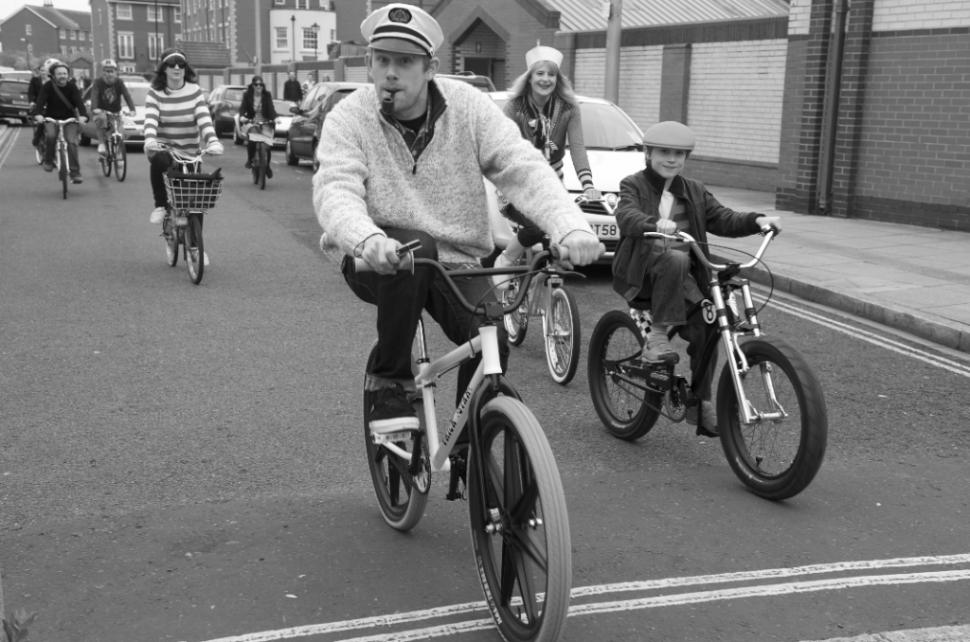 Portsmouth cycle campaigners are calling on the city’s council to build properly engineered cycle lanes after the rate of cycling injuries increased nine percent between 2012 and 2013, making Portsmouth the worst English city for cycling casualties outside of London. However the councillor in charge of transport in the city has suggested a crackdown on pavement cycling and red light jumping as a solution to the problem.

Over the last year Portsmouth Cycle Forum (PCF) has been working with the PCC’s Road Safety and Active Travel Officers, to understand why Portsmouth’s roads are so unsafe for cyclists.

PCF found that all but two of the city’s 21 worst cycling casualty hotspots were at junctions on A roads, with the A2047 being by far the worst. Seven hotspots were at roundabouts  – where PCF says the the designs fell well short of the DfT Recommendations, made back in 2008.

The other high cyclist casualty junctions were all T-junctions and crossroads, most without traffic lights, says PCF. The campaigners found that most of these junctions were with linking roads used as rat-runs. With high-sided vehicles creating blind spots, this is a dangerous recipe for accidents to vulnerable road users, they added.

Jon Spencer, chairman of Portsmouth Cycle Forum, said: “Urgent action is needed to dramatically reduce these casualty figures. The people of Portsmouth deserve to feel safe when they choose to cycle.”

“Portsmouth is an island with limited road space. In terms of trying to change the priority at roundabouts and junctions, sometimes it’s not practical in Portsmouth.

“We are trying to work with the Portsmouth Cycle Forum and other cyclists in the city to see what we can do.

“I will also be talking to the police and seeing if they can run a campaign for people who cycle through red lights and cycle on the pavements.

“It’s also about educating those who don’t comply with the rules of the road.”

Council leader Donna Jones said: “The safety of cyclists on Portsmouth’s roads is of paramount importance. That’s why I am already working with the Portsmouth Cycle Forum to try and improve road safety. I will be asking the traffic officers to look at the most recent statistics that have been released and come back to me with some recommendations.”

Portsmouth Cycle Forum already has recommendations, at least as far as knowing what it thinks won’t work to protect the city’s cyclists.

Tom Hart, committee member of Portsmouth Cycle Forum said: “Proper provision for cyclists must be made on all of Portsmouth’s major cycling routes – and that means properly engineered cycle lanes. A little paint here and there will not bring our accident rate down to acceptable levels.“

Responding to the concerns raised by the Portsmouth Cycle Forum Portsmouth City Council road safety officer Ollie Willcocks sought to add some context to the debate: "The council is very aware that we still have work to do on safety for cyclists. However, the statistics being quoted, from the Department for Transport, don't take into account how many cyclists there are in each area. Portsmouth has a very high number of cyclists, so unfortunately, it would be natural to expect more accidents.

"In Portsmouth 4.7% of commuting traffic is by bike and we have more than 7,000 commuting cyclists. This is the highest level in the south east.

"Between 2012  and 2015 the council will have spent £2.3 million on projects to encourage cycling and make it safer. We have narrow streets and a very densely populated city, so sometimes our options are limited. But work is being done all the time, including training children and educating cyclists and drivers.  We're expecting a new Cycle Delivery Plan of government funding for cycle improvements, which we hope will provide more resources for what we want to do."

"It might be worth noting that our worst accident site is the junction of Anglesea Road and Park Road, where a major cause of accidents here is people on bikes jumping red lights."