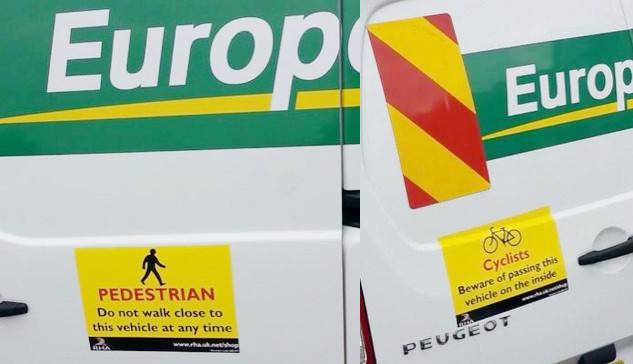 Car hire company Europcar has come under fire for fixing stickers on some vehicles warning pedestrians and cyclists to keep clear.

A storm of criticism followed as people asked what the stickers were intended to achieve and a seemingly rather bemused social media person at Europcar failed to take the issue seriously enough. 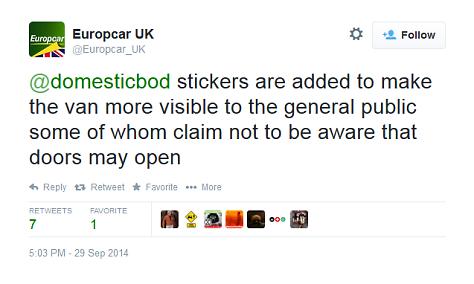 As you can imagine, that really didn't help. Lizzie Reather of Leeds Cycling Campaign responded and got this reply:

Hi @LizzieReather the response was meant to be light-hearted as clearly the van is visible on its own. Stickers are meant to help not enrage

Other tweeters pointed out that the stickers can be considered victim-blaming; that it's legally the responsibility of the person opening the door to look out for other road users such as pedestrians and cyclists; and that the sticker alerting pedestrians was on a sliding door anyway, so there was no danger to warn about.

Europcar sponsors the French cycling team of the same name, which might account for some of the outrage, and eventually Europcar played the sponsored team card:

They also tried one of those 'sorry not sorry' apologies:

The stickers in question are not original to Europcar. They are sold by the Road Haulage Association and like Transport for London's notorious 'Stay Back' stickers appear to be intended to warn against the blind spot issues of large vehicles.

TfL's stickers are now being replaced after representations from cycling campaign groups.

Rather than selling stickers, the other major lorry lobby organisation, the Freight Transport Association, sells educational cards with bullet-point reminders to drivers of how they should behave around cyclists. Perhaps Europcar should get a few of those and give them to customers.

Update: Europcar says it didn't put the stickers on the van

@Europcar_UK do not apply these warning stickers to vehicles; these are rental vehicles and any stickers are removed when they are returned.

and shortly afterwards, this

(Hat-tip to Bez for grabbing all those tweets.)