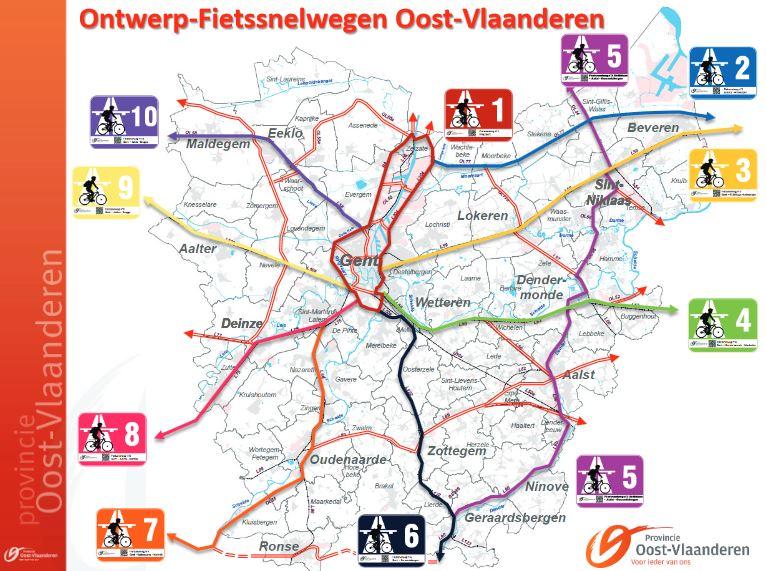 Routes, many already in place, aimed at encouraging people to make 5-20km journey's by bike ...
by Simon_MacMichael

The Belgian province of East Flanders says it is prioritising the development of an extensive network of ‘cycle highways’ that will link towns and cities across the region to encourage people to switch to two wheels by providing safe and quick routes to shops, schools and workplaces.

Using a mixture of existing cycle routes, some of which will be upgraded, plus new ones to provide links where those are currently missing, the highways will be at least three metres wide with a design speed of 30 kilometres an hour, and are aimed at people undertaking trips of between 5 and 20 kilometres.

They will have uniform signage and lighting where appropriate, and the intention is to make them as straight and flat and free from conflict with other road users wherever possible, including secure junctions, says the government of the province, which is home to just under 1.5 million people.

Peter Hertog, responsible for mobility in the province’s government, the Deputatie, said: “At the moment many cyclists experience their routes to work, school, the supermarket, the station or even to visit friends as unsafe, uncomfortable, or with too many detours.

"We want to change that with the construction of this bike highways," he continued, adding that the overarching aim is to increase the functionality of using bikes to get around.

"The vast majority of our daily trips are perfect for bicycles,” he said.  “Electric bicycles mean even more sites can be reached within a shorter time.

“On a bicycle highway, it is possible to travel safely and comfortably from say Deinze, Lokeren or Wetteren to Ghent in half an hour."

Much of the network will comprise parts of the province’s current long-distance trails network, which has 1,200 kilometres of routes alongside railways, rivers and canals as well as on disused railway lines and tramway beds.

The cycle highway network, which will also join up with similar routes in neighbouring regions and provinces, will be half as long at 600 kilometres, anid the province says that 43 per cent of it is already in place to a high or very high standard.

A further 26 per cent is described as “rideable,” comprising routes shared with other traffic, described as “often the only solution,” particularly in cities, although options such as “bicycle streets” as part of more extensive “bicycle corridors” are being explored in those places.

That leaves just under a third of the network, around 200 kilometres, that needs to be put in place, and the province says it will address those on a route by route basis.

It is anticipated that four of the planned ten routes will be fully in place by 2018, running from Ghent to Antwerp (the capital of the neighbouring province to the north east), Ghent to Deinze-Zulte and Ghent to Wetteren, plus an east-west route that passes through Dendermonde.

The announcement of the project is, according to the province, the first step in a process that includes consultation, already under way, with parties including town and city councils, the Flemish government and those of neighbouring provinces and regions, rail network owner Infrabel, as well as local residents and businesses.

It’s unclear how much the project will cost. The province says that its multi-year budget sets aside €2.5 million for it, which it says will allow 20 kilometres to be built each year, including bridges and tunnels where necessary.

For comparison, the reported cost of the planned Leeds to Bradford CityConnect scheme in West Yorkshire, around 22.5 kilometres in length, is £21.2 million, financed by a governmental Cycle City Ambition grant and local match funding.