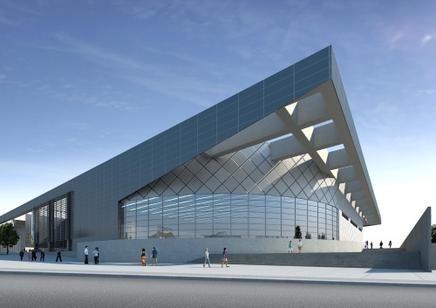 Junior world championships will arrive in 2013
by Tom Henry

The first major event to be held at the Sir Chris Hoy Velodrome in Glasgow – currently under construction for the 2014 Commonwealth Games – has been announced.

EventScotland said the velodrome will host the Junior Track World Championships in 2013 following a successful bid to the UCI. Approximately 220 riders from 60 countries are expected for the event.

"As the first event confirmed for the Sir Chris Hoy Velodrome, it will introduce Scotland's newest sports facility to the world.

"The Sir Chris Hoy Velodrome will be a unique facility and among the top venues for track cycling in Europe.

"We anticipate that this will be the first of many track cycling events won for Scotland in the years leading up to and beyond the 2014 Commonwealth Games in Glasgow."

The velodrome, plus an indoor sports arena, will be constructed on a ten and a half acre site close to Celtic Park in the city’s east end, which will also be close to the Commonwealth Games Athletes’ Village.

The indoor arena will have 5,000 spectator seats for sporting competitions, while the velodrome will have a permanent capacity for 2,000 seated and 500 standing spectators viewing the 250-metre cycle track, which will be increased to 4000 seats at Games time for the track cycling events.