Rapha has launched the Pro Team Softshell jacket, a windproof and highly water resistant addition to its growing Pro Team range, which draws on their partnership with Team Sky. Rapha describes the new addition as the “race-bred evolution of the Rapha Classic Softshell jacket.” Like the Classic Softshell, this new jacket uses a three-layer fabric with a polyurethane membrane sandwiched between the inner and outer layer. 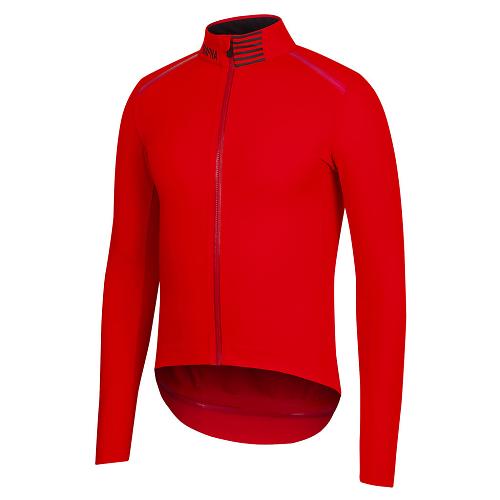 The fabric is claimed to be windproof and highly water resistant - they don’t claim it’s waterproof, but it does have taped seams throughout. Rather than use a DWR (durable water repellent treatment) on the outer layer of the jacket, as is the typical method, Rapha worked with a Swiss textile company called HeiQ who developed a process that “infuses the fabric with the treatment, instead of just coating it.” Rapha claims a high level of breathability with this jacket, enough to be comfortable for six-hour rides, but have taken the precaution of laser cutting ventilation holes in the top of the side panel, just under the arms.

The fit is, as we found with the Pro Team jacket last year, is obviously race inspired and designed to be a snug fit. It’s a jacket designed for racing snakes, for racing or training in.  Rapha reckons the Softshell fabric works best in close contact with the skin, so a close fit supports this, and also suggesting it can be worn over just a short sleeve base layer or over a jersey when it’s warm enough, but can be layered up appropriately.

The jacket has a centrally aligned full-length zipper with a tall collar, three rear pockets and a dramatically dropped tail. Interestingly the middle pocket, the one that usually gets all the spray from the rear wheel, features a shiny wipe clean panel. There are the Pro Team standard stripes on the elbows, right side pocket and on the front of the collar.

The Pro Team Softshell jacket is available in two colours, red or grey, and costs £200. Take a closer look at www.rapha.cc/gb/en/shop/pro-team-softshell-jacket/product/PST01

Pinarello’s new-this-year F8 aero road bike might not have won a Grand Tour this seasons, but it’s ended the year by scooping a London Design Award in the Product Design, Sport and Active Life category. Pinarello CEO Fausto Pinarello said: “This award is confirmation that the Dogma F8 is the best bike in the world. We always look for ways to improve our bikes and the ability to bring new technology to our award-winning Dogma range using Jaguar’s cutting-edge aerodynamics capability and Team Sky’s world renowned race expertise was something very exciting for Pinarello.”

The new F8 was a collaboration between Pinarello and Team Sky’s sponsor Jaguar. It represented the first aero road bike for the Italian company and a big step forward from the previous Dogma, but not only was it more aero, but it was lighter too. Team Principal Sir Dave Brailsford added: "This collaboration included the world’s best bike manufacturer, a world leading automotive brand and the world’s most innovative cycling team to produce something stunning. A performance gain of above 6% in one year’s development is extremely impressive. I’ve never seen, or been involved in anything like this.”

Mavic are holding a special 125th anniversary auction to celebrate their 125-years of producing cycle components, with all proceeds from the sale going to the  Davis Phinney Foundation and their efforts to offer programs that provide the information, tools and inspiration that can be used to live well with Parkinson’s today. They’re putting up a Seven Axiom SL frameset with a Shimano Ultegra groupset and Mavic’s new Ksyrium 125th Anniversary wheel and tyre system (Dave covered the launch for this new product range) making it a very rare and unique bike.  It's quite a belter of a bike, you must surely agree? As well as the special build, the whole bike has been finished with a bespoke paint job making the most of the French company’s trademark yellow brand colour. The auction is running on Ebay and there are currently nine days remaining, with the current bid at the time of writing just $1,225 - we expect that to rise quite a bit as the auction nears its end. Here’s the full specification for the Seven Axiom SL up for auction - it’s a 54cm only:

Increasingly cyclists are using GPS-enabled smartphones to track cycling workouts and navigation, and if you want to mount the phone to your handlebars or stem, there are a few options. A new one is this Indigo mount, which is currently on Kickstarter seeking $4,000 of funding to go into production. What the Indigo mount does, quite cleverly, is to provide a the uni mount, which sticks to the back of your phone or phone case, and then plugs into any of the many Garmin compatible quarter-turn mounts, such as this lot of Garmin out-front mounts. 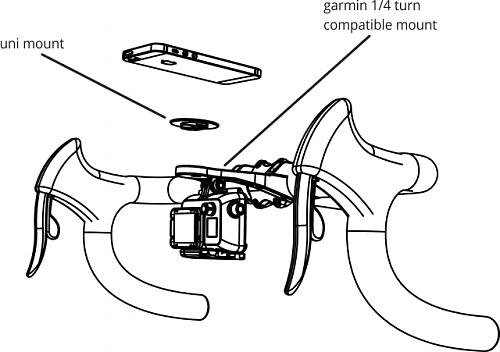 You can pledge your support with a mount costing just $18, though we’re not sure what the shipping costs from Australia would be? They’re hoping to go into production in February 2015. Check it out here. This beautiful looking book, Beyond the Finish Line, aims to take a novel view at the world of professional and amateur cycling with a showcase of some of the best cycling images from photographer Philipp Hympendahl, with sumptuous scenes from Champs-Elysées in Paris via the Northern Classics to amateurs heading for glory on local tracks and streets. The photography is partnered with short pieces of narrative. 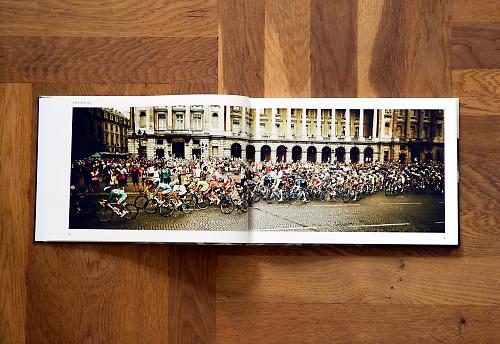 It’s currently available on Amazon costing £25  and you can find out more at their website www.edition-hympendahl.de/en/produkt/beyond-the-finish-line/

Canadian clothing company 7mesh have unveiled a limited number of Launch Edition jackets, the result of 18 months of designing, developing and testing, with the Launch Edition Revelation jacket the flagship item in the lineup. 7mesh say the jacket offers maximum protection for the worst conditions and is designed to work on the bike, but also be versatile for off the bike action. It’s made from Gore-Tex Pro fabric and features forearm and side vents, a removeable under-helmet hood, hand pockets and adjustable hem and cuffs. 7mesh claim the jacket weighs just 270g. Keeping track of your speed and cadence when cycling can be useful data to have, and this new Tacx sensor set uses ANT+ and Bluetooth so you can easily sync them with any compatible device, from a Garmin computer to a smartphone. 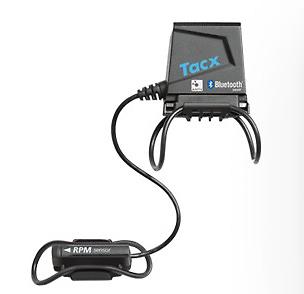 There’s a growing number of sensors that utilise both ANT+ and Bluetooth, the later opening up the many smartphone apps now geared towards cycling. Add the Tacx heart rate monitor strap recently launched, and you’ve got all the data you could ever want when you’re cycling.

The Tacx Speed and Cadence sensor costs € 49,90 and is available now, more at www.tacx.com/en/products/sensors/speed-cadence-sensor

This very stylish pair of prints has been commissioned exclusively for Vulpine by Edinburgh illustrator and printmaker Rebecca J Kaye. The prints can be bought separately but they two look better together we reckon, and you also get a £10 discount if you buy the pair. The artwork is printed on 160gsm A3 paper. More info at www.vulpine.cc

Endpoint make bicycles and accessories for exploring and adventure, with products built to last the life span of the rider, and this philosophy is distilled into the Coffee Grinder frameset. It’s made from True Temper Double-Butted steel tubing and hand-built in the US, and is designed as one bike to do-everything. There’s a lot of talk and buzz about road bikes with the versatility to tackle any sort of cycling you want to indulge yourself in.

Endpoint say this frame is good for “every century, commute, camping trip, gravel crusher, Gran Fondo, or just getting out there and seeing where the road ends. You might find yourself needing fewer bikes in the garage after riding this machine.” The Coffee Grinder centres around regular road geometry with a slightly higher, more relaxed position with short chainstays and space for 35mm tyres. There are three bottle cage mounts for the longer rides you might want to plan, and of course there are mudguard mounts. It’s available with a steel or carbon fibre fork, depending on your preference - their steel fork has a proprietary front rack and bag. The frame cost $1,350 and there’s currently an 8-12 lead time. Interested? Take a closer look at http://rideendpoint.com/collections/frontpage/products/coffee-grinder