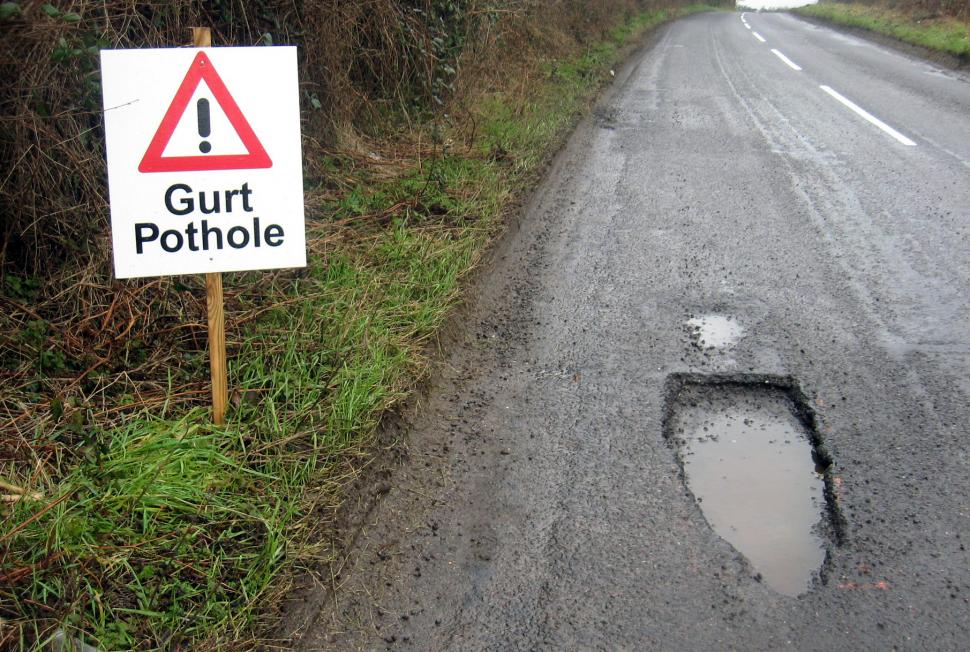 No consideration of cycling either, say campaigners as Government announces how money will be allocated
by John Stevenson

Cycle campaigners have welcomed the government's pledge to spend £6 billion on road maintenance and local road improvement but called on the Department for Transport (DfT) to make a similar commitment to creating cycling infrastructure.

Transport Secretary Patrick McLoughlin announced today how a total of almost £6 billion will be allocated to local authorities between 2015 and 2021 to fix potholes and improve local roads.

The money was originally announced in June 2013; the latest announcement details how the cash will be distributed.

Over £4.7 billion will be shared between 115 councils, while a further £575 million will be available through a new challenge fund to help repair and maintain local highway infrastructure such as junctions, bridges and street lighting.

An additional £578 million has been set aside for an incentive fund scheme which will start in 2016 to reward councils who demonstrate they are delivering value for money in carrying out cost effective improvements.

Patrick McLoughlin said: "Poorly maintained local roads, blighted by potholes, are a menace to all road users. It is vital we have good quality roads.

"The £6 billion funding I am announcing today will put an end to short term fixes and will mean we have committed £10 billion between 2010 and 2021."

Cycling charity CTC said it would like to see the DfT encouraging councils to think about whether road layouts could be made more cycle-friendly when resurfacing is carried out. This could be a very cost-effective way of delivering improved cycling conditions.

Paul Tuohy, CTC Chief Executive said: “It’s encouraging to see the Government employing a long term strategy on mending the surface of our roads, and I hope that they will now plan similarly for cycling.

“Potholes have long been the scourge of English roads – which is why we created our Fill that Hole app to report them. When fixing them it is important to prioritise local roads and streets, as these are most frequently used by pedestrians and cyclists.

“It is disappointing that the Government will not consider cycle-proofing planned maintenance as one of the criteria for their incentive fund. As we have seen with the success in Plymouth, planned road maintenance is a prime time also to put in good quality cycling infrastructure. By doing these two things together, both time and money savings can be made.”

Claire Francis, Sustrans head of policy, also warned that investment for cycling and walking must be included:

She said: "Fixing potholes and improving local roads will increase safety for all road users but this must include maintenance and repair of cycle routes and pavements.

"Fixing the roads without investing in cycling and walking will just create more traffic and increase congestion and harmful emissions."

Engineering and local government organisations expressed doubt that the announced funding would be enough to even arrest the deterioration of Britain's roads, never mind reverse it.

During the run-up to the Tour de France it emerged that North Yorkshire, which has the country's third-largest road network needed £322 million to repair the damage from recent freezing winters and neglect.

The councils of Yorkshire say they need a total of £1 billion to bring their roads back up to standard; they have been allocated a total of £442,365,000.

A spokesman for the Local Government Association (LGA), which represents councils said: "While helpful, this new money does not bridge the overall funding gap which is increasing year on year. There is still a very long way to go to bring the nation's roads up to scratch."

The LGA is also not impressed that over £1 billion will be allocated competitively,

The LGA said: "It would be more useful if the whole £6 billion was given to councils to get on with the important job of fixing roads, rather than £1 billion of it being tied up in Whitehall bureaucracy.

"Recent harsh winters and decades of underfunding by successive governments have created a national backlog of road repairs that would take £12 billion and a decade for councils to fix.

Nick Baveystock, director general of the Institution of Civil Engineers said the money would be a "welcome boost, if it survives a post general election spending review."

But he added: "Given the one-time road maintenance 'catch up' cost has been estimated at £12bn this year, a significant gap will remain in local authority revenue budgets."