Spotted for the first time at the Tour Down Under, some members of the Team Giant-Alpecin have been wearing a new Giant aero helmet. When it happens, it'll mark a move into the high performance helmet market for the bike manufacturer, and join the likes of Specialized and Trek in offering an aero helmet.

We don't really know much about it at this stage. It's clearly a very finished looking helmet, so we'd expect it to be not far off production. It has the typical smooth and rounded shape associated with an aero helmet, but this one features three large and two smaller front vents, suggesting they've aimed to combat the issue of overheating that can inflict aero helmets. Some manufacturers like Bell and Kask have sought to use adjustable flaps that can open or close air vents as needed to get around this overheating problem.

More news when we get it.

Velobici have released the new Van Vinden jersey which they reckon is ideal for cycling in all weathers. It uses a VB/Pro-Shell fabric which ticks all the boxes for weather protection, so it's waterproof and windproof. The fabric is a three-layer design with a flexible polyurethane membrane sandwiched in the middle. Micro-pores allow perspiration to escape yet keeps rain out, says the clothing company, with the outer layer treated to a DWR coating to ensure rain beads off the surface. 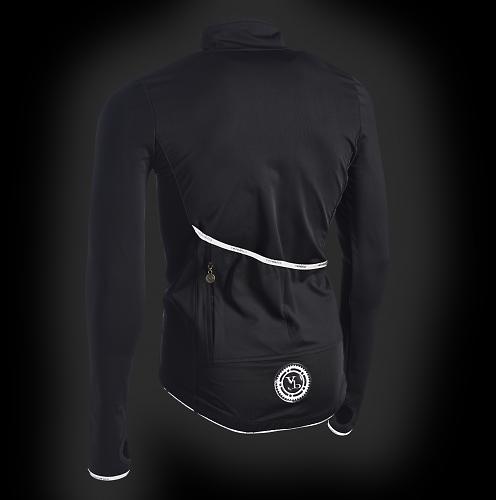 The jacket features five pockets, two of which are zipped and waterproof. There are reinforced thumb loops, a dropped tail, long cuffs and a silicone gripper tape around the waist band, and lots of reflective details. And looks very nice in the way that Velobici kit usually tends to. 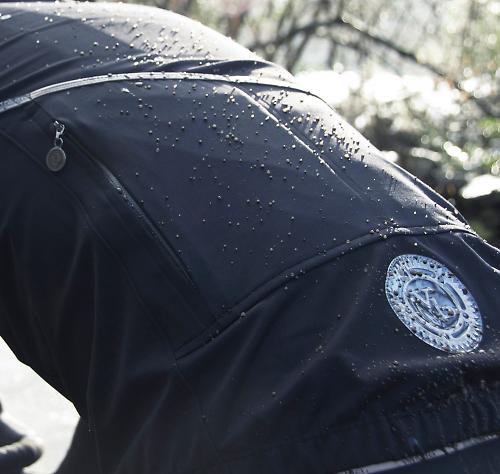 It’s made in the UK and available www.velobici.com, where it costs £195

Are 3D printed bikes soon to be a reality?

Every year it seems we’re getting a step closer to an actual 3D printed bicycle we can ride, and even buy. Here's another potential contender. Matt Clark believes his Innervision prototype, which offers a lightweight yet strong design, could be coming to market later this year, reports 3dprint.com. 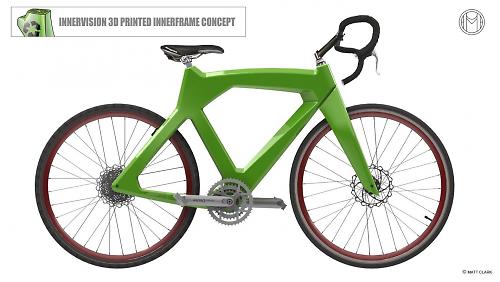 Clark aims to use a recycled fibreglass reinforced polypropylene and each bike will be “printed vertically in order to produce the Innerframe and outer surface simultaneously” says Clark. This apparently allows for a lighter weight construction compared to most solid-form 3D printed objects. 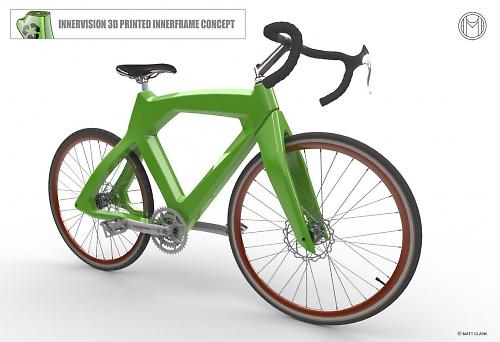 “My method utilises the technology to create a custom, structurally optimised core to provide strength and light weight,” he adds. The Innerframe features a spaceframe structure with internal moulded beams to increase the strength and also distribute weight. 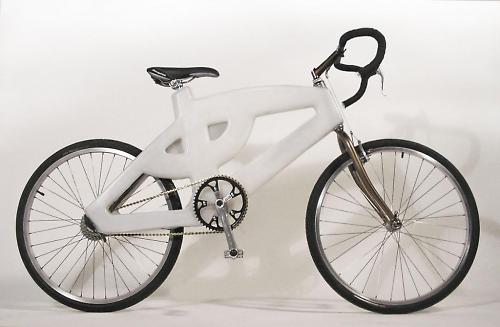 The prototype pictured above, which isn’t too easy on the eye, weighs a claimed 10.5lb, but Clark claims it could be much lighter. The technology and costs are still prohibitive, but even so Clark reckons he could be selling the bikes by the end of the year. More at http://3dprint.com/39584/innervision-bicycle-3d-printed/

Zipp have issued a recall for their 88 front hub, due to issues concerning spoke retention that might result in an ejection of all the wheel’s spokes.

There’s a full list of affected bikes here, so worth checking if you have an older Zipp wheelset. If your front hub is affected, SRAM advises you to immediately stop using it, and contact SRAM for a free replacement hub.

German company Schindelhauer Bikes create urban bikes with each model in the range utilising the Gates Carbon Drive. You could say they’re big fans of the belt drivetrain system. 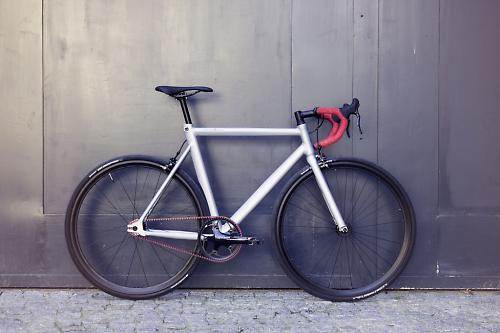 Their latest bike is sure to turn heads. The Viktor Red Race is a limited edition model, and it’ll be available from March with just 50 bikes available. It’s a track bike in spirit, with horizontal dropouts and a flipflop rear hub. 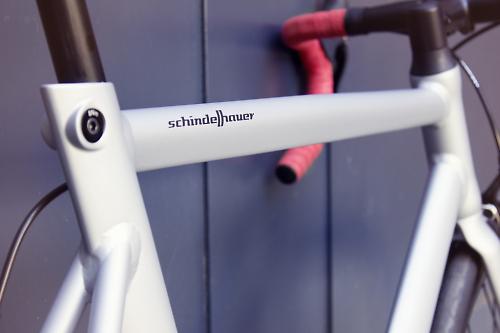 The frame is made from aluminium with a teardrop shaped seat tube incorporated the integrated seatclamp. 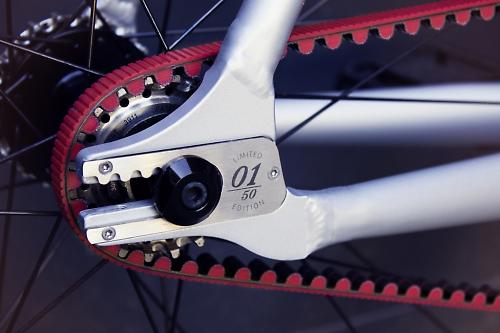 Each bike will have numbered dropouts. No price has been confirmed yet. More at www.schindelhauerbikes.com/cmsen/news/viktor-red-race/

This is the Ding, a bicycle light designed in Australia and launching on Kickstarter later this year. It's claimed to be a bit different from the majority of bike lights on the market, by using a modular design with a cycle bell that can be attached to the top of the light. That's handy if you have limited space on your handlebar for both a light and bell. That's not all, it houses three LED lights, two in the front facing forwards, and one underneath illuminating the ground around your bicycle. 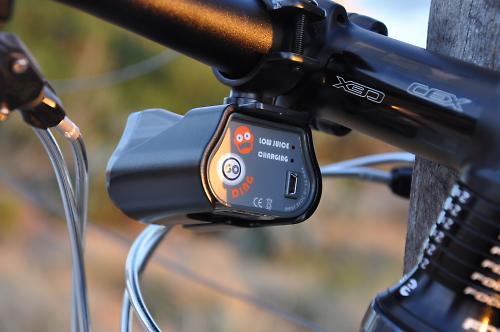 “There was a need in the market for a light that gives respect to the bike rider and other road users alike,” explained Des Burns, the Ding designer.

“A bike light serves two main purposes: to light up the path ahead of the rider and also to be clearly sighted by other road users. But often the small indistinctive light that a bike light gives off can be more of a distraction for drivers, which actually makes them unsafe for both road users and bike riders alike. 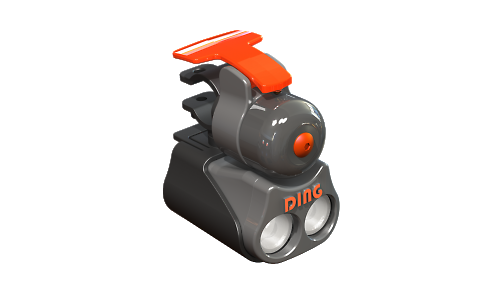 “The DING light provides great beam patterns that are non-dazzling to other road users.”

So the Ding lights uses three LEDs to power two different beam patterns, two facing forwards and one that projects light onto the ground around the bicycle. This beam spreads a rectangle area of light that covers the lower front of the bicycle, so you can see what terrain you’re riding over.

The Din is packed with sensors to detect run times so it automatically alters the output as the battery runs down, with a limp mode when the battery is nearly depleted to get you home. There are five modes from high to low beam, and a flash mode. The modes are operated by the large ‘Go Ding’ button.

The Ding pumps out 300 Lumens on the high mode, with a projected 2.5 hour run time, with that output dropping to 80 Lumens on the low mode, which should provide 7 hours of run time. 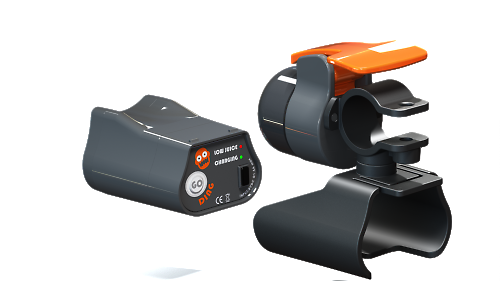 More than just being a light, the Ding has an optional bell which sits over the top of the light to reduce the mounting space. Not too many options for lights with integrated bells.

How much you’re probably wondering? One Ding light will be $95, and add in the bell for another $25. Just want the bell? That’ll be $25. Since it’s a modular system, you can always add the light, or bell, at a later date.

Put Some Fun Between Your Legs

We’ve not had a t-shirt in Tech Roundup for a while, so here’s a the amusingly titled “Put Some Fun Between Your Legs” t-shirt design. 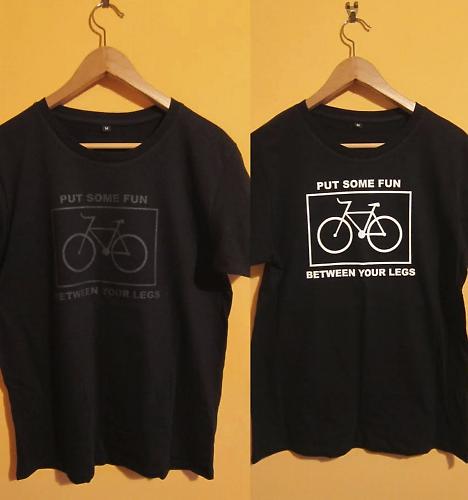 Available in different colours for men and women, and costs £15. Nice and simple. They also do leather badges and patches.

Check them out at http://putsomefunbetweenyourlegs.bigcartel.com

More from Tech Roundup next weekend.