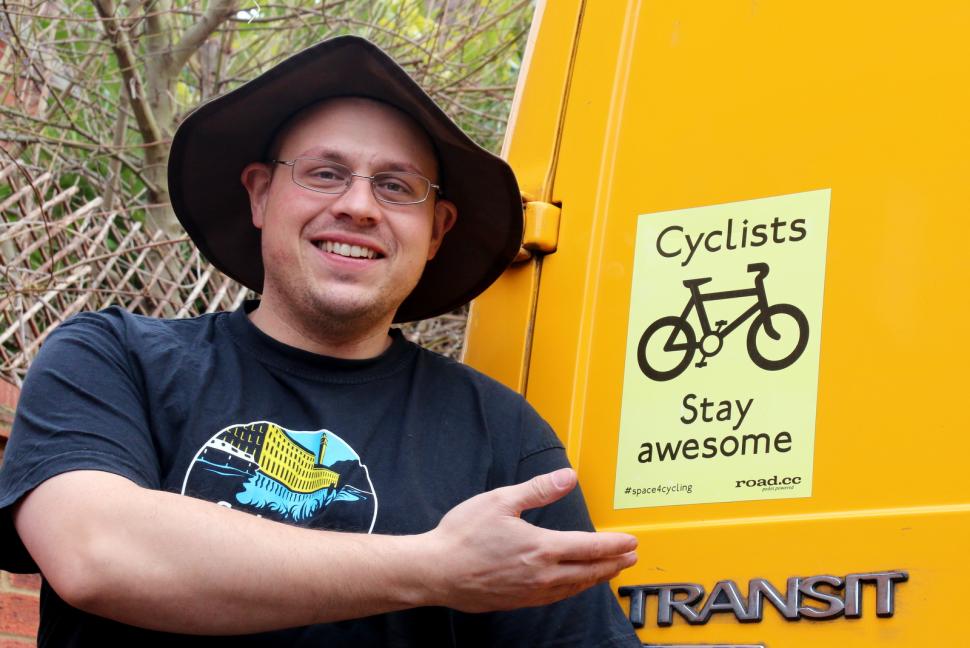 Why cyclists should stay awesome - the word from a van man

Beer wrangler reaches out to riders
by John Stevenson

Our Cyclists Stay Awesome stickers pop up in all sorts of places, but we were especially chuffed when one appeared recently in the Cambridge News on a vehicle belonging to a bona fide Van Man.

Yvan Seth, who describes himself as an independent beer wrangler, clocks up about 20,000 miles a year delivering craft beers to pubs and restaurants around Cambridge and the east of England for his one-man company Jolly Good Beer. He grabbed a Cyclists Stay Awesome sticker after seeing them mentioned on Twitter.

It's "a statement" he says, adding that as a van driver he feels it's his "responsibility" to look out for cyclists.

Originally from Western Australia, the 35-year-old started Jolly Good Beer about a year ago and soon found that mixing with Cambridge's many cyclists was challenging — for everyone.

"It can be tough riding around Cambridge," he says

He's familiar with both sides as before starting Jolly Good Beer he commuted around Cambridge to a job as a software developer.

"Having commuted by bike in Cambridge, I've had all the usual experiences. Taxis are the worst here. They're just aggressive."

When he crossed over from bikes and bits to a bright yellow For Transit and beer, Seth soon discovered that Cambridge's medieval street plan and streets full of cyclists present some difficulties.

"Driving a van you have no choice but to drive into town to make deliveries. You have to wedge yourself into spaces and take care."

It could be worse. He says can't imagine trying to make deliveries with a full-sized brewery truck. His van has a reversing camera which is helpful, "but visibility and blind spots arent that much of a problem with vans".

"It's a statement isn't it? It's not like the [Cyclists Stay Back] warning sticker.  It says 'I don't have anything against you if you ride a bike'."

Seth says he'd like to park up at the edge of town and make deliveries by bike, but with multiple kegs to transport it's not quite doable.

"I've been looking at using a Maximus cargo bike," he says, "but I need too much capacity."

We've just ordered another batch of Cyclists Stay Awesome stickers, so grab yourself one from the shop.