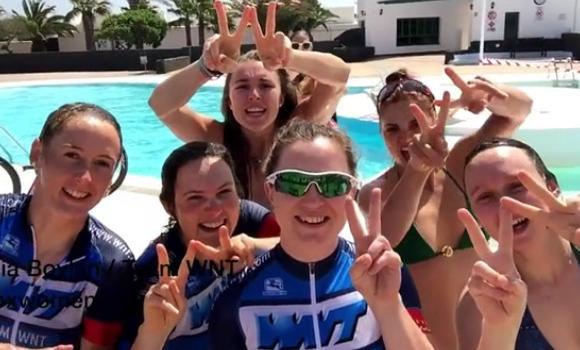 Want to see more women’s cycling on TV? There’s a Kickstarter for that...

Can you pledge a few pounds to get a women's cycling TV show off the ground? Read on.....
by Sarah Barth

A dedicated women’s cycling television show is halfway towards funding, thanks to generous supporters on a crowdfunding website.

Voxwomen Cycling is trying to raise £8,000 to get a pilot episode made and secure a broadcast slot on a ‘major TV broadcaster’.

At the time of writing it had secured more than £4,000 towards that goal - and hopes to develop the show into a monthly magazine style slot.

Its founders said on their webpage: “Voxwomen has been up and running for just a short time - since the end of February we have covered women's racing across Europe, interviewed some of the top international pro-cyclists, and our team have just come back from an amazing trip as marketing partners at the AMGEN Tour of California.

“We've gathered almost 4000 twitter followers, produced more than a video day, and had over 110,000 minutes of video viewed on our YouTube channel. Not bad for the first 3 months!
But now we need your help to get to the next step. A major TV broadcaster has agreed to take our show if we can produce a good pilot episode.

“We have got some fantastic ideas for the first programme, and have already funded the first part of filming... but we need to raise enough money to finish the pilot episode to show just how good women's cycling on TV can be. Can you help us get there?”

The founders interviewed women to find out why they were interested in a women’s only cycling show.

One, Peta McSharry said: “Because we are in the 21st century... need we expect anything less. Loving Voxwomen, thanks to Trek and Madison for opening up the world of women's cycling. Onwards and upwards.”

And Carol Mazie said: '”I am an avid recreational female road cyclist. While I enjoy watching coverage of the men's events, I am always looking to watch the women's cycling events.

“Women are tough endurance athletes and deserve equal media coverage. Additionally, it is so important for our daughters to see that men aren't the only ones on bicycles worthy of media coverage.”

If successful, the show will be distributed to as many global territories as possible. Those who pledge £35 or more will receive on demand access to the preview of the pilot show before it airs on TV.

Any amount of funding is welcomed via Kickstarter, and those who pledge £3000 or more will receive a ride and cafe stop with the Voxwomen team and a pro cyclist. There are also sponsorship arrangements available for companies.