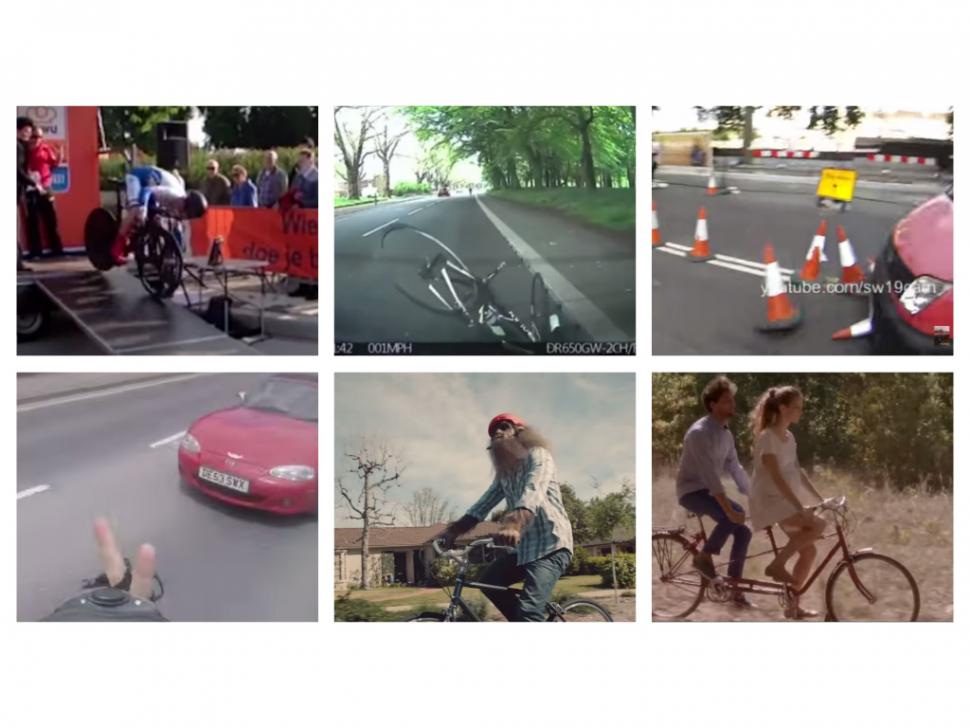 It’s not often you see quite so much reprehensible road usage in one place. So, if you haven’t got the stomach for injuries, crashes, and bad language look away now.

Good, some of you stuck around. Right, for starters, we’ve got a possible ‘broken’ record for the shortest time trial attempt ever from Remco Grasman who fell off the starting podium and injured himself quite severely.

Then, the ‘fun’ starts. It’s bad driving galore in this video round-up. To start, we have a cyclist in the red zone smashing into a parked car, followed by a nasty driver who blames a cyclist after knocking him over, a red van ploughs through road furniture to avoid a collision, a rude cyclist feels the full force of karma and the pavement, plus a couple of fantastic cycling-themed adverts at the end.

Pro cyclist falls from TT podium and breaks his arm

Remco Grasman’s bid to win the Dutch National Time Trial came to a premature end yesterday as he fell from the time trial starting podium in Emmen.

If that wasn’t bad enough, the Dutchman couldn’t catch himself during the protracted fall, until he caught the pavement below, twisting and breaking his arm.

We wish him a speedy recovery.


Cyclist in the ‘zone’ smashes into parked car

We’ve all been there, dangerously close to the red zone as we’re nearing the end of a long hard ride. We’re not sure if it’s an aerodynamic boost, or just a psychological one, but lowering your head and staring at your front wheel certainly eases the pain.

This cyclist didn't head that advice, and subsiquently his brief venture into the red zone ended pretty brutally, so much so that we’re not sure his bike was particularly roadworthy afterward. His face looked fairly banged-up too. Ouch.

It’s often strange how some people justify their actions, especially when they’re behind the wheel.

Here we have an incident in which a cyclist is knocked off his bike after navigating a particularly strange bit of temporary road marking. The debate is reasonably open as to who - the cyclist or the driver - followed the suggested driving route through the unmarked bit of road correctly. However, the answer for the question ‘who is to blame for the collision?’ lies reasonably firmly with the driver.

The couple in the car didn’t really see it that way though. Following the driver’s initial aggressive confrontation with the cyclist, who was still picking himself up off the road, the female passenger starts explaining her somewhat strange outlook on the incident. Here are some of her choice quotes.

“[This wouldn’t have happened] if you didn’t have your hand on my car scaring me and my pets.”

“You’ll have to move [the car] I’m not having the dog sat there being victimised by you.”

“Don’t take my picture, it’s illegal, data protection says that you can’t do that until the police are present.”

Fortunately this time nobody gets knocked off their bike, but it’s a close call.

Some people might stipulate that the way this video ends has a dash of karma to it.

We’ll often find old videos that have laid dormant for years before someone somewhere picks them up and sends them ‘viral’. This is one of them:

This confrontation between a cyclist and a pair of police officers came about after the rider accused the officers of breaking the law by banging on their window as his cycled past them idling in a bus lane.

The article, which featured in the Daily Record was cleared up with a quick call to the local police force.

They said: “The video footage in question was taken over two years ago and involves officers who, at that time, worked within Lothian & Borders Police.

"The vehicle was legally permitted to be within the bus lane at that time of the day and there was no intrusion into any cycle paths. No complaint was received in relation to this matter, or the officers in question.”


Shed the monster - ride a bike

Cycling is about more than exercise. It’s a lifestyle choice that lifts your mood and gets you out of the house and out of your stressful little world, even for a few minutes. At least that’s what this film from cycling charity PeopleForBikes is trying to tell us.

The advert’s director Evan Fry told Ad Week that although it sounds corny and pretentious “ever since I was a little kid, cycling in one form or another has been my therapy, my church, my athletic pursuit, my trusted friend and my main vehicle for growth."

We feel you Evan.

Life on a bike - courtesy of La Redout

Finally, womenswear retailer La Redoute recently released this charming advert which depicts a woman’s life through the things she’s experienced in the saddle.

You’ll see her life go full circle as she rides - stabiliser assisted - down her garden path as a child, through her wobbly adolescence, on to her tandem romance, and finally to her releasing her own daughter down the garden path on two wheels.