Shock horror - commuting gear is getting darned sexy
by nick_rearden

The Taiwanese company TH Industries took the opportunity of last week's Sea Otter Classic to launch a number of interesting items under their Full Speed Ahead (FSA) brand - all as yet unpriced for the UK - mostly and unsurprisingly for top-end or middling lightweight racing and sportive riding.

But perhaps their most interesting item was - gasp - a commuter product under a brand-new brand.  We may be going out on a limb here but we think that the Metropolis PT crankset is a genuine innovation that will shortly be all over the place. City bike designers must be currently very busy integrating it into their 2011 plans.

The 20th edition of the Sea Otter Classic just finished in Monterey, California is a days-long festival of everything that is wonderful about cycling in California but up until this year it wouldn't have come up on radar for road cyclists as it was pretty much devoted to off-road bikes. The burgeoning interest in road riding, however, has made it irresistible for manufacturers to be showing off their new roadie wares even if it's in the form of quiet insider previews. And there were road races and a programme of "Gran Fondo" - doesn't that better than "Sportive"? - rides for mass participation among the vineyards surrounding Monterey.

Along with all the bike companies you would expect to see in California in the spring, the usually unheard-of name of TH Industries was there taking it seriously as an industry show, along with its rather better-known brand name of FSA. Starting with the more mundane parts of the bicycle like handlebars, stems, seatposts and more recently chainsets, the FSA people have built for themselves a solid reputation as an original equipment manufacturer (oem) of panache for the big bike brands who mostly build, or have built, their products in Taiwan.

They have, in a few short years, got themselves onto most of the "cool" company's bikes partly, we're sure, because they're a good reliable supplier of these parts at the right price but, from our perspective, mostly because they've added vavavoom to these erstwhile ignored and under-appreciated areas of the bike.

But they've branched out lately into boutique products as well, of the type seen in your local bike shop's illuminated glass display cabinet and apart from some size and cosmetic changes to their excellent K-Force and K-Wing chainsets, handlebars and seatposts, there's a brand new Team Issue family of super light components - 170g for the stem - as seen on the bikes of, for example, Astana. 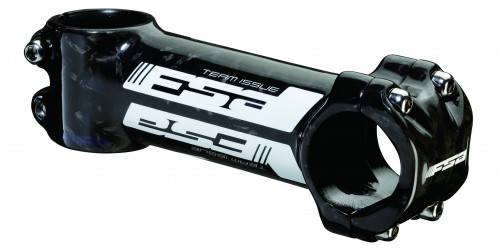 Remember anodized coloured parts on mountain bikes? They're back with a vengeance for fixies now with these purple or black variants of the popular and rather lovely Gimondi track crankset with cold-forged and exquisitely polished arms. 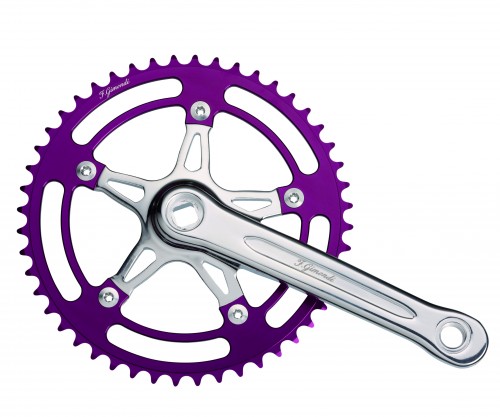 What really arrested our attention was the new Metropolis-branded two-speed PT crankset (for Patterson, Sam Patterson the engineer who worked at SRAM for years and helped develop the original GripShift) for city utility bikes. And there are matching bars, stems and seatposts, obviously.

According to the good folks, "Metropolis is positioned right where the confluence of the past and the future meet in the form of uniquely styled products." Mmm. What we liked was the equivalent of 45 and 28 tooth chainrings in an internal planetary mechanism that works off a simple thumbshifter.

We have seen at least two, two-speed non-derailleur chainset systems over the last few years but this is the first one that fits on a perfectly standard 68mm bottom bracket with standard cable runs. So there are ample opportunities for you or your favourite mechanic to retro-fit this yourself once it becomes available in shops later in the year.

Due to the integral chainguard design, it's certainly the first we've seen where you could wear non-bicycle-clipped trousers, which has got to be a plus for city use. Two interesting thoughts: suppose there was a belt drive version? And suppose you married it to the new (say it quietly) Shimano Alfine 11-speed internal-geared rear hub? 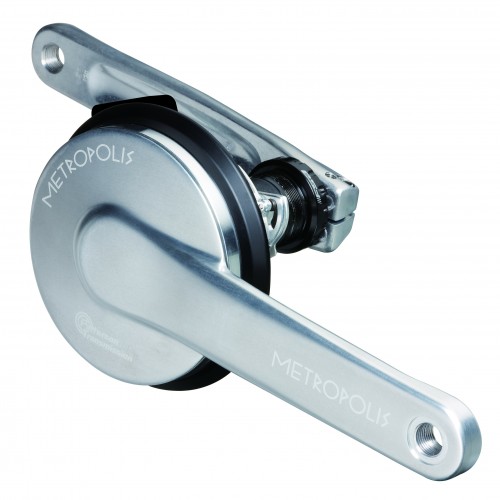