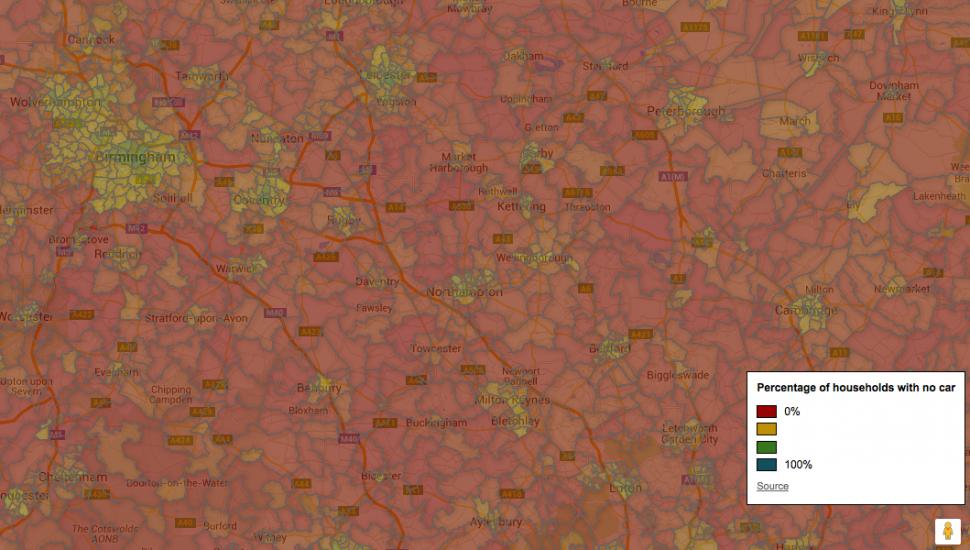 Map: Find out car ownership levels in YOUR neighbourhood

Are politicians spending infrastructure money in the right way? Map suggests many neighbourhoods are NOT car dependent
by Sarah Barth

Many urban areas of England and Wales are populated by a majority of residents who don’t own cars, a new data visualisation has shown.

In London and Newcastle some areas have less than 30 per cent car ownership, leading to fresh calls for more - and better targeted - cycling and walking infrastructure.

Created by Tom Forth of the data consultancy Imactivate, the images map car ownership as declared in the 2011 census.

While rural areas continue to be highly dependent on cars for transport, an active-travel consultant Philip Insall suggested to Bike Biz that the map could be used to ask local politicians whether they know the car-ownership stats in their wards.

Similar maps for Northern Ireland and Scotland can be found at these links.

We reported in 2014 how Peterborough, Colchester and Milton Keynes were identified by the Campaign for Better Transport as the hardest places in England to live if you don't have a car.

However just last month we reported the opposite side of the story - that global bicycle ownership has halved in the past 30 years, according to research.

The study, in the Journal of Transport & Health, analysed data from 1.25 billion households between 1981 and 2012, and is the first to assess global bicycle ownership over time.

China showed the most dramatic changes: in 1992 more than 97% of households owned a bicycle, the figure almost halving to 48.7% in 2007 before rising again to 63.2% in 2009. Northern Europe showed the highest bicycle ownership, while the lowest were in parts of Africa and Central Asia.

Removing India and China from the picture – their high populations skewing the data – researchers noted a steady global decline in household bicycle ownership from an average of 60% in 1989 to just 32% in 2012.

Researchers, based at Johns Hopkins University in the US, weighted data to make it comparable between different countries. They found that geographical proximity and cultural similarities equals similar bicycle ownership levels between countries.

Olufolajimi Oke, lead author of the study, said: "If a country doing well in terms of bicycle ownership, surrounding countries also seem to do well.”