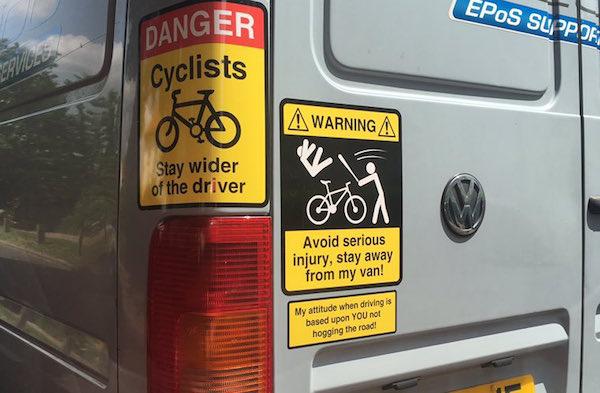 Do these 'baseball bat' van stickers incite violence against cyclists?

"Avoid serious injury, stay away from my van" – Stevenage business reported to police...
by Alex Bowden

Just a mediocre joke or something more serious? BikeBiz reports on a Stevenage business that has been reported to the police for the stickers adorning one of its vans.

The STS2000 van, spotted in Letchworth by freelance photographer Trevor Coultart, has a trio of stickers directed towards cyclists on its rear.

Another reads: “Avoid serious injury, stay away from my van!” – accompanied by a picture of a stick man clobbering a cyclist with a baseball bat.

Video: Driver cuts up cyclist - then threatens him with baseball bat

The third says simply: “My attitude when driving is based upon YOU not hogging the road!”

Speaking to BikeBiz, Coultart said: "I drove past it parked and did two U-turns to get the photo. Is it incitement to violence? Threatening behaviour?"

The ‘avoid serious injury…’ sign appears to be one of many along similar lines. ‘Avoid serious injury, don’t tell me how to do my job!’ seems to be the most common, but an almost identical sticker is also available ending ‘… stay away from my bike!’ There’s even one in the same style that reads: “Tampering with my cello may result in an ass whoopin’ you’ll never forget!”

If that puts the tone of the sticker in perspective, the question is perhaps whether that comes across rather differently when directed towards those who could quite genuinely come to harm.

Yellow "cyclists stay back" stickers have become infamous in recent years with many cyclists of the opinion that the wording implies it is only the person on the bike and not the driver who is responsible for the former’s safety.

They have also proliferated. Originally introduced by Transport for London for buses, they are now seen on all manner of vehicles – even cars. Here at road.cc we responded by producing our ‘Cyclists stay awesome’ stickers so that you can let people know that you care – even when you're driving.