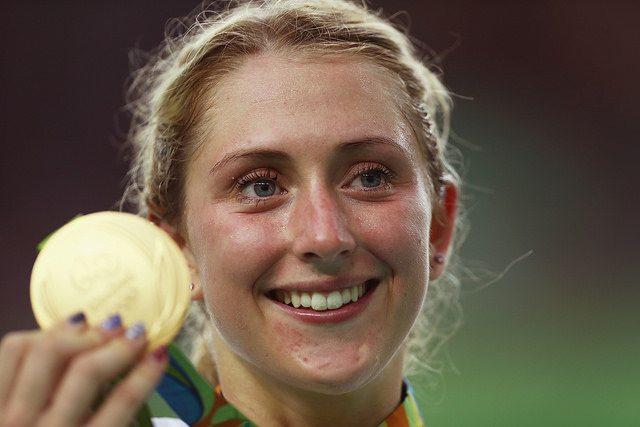 The UK’s biggest bicycle retailer, Halfords, says that the success in Rio of its “Olympic cycling heroes” Sir Bradley Wiggins and Laura Trott have helped turn around its sales in the category.

In July, the car parts-to-bicycles business said that compared to the same period in 2015, cycling sales had fallen by 4.0 per cent in the 13 weeks to 1 July on a like-for-like basis, in other words stripping out the effect of newly opened or expanded stores. Poor weather was attributed as a factor.

Since then, however, the cycling part of the business has swung back into strong growth in like-for-like revenue, with a trading statement released today revealing that it rose 12.5 per cent in the 7 weeks to 19 August – the Friday after the track programme in Rio finished with Team GB top of the medal table.

In June, Halfords announced a collaboration with Trott, winner of team pursuit and omnium gold at Rio, the same titles she had won at London 2012, launching one hybrid and three road bikes aimed at women.

Last November, the retailer announced the launch of a children’s bike range in partnership with Sir Bradley Wiggins, who in helping Team GB defend its team pursuit title in Rio became Great Britain’s most decorated Olympian.

It won’t have harmed Halfords either that the two former Olympic champions whose names are on bikes already sold through it – Chris Boardman and Victoria Pendelton – were also prominent members of the BBC commentary ream in Brazil.

Chief executive Jill McDonald said: “I am pleased to report a solid year-to-date trading performance, with group sales up 4.8 per cent and service-related sales in double-digit growth as we continue to strengthen Halfords' position as the first choice for customers' journeys.

“We continue to make good progress on our strategic initiatives; we can now match 25 per cent of our retail sales to specific customers compared to only 3 per cent last year and in recent weeks we have successfully piloted contactless payments and also launched the new Cycle Republic website."

Commenting last month on the new website for Halfords’ standalone cycling fascia, which now has 12 stores, Cycle Republic managing director Peter Kimberley said: “We’ve enjoyed fantastic high street visibility with our 12 shops which occupy city locations in key cycling areas, but with the launch of our first fully transactional website we can reach cyclists across the country, bring them our premium range of bikes, parts, accessories and clothing to suit enthusiasts and city cyclists alike.”

“As the site continues to grow we will ensure a seamless experience to customers. Each bricks and mortar shop has a micro site within the site so users can interact with the team and read testimonials from their local community,” he added.