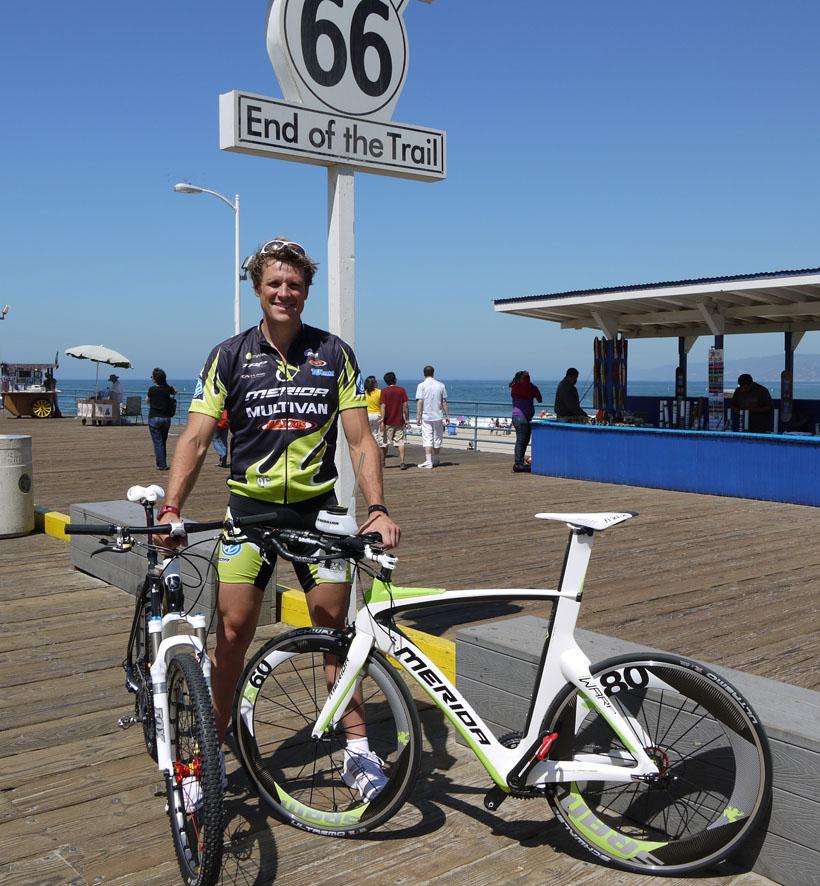 The wife of Olympic rower James Cracknell has revealed that he suffered brain damage after being hit by a truck last week while cycling in the United States and that she had initially feared that his life support machine would have to be switched off. TV presenter Beverley Turner added that it could be six months before Cracknell makes a full recovery from his injuries.

Cracknell, who has participated in a number of TV programmes focusing on his adventures, including long-distance journeys on bikes and boats, since his retirement from rowing, was hit from behind by the truck in Arizona while filming a documentary for the Discovery Channel.

The athlete is now semi-conscious in a neuro-trauma recovery ward, and his wife said in an interview with the Daily Telegraph that she believes it is Cracknell’s fitness that is helping him pull through after suffering head injuries.

“I was told that although he fractured his skull at the back, the brain injury is at the front, where his brain was catapulted forward as his helmet hit the road at high speed,” she said.

“He feels so passionately about bike safety and had just bought a new Alpina bike helmet that sits lower on the back of the head. It took the blow far more effectively than a normal helmet and kept the damage to a minimum,” Turner continued, adding that doctors told her that the helmet – split in two in the impact – had saved his life.

“All the same, he’s sustained what’s known as a contrecoup injury to his frontal lobe, with bleeding, bruising and swelling in the area that governs personality, decision making and motivation - all the characteristics that make James who he is,” she added.

Turner was told of her husband’s injuries as she prepared to return to the UK after spending some time in the US following his journey. “Luckily, I had been out supporting James a couple of days previously and was in Las Vegas, getting ready to fly back to Britain, when the phone rang in my hotel. Before I’d even picked up the receiver, I knew something was wrong,” she explained.

“One of James’s trainers told me he’d been in an accident and I needed to get to the hospital immediately. My first thought was for the children; Croyde, aged six and 16-month old Kiki were back in London with my mother and I felt sick at the prospect of telling them that something had happened to Daddy.”

Doctors have said that there is no reason that Cracknell, who won gold in the coxless fours in Sydney in 2000 and Athens in 2004, should not stage a full recovery from his injuries, although it is not fully clear how soon that might be.
“We don’t know what timescale that will be, but within three to six months he should appear to be himself. Only those closest to him may be able to discern a subtle difference,” Turner said.

“It’s a fact of life that we all occasionally wish we could change our husband or wife’s annoying habits but, hand on heart, I can say I want James to stay exactly as he is and come back to me the same driven, focused, kind and loving husband I married,” she continued.

“He is so fatigued that he generally falls asleep with exhaustion within moments of waking up,” she added. “It’s heartbreaking to hear him muttering that he’s 'let everyone down’, when all this has happened through no fault of his own. But that’s James through and through.”

Cracknell’s planned bike ride from Canada to Mexico with his friend Ben Fogle, who has flown out to Arizona, for a BBC documentary has now been put on hold indefinitely, and Turner is aware that her husband faces a long journey back from his injuries.

“I’m not going to rush James’s recovery,” she insists. “We have a long, hard road to travel, and I don’t know how long it will take, but I do know it will only be over the day James picks up his trainers again and goes for a run.”