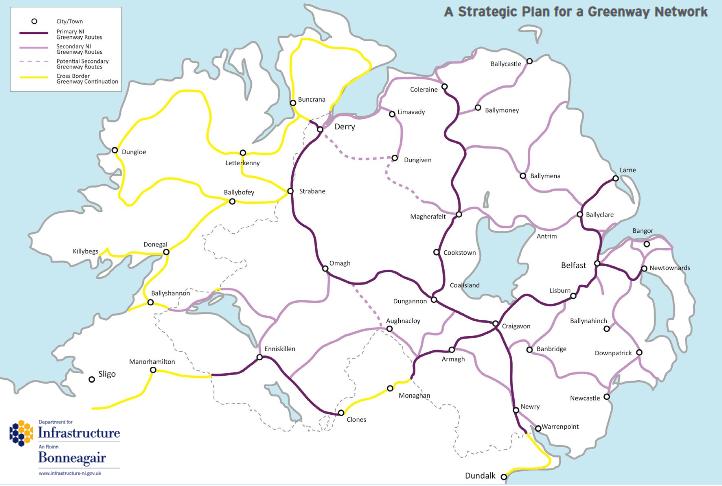 EU pledges £19.5m to create sustainable travel routes on either side of the Irish border

The EU is to fund almost 80km of greenways linking towns and cities either side of the Irish border. The BBC reports that more than €23m (£19.5m) in funding will also be matched by The Department for Infrastructure in Northern Ireland and Ireland's Department of Transport.

New projects will connect Newry with Carlingford; and Londonderry and Strabane with Donegal. The second phase of the Ulster Canal Greenway will also gain funding.

Gina McIntyre of the Special EU Programmes Body said each of the projects would "substantially increase the quality and quantity of greenway offering on both sides of the border".

The North West greenway will receive €14.9m. It comprises three routes totalling 46.5km and will link Derry to Buncrana in County Donegal, Derry to the Donegal village of Muff, and Strabane to Lifford.

The Carlingford Lough Greenway – a 10km route linking Newry to Carlingford – has been offered €3.5m euros.

The second phase of the Ulster Canal Greenway, which runs from Smithborough in County Monaghan to Armagh, is to receive €4.9m.

Ireland’s Minister for Transport, Tourism and Sport Shane Ross said: "The potential for these routes to be used by commuters travelling to and from work each day offers an opportunity to reduce dependence on the private car and help reduce carbon emissions.

"They also offer excellent potential to attract visitors to the areas with positive impacts on local economies."

Northern Ireland’s Department for Infrastructure last month unveiled plans for a £150 million network of greenways covering 1,000 kilometres across the country. The aim is for three quarters of those routes will be completed within the next decade.