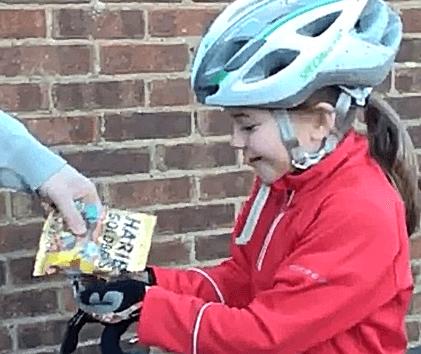 Peter Sagan tells British girl, 8, who filmed Haribo tribute video that she could "become world champion in a few years"

​An eight-year-old girl from Northamptonshire who posted a film to Twitter showing herself eating some Haribo after a long ride received a reply from the rider who inspired it, Peter Sagan - who told her, "One day you could even become world  champion in a few years."

Ruby Isaac's tribute to the back-to-back men's road world champion was made after he was filmed hoovering up some Haribo, dropped into his cupped hands by a soigneur,  immediately after the Bora-Hansgrohe star won the Belgian one-day race Kuurne-Brussels-Kuurne the weekend before last.

> Video: Peter Sagan hoovers up the Haribo after winning in Belgium this weekend

She was filmed in a homage to that footage after finishing a bike ride yesterday evening.

Her tweet has been 'liked' more than 2,000 times and has been retweeted by nearly 400 people.

I was a bit tired after a long ride this evening....Luckily I got a tip from @petosagan.......@gcntweet pic.twitter.com/G92rYJ2cnp

Here's the reply from Sagan.

You could even become a world champion in a few years... So, remember never give up! https://t.co/Tc7tB9ZuNL

The world champion has almost 600,000 followers on Twitter, but only follows 66 people himself - and now, Ruby is among them, joining the likes of Alberto Contador and Vincenzo Nibali, the only current riders to have won all three of cycling's Grand Tours, as well as figures from outside cycling including Arnold Scharzenneger and Jenson Button.

Ruby has only been on Twitter since January but already has almost 500 followers and even the briefest of glances at her timeline reveals she is not only a huge fan of pro cycling and women's racing in particular, but also gets in the saddle herself whenever she can.

It's early days in her own fledgling cycling career, and sensibly she's taking a cross-disciplinary approach.

Last month, she finished third in a mountain bike race at Lea Valley VeloPark, and other posts to Twitter show her receiving cyclo-cross coaching in Milton Keynes from multiple British champion Helen Wymen, taking to the boards of the Street Velodrome at the recent London Bike Show, winning a race at the Calshot Winter Series, and riding on the rollers in preparation for the coming road season.

Clearly a passion for cycling is essential for any youngster eyeing a future career in the sport and Ruby has that in spades - we wish her all the best with it.