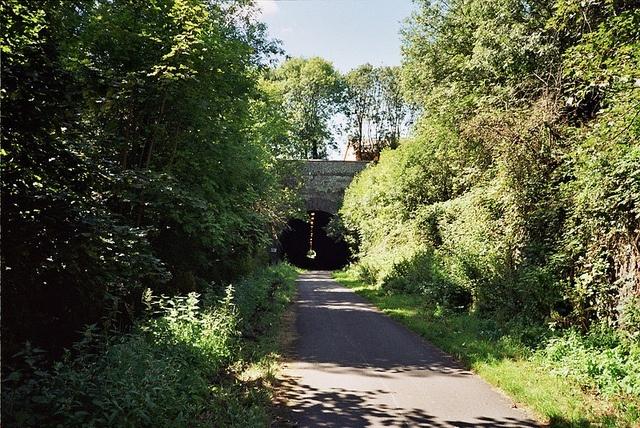 Gang's behaviour suggests that they may have been looking to steal bikes to order...
by Simon_MacMichael

A Bristol woman has described how she and her friends were ambushed by a group of youths while riding on one of Britain’s most popular dedicated cycling facilities, the Bristol & Bath Railway Path.

The incident happened on the morning of Saturday 20 May near the Staple Hill Tunnel in east Bristol, reports the Bristol Post.

It is believed that the group of youths may have been loitering by the path in an attempt to steal a bike to order.

Susanne Gordon, 36, told the newspaper: “We were just cycling back from Saltford – coming out of the tunnel there at the Bristol end.

“There were three youths standing at the end of the tunnel checking out bikes.

“The third one was oldest, he was black or mixed race with an afro. He was running the show.”

She continued: “On the approach I could see them – I’m a teacher and I have a radar for when young people aren’t up to much good.

“They were staring intently at the bikes as they went past."

“I looked right at [the] oldest one and said, ‘Good morning’.

“He said, ‘Nah, it’s not a Whyte’,” which made her believe the youths were looking to steal bikes to order.

However, she explained that the situation then escalated.

Ms Gordon and her friends stopped further along her path to call police on 101 to flag up the youths’ suspicious behaviour.

“Then we noticed the three kids cycling towards us,” she continued. “They cycled past us and the oldest one spat in the direction of a woman in our group.”

Deciding that the sensible thing to do was to get away from the youths, Ms Gordon and her friends rode off, only to discover them lying in wait further ahead.

Suzanne and her friends decided it was best to get out of the area so they stopped calling 101 and cycled on.

But the gang had laid an ambush further up the path, presumably using nearby roads to get ahead of them.

She said: “As we cycled on we saw the oldest one had put his bike across the left hand side of the cycle path.

“The other two had abandoned their bikes and jumped into the trees on the hand side of the path.

“As we cycled past we managed to get around the kid who was on his bike. Then he shouted ‘get her!’ – he was talking about me.”

At that point, she said the other two ran out from the trees and attempted to grab her.

“The youngest one was the closest to me but he was a bit half-hearted and he didn’t catch us,” she explained. “His hesitation is what saved us.”

After that escape, she and her friends rode to a nearby Morrisons supermarket, where they called 999.

“I was quite lucky for it not to have become something more serious,” Ms Gordon reflected.

“I knew what was going on but I didn’t realise the potential for injury or losing my bike. I wasn’t thinking much.”

“It was 11:45 in the morning with lots of people around – broad daylight."

An Avon and Somerset Constabulary spokesman said: "We were called to the Bristol to Bath Cycle Path near Acacia Road, at around midday, on May 20 to reports of a group of teenage boys intimidating and harassing a group of cyclists using the path.

"We attended the area after the call to search for anyone matching the descriptions given, but no one was found.

"One of the youths was described as a white teenage boy, aged around 13, 5ft 2ins tall, with blonde hair, wearing a red and black top with jeans.

"Another was described as a teenage boy, of mixed race appearance, aged around 16, around 5ft 7ins and wearing a grey hoodie.

"If you have any information or concerns please call 101 and ask to speak to the local beat team in the area where you live.

"They never ask for your details or trace your call."