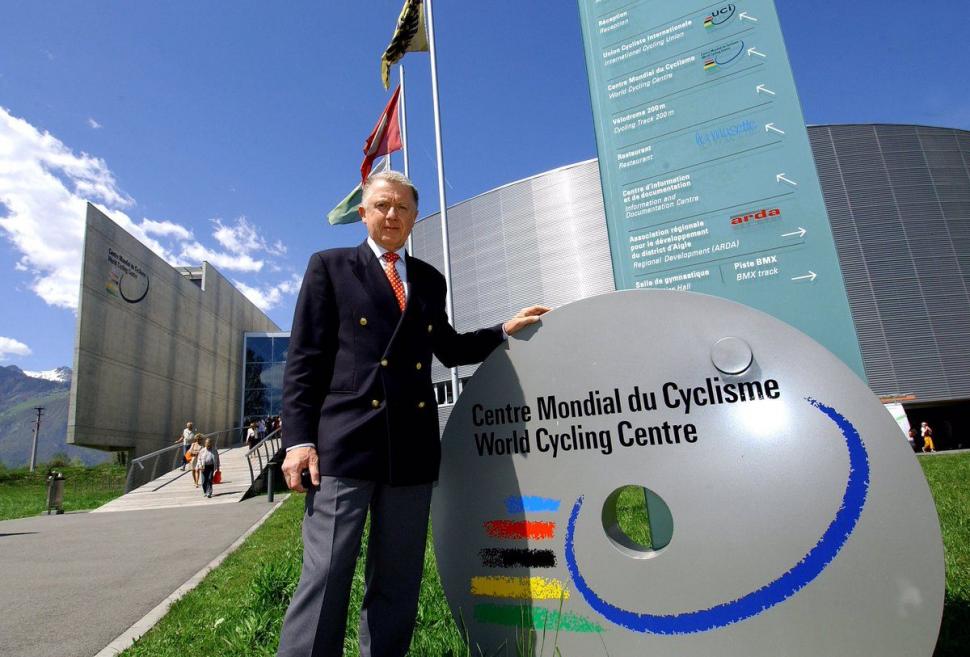 Former UCI president Hein Verbruggen has died of leukaemia at the age of 75.

The Dutchman was president of world cycling’s governing body from 1991 to 2005 when he was succeeded by Pat McQuaid, and remained honorary president thereafter.

Under his leadership, the international amateur and professional cycling federations were brought under the wing of the UCI, paving the way for pro riders to compete at the Olympic Games, starting with Atlanta in 1996.

In his final year in office, he instituted the UCI ProTour, the forerunner to today’s UCI WorldTour, a move that brought the governing body into conflict with leading teams as well as organisers of races including the Tour de France.

The latter half of his tenure at the top of world cycling’s governing body coincided with Lance Armstrong’s dominance of the Tour de France, when he won the yellow jersey for seven years in a row.

Verbruggen was close to the Texan and was alleged by ex-US Postal rider Tyler Hamilton to have helped Armstrong cover up a positive test for EPO at the 2001 Tour de Suisse.

The former UCI president vehemently denied those allegations, saying in 2011 – the year before Armstrong was banned from cycling for life and stripped of those seven Tour de France wins – that there was no cover-up.

“That’s impossible,” he said, “because there is nothing. I repeat again: Lance Armstrong has never used doping. Never, never, never.

“And I say this not because I am a friend of his, because that is not true. I say it because I’m sure.”

Armstrong himself would confess to doping in a television interview with Oprah Winfrey in January 2013.

Later that year, he told the Daily Mail that Verbruggen had helped him cover up a positive test for a banned corticosteroid during the 1999 Tour de France.

It was Armstrong’s first participation in the race since recovering from cancer and would result in his first overall victory, and came the year after the race had been engulfed by the Festina scandal.

He said that Verbruggen told him: “This is a real problem for me, this is the knockout punch for our sport, so we’ve got to come up with something’.”

According to Armstrong, Verbruggen suggested he obtain a backdated therapeutic use exemption for a saddle sore cream containing the substance, which he duly did.

The Dutchman always denied that had happened, and the report of the Cycling Independent Reform Commission ordered in 2013 by incoming UCI president Brian Cookson stopped short of saying that Verbruggen had helped Armstrong conceal positive tests.

But it did say that under Verbruggen and McQuaid, the UCI “exempted Armstrong from rules, failed to target test him despite the suspicions, and publicly supported him against allegations of doping, even as late as 2012.”

It added that “requesting and accepting donations from Lance Armstrong, given the suspicions, left UCI open to criticism.”

Verbruggen, who was unafraid to use litigation against his critics – Irish ex-pro cyclist turned writer and journalist Paul Kimmage being one notable target – made no secret of his dislike of Cookson, who for his part was determined to oust him from his position as honorary president.

In December 2015, Verbruggen claimed that the International Olympic Committee, which he was a member of from 1996 to 2008, had brokered a deal with the UCI to enable him to remain in that position for life.

But Cookson countered that given Verbruggen’s ongoing criticism of the UCI and his leadership of it, he considered that agreement “null.”

On Twitter, the UCI said that it was “sad to hear about the passing of former president and IOC member Hein Verbruggen. Our thoughts are with his family and friends.”

In a statement today, the IOC, which Verbruggen remained an honorary member of until his death, described him as “a cycling fanatic and a true sports fan.”

IOC president Thomas Bach said: “Hein Verbruggen was a fearless fighter for his sport. Thanks to his great engagement and his management skills, he greatly contributed to the success of the Olympic Games Beijing 2008 as Chair of the Coordination Commission.

“For this he will be always remembered.”