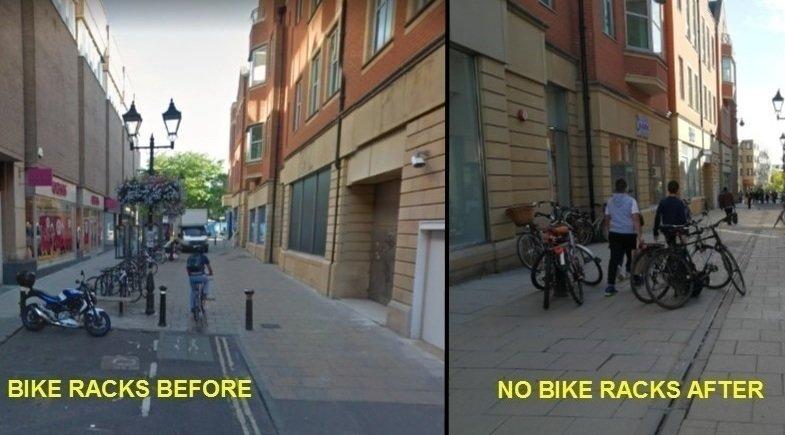 A major new shopping centre has opened in Oxford with just 3 per cent of the promised 1,000 cycle spaces.

The Westgate development in Oxford houses a John Lewis and dozens of other stores and restaurants, but according to local campaigners Cyclox:

The developer has run rings around the planning authorities and has breached their planning conditions. It is the City Council’s obligation now to enforce provision of 972 extra cycle parking spaces.

There are no cycle parking spaces in convenient locations – none at all.

According to a petition started by the Green Party, “One of the planning conditions attached to the development of the Westgate Shopping Centre was the provision of 1022 bike parking spaces.

“These bike racks were intended to replace those removed from the City Centre during the construction works and provide additional spaces to encourage more sustainable travel.

“So far, Labour-run Oxford City Council (who voted through the development on their own land) have failed to enforce this condition, allowing the Westgate to open with only a small fraction of the promised cycle parking and without the promised cycle hub.

With over 1,300 signatures, the issue can now be forced to a debate by city councillors.

The Westgate development has removed from its website a page that last week offered a members only cycle hub open from 7am - 11pm.

The facilities advertised for £10-£20 a year included:

- Cycle parking (secured by your own lock)

It does however still promise: “If you come to Westgate by bike, you'll be able to park conveniently around the centre using our bicycle spaces in the vicinity of Westgate.”