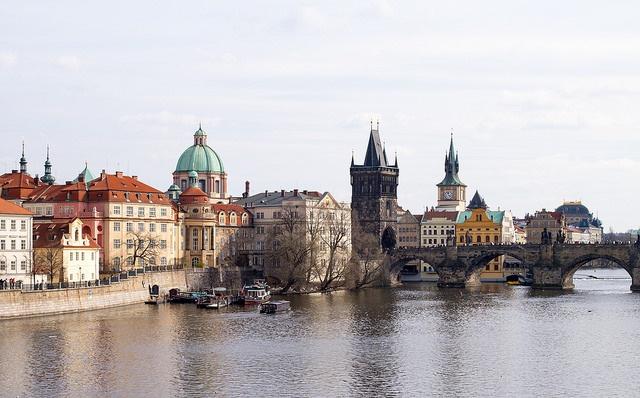 Prague to ban bikes (but not cars) from popular tourist areas

Prague is to ban cyclists from some of its most visited areas between the hours of 10am and 5pm, arguing that they are a hazard to tourists. Motorists with a permit will still be permitted.

The Guardian reports that the new ruling, which will come into effect from May, will keep cyclists out of areas including part of Wenceslas Square, Karlova street on the approach to the 600-year-old Charles Bridge, and Josefov, site of the city’s former Jewish ghetto.

“We are not against cyclists, but the problem is space,” said Oldřich Lomecký, the mayor of Prague 1, the municipality introducing the ban. “In a pedestrian zone, the advantage should be for pedestrians, not cyclists. Every day there is conflict between cyclists and pedestrians. This is the core of the problem.”

Prague’s official goal is for cycling to account for five per cent of all journeys by 2020.

Speaking on behalf of the group, Vratislav Filler told the sort of story that may sound familiar to those who regularly visit the news pages of this website.

“Data shows there were 21 pedestrians hit by cars over the past 10 years, and only three involved in accidents with bicycles,” he said.

“The council just doesn’t think supporting cycling or creating corridors for cyclists is necessary in the city centre. It means cyclists are going to be forced on to streets that are dangerous because they have heavy car traffic and busy tram lines.”

The ban was originally conceived as one on the motorised bikes that have been marketed to tourists since the city banned Segways in 2016, but has since been expanded to include all bikes.

In 2011, two Prague artists drew attention to the dearth of bike lanes in the Czech capital by hooking a pico projector up to a bike so that they could project cycle lane markings onto the road ahead.

The resultant video pretty much proves everyone’s point. The cyclist is first seen on the road being passed by fast-moving cars, but ends with him weaving in and out of pedestrians at a fair old lick.