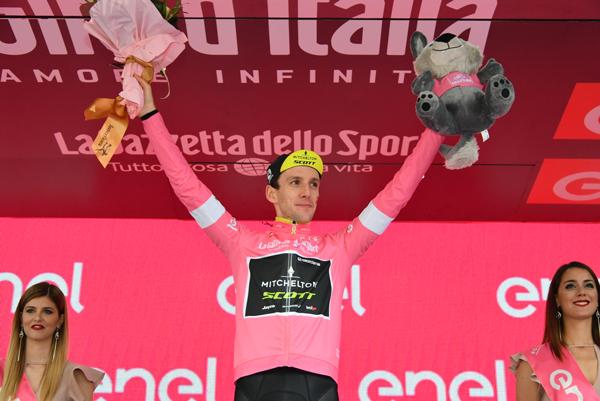 Simon Yates has taken a huge step towards clinching the overall victory at the Giro d'Italia this afternoon, as he rode the time trial of his life while his closest rival, the defending champion Tom Dumoulin, still lies almost a minute behind him in second place overall.

The win today went to Rohan Dennis of BMC Racing, with former world champion Tony Martin of Katusha-Alpecin second., who unlike Team Sunweb rider Dumoulin have been able to conserve their energy for this stage.

The current wearer of the rainbow jersey was widely seen as having a strong opportunity to get into the overall lead on today's 34.2-kilometre course from Trento to Rovereto.

The penultimate rider on the course, Dumoulin began the time trial 2 minutes 11 seconds down on Mitchelton-Scott rider Yates himself had said he might lose as much as 4 seconds a kilometre to the Dutchman.

That would have been enough for Dumoulin to take a narrow lead, but he only managed to take a minute and a quarter out of the Britain, who still leads by 56 seconds.

After the stage, Yates said: “I'm really happy. I felt good in the first half. I had a good rhythm. I was trying to hold on to my position. But I died in the final 10 kilometres.

"Being in the lead after the time trial changes my tactics for the remaining stages. Unfortunately for the fans, I might be more defensive.

"I'd like to have a bigger gap but I'm very satisfied with where I stand now.”

There are still some tough mountain stages to come ahead of a sprinter-friendly stage in Rome on Sunday, but barring disaster,  the 25-year-old from Bury appears to be heading towards a maiden Grand Tour victory.

Chris Froome of Team Sky, meanwhile, is back in the hunt for a podium place after finishing fifth today, putting him third on the podium behind Yates, Dumoulin and Bahrain-Merida's Domenico Pozzovivo.

Froome wasn't the only British rider in the top 10 today, with Katusha-Alpecin's Alex Dowsett - a time trial stage winner at the 2013 Giro d'Italia, when he rode for Movistar - seventh today.