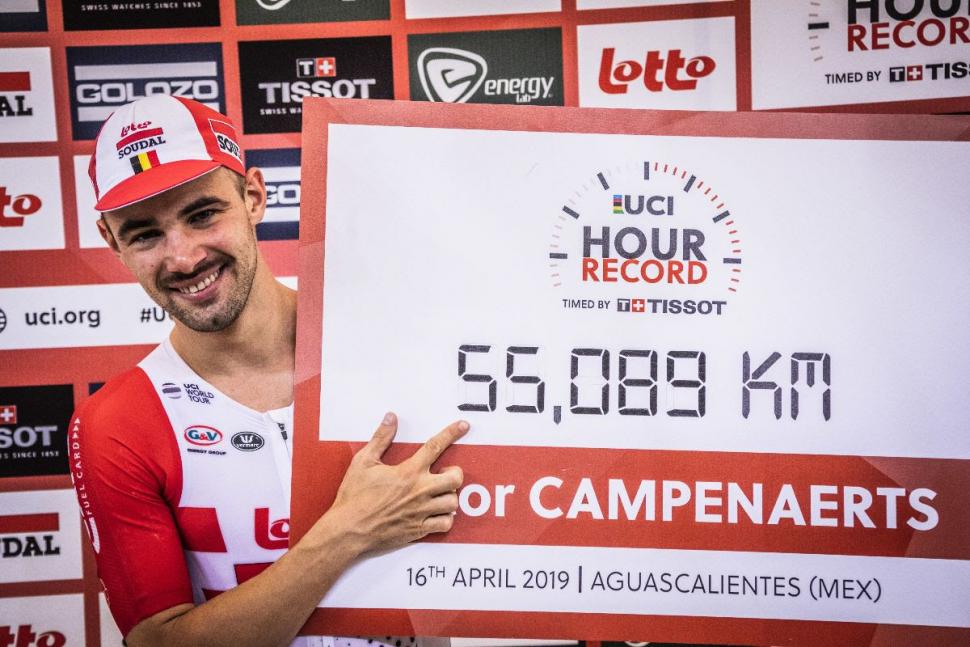 Belgian undertook his record breaking ride at velodrome in Aguascalientes, Mexico
by Simon_MacMichael

Victor Campenaerts has set a new UCI Hour record in Aguascalientes, Mexico today, his distance of 55.089 kilometres surpassing by more than two laps the 54.526 kilometres ridden by Sir Bradley Wiggins in London almost four years ago.

The Lotto-Soudal rider, benefiting from undertaking his effort at altitude, - Aguascalientes lies 1,890 metres above sea level - never looked in trouble as he quickly built up speed early on before settling into a consistent pace of around 55 kilometres an hour.

Campenaerts said: “I am super happy, I am part of the greatest riders of the Hour record. I thought about it for a long time. I am happy I broke the magic mark of 55 kilometres.

“It was super hard, I was a bit optimistic in the first 30 minutes and then I said myself I had to slow down a bit the pace, but even with that I think I was faster that Wiggins in all parts. The team gave me all the confidence I needed and I was able to answer them the right way.”

UCI president David Lapppartient said: “We’ve seen a superb performance. Well done to Victor, who had an amazing ride and showed his consistency from the start right through to the end of his attempt, a key factor in his success.

“Congratulations also to his team, Lotto Soudal, and to Golazo, who gave Victor the support he needed and created a quality event around him, not least in live-streaming it for fans to enjoy.

“This latest feat is excellent news for our legendary event, which has attracted renewed interest among both male and female riders since we changed our rules.

Campenaerts undertook his successful effort on a Ridley track bike custom made for the attempt and named “The Flying Moustache” by the Belgian public following a poll by broadcaster Sporza (Fietsy Van Fietsface wasn’t an option, we’re guessing).

The brand is owned by Belgian Cycling Factory, whose CEO Joachim Aerts said: "Without a doubt the biggest performance ever on a Ridley.

"I can't describe how proud I am Ridley helped Victor setting this record. What an athlete!”

Since the UCI changed the rules for the Hour record in 2014, there have been 19 attempts on the men's, only six of those successful, including today's.

The first attempt under the new rules was made by Jens Voigt in what would be his final competitive ride before retirement, the popular German setting a distance of 51.110 kilometres at the Velodrome Suisse in Grenchen in September 2014.

The following month, the Austrian rider Matthias Brandle rode 51.852 kilometres at the World Cycling Centre in Aigle, holding the record until Australia’s Rohan Dennis surpassed it in February 2015 by riding 52.491 kilometres at the Velodrome Suisse.

The following two successful attempts both took place in Great Britain – Alex Dowsett setting a distance of 52.937 kilometres in Manchester in May 2015, smashed just five weeks later by Wiggins with his 54.526 kilometre ride at Lee Valley VeloPark.

Today’s attempt was the 11th since then, with the Danish 19-year-old Mikkel Bjerg riding 53.730 kilometres in Odense last October, setting a new national record.