A shiny Charge with a rare-as-hen's-teeth Shimano Alfine 11 speed hub plugged in.....
by dave atkinson

Oooh, exciting. One of the most viewed pages on road.cc over the last year has been the Alfine 11 car park test, it seems everyone's talking about Shimano's new hub. Talking about it they might have been but riding it they certainly haven't; the things are like hen's teeth. But now we've got one.

Massive thanks to the chaps at Charge who have sent us a Charge Mixer 11 to play with. In fact they've sent their only one, as thus far they've only got one of the hubs. But one's enough to have a go on, so we will. 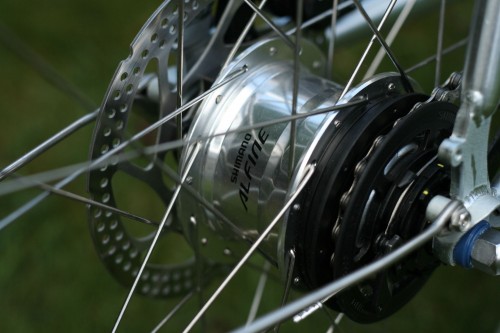 In case you haven't read about the Alfine 11 hub, it's a very different beast to the eight-speed hub. The most obvious change is the increase in ratios, both in number from eight to 11 and in range from 320% to 400%. But the most important changes are internal. Shimano have dropped the grease-based workings of the old hub and started from scratch, building the new unit with oil-bath internals that should make maintenance easy and dramatically increase the running life of the hub. It's a bit lighter too, and the Rapidfire shifter is the right way round – as in the same as a derailleur system – and allows you to shift up two ratios at a time. 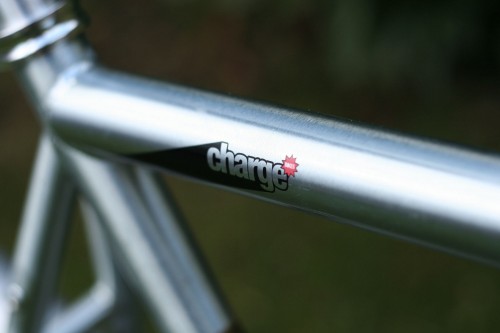 Enough about the hub, what about the bike it's built into? Well, it's a looker alright. The Mixer is built from the same Tange tubing that Charge use widely across their range and it's finished in a stainless-esque silver. You get a matching fork and the bottom bracket is asymetric to allow for proper chain tensioning. There's a raft of Charge finishing kit, all solid stuff including their own brand hubs laced to Alex rims and wearing Conti Sport Contact 32mm tyres. Shimano's 486 hydraulic discs take care of the stopping. 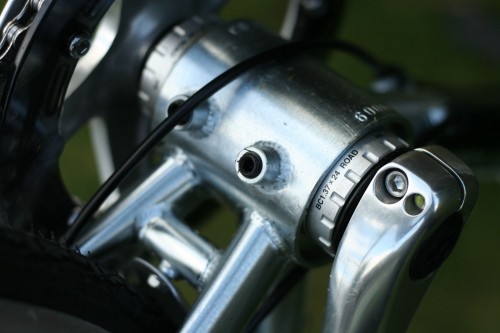 We'll be putting the Alfine hub through its paces as much as we can in the next few weeks and when we've got enough riding in, we'll let you know what we think. Certainly if it lives up to expectations it'll be a shoe-in for high-end commuter bikes, but will it be able to make the crossover to purer road disciplines? we'll see... The Charge Mixer retails for £1,229 and you can find out more about it from the Charge website: www.chargebikes.com