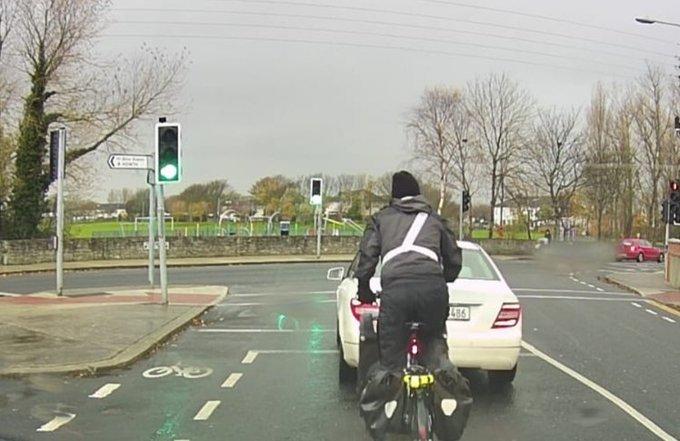 A Dublin taxi driver who tweeted a picture this morning criticising a cyclist’s road positioning got a bit more than he bargained for – when the very same cyclist replied to his post with footage of the same incident shot from the rear-facing camera on his bike.

The original picture from Twitter user @Taximattdublin showed the cyclist ahead of him, riding primary as he prepared to turn right at a set of traffic lights.

The cabbie, in a reference to the adjacent cycle lane on the left hand-side of the road, wrote: “Now if only there was somewhere safe for this cyclist to cycle … ”

i stay central there because some drivers (yourself included) cant seem to keep out of the cycle lane as they go round the bend.

glad you still made the light while tweeting, although traffic wasn't moving so it didnt make much difference#FaceItDown pic.twitter.com/iJ2AuXuLbp

In his reply the cyclist, @AlanDub13, said: “This is awkward,” adding a laughing emoji.

“I stay central there because some drivers (yourself included) can’t seem to keep out of the cycle lane as they go round the bend,” he explained.

“Glad you still made the light while tweeting, although traffic wasn't moving so it didn’t make much difference.”

Indeed, the video shows that after turning right, Alan was able to swiftly move past the queue of motor traffic that had built up after the junction.

In what turned out to be a good-natured exchange by the usual standards of interaction between cyclists and taxi drivers on the social network, TaxiMatt said, “I take your points on board” and added that he had been using a dashcam and had pulled in safely to tweet the picture.

I take your points on board.
The Merc shouldn't have been in the cycle box.
I did not tweet while driving as the time of tweet was 9:24, timestamp on video is 9:21. Plenty of places for me to pull in and tweet safely.

I didnt take the picture while driving, it's called a dashcam

He added: “I definitely have gathered more insight as to why a cyclist would position themselves here and I thank Alan for posting his side.”

It's fair to say though that a number of Twitter users took some delight in the cabbie been pulled up on his original tweet thanks to the video provided by the very cyclist he was criticising.