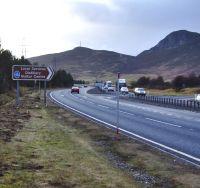 Updated: Campaign of disruption mooted in A9 crossing dispute

Direct action is being planned over a decision by Transport Scotland not to provide a safe crossing point for cyclists, walkers and horse-riders on an upgraded stretch of the A9.

Ruaridh Ormiston, a local riding stables owner, says he will block traffic by riding a horse and carriage up and down the road in order to draw further attention to the issue.

He is the prime mover behind the campaign to install an underpass at Crubenmore where the main road up the east side of the Scottish Highlands is being made dual carriageway in a £10.4m upgrade scheme.

The issue is of particular concern to him as the installation of an unbroken central barrier at a traditional crossing point means he will no longer be able to access General Wade’s Military Road to the east of the A9.

Similarly cyclists accessing the historic trail who were able to cross what was previously single carriageway with relative ease at this point, would in future be forced to make a dash for the central reservation, lift their bikes over the barrier and make a second dash to get to the other side.

Transport Scotland, the body responsible for building and maintaining Scotland’s major highways, says that extensive consultation was undertaken in the four years leading up to the start of construction and that a safe crossing point can be found to the north of Crubenmore.

The organisation maintains there is no public right of way at the location in question, a point which is disputed by campaigners who say the authority may ultimately be forced to install an underpass after the project is completed, but at much greater expense.

The A9 is one of the most dangerous roads in Britain and upgrading it to dual carriageway should make it safer, but campaigners say those safety gains for motorists will be made at the expense of other users if a relatively inexpensive underpass is not installed during the current construction phase.

“I’m quite happy to ride up and down here with horses every day of the week and bring the A9 to a standstill,” said Ruaridh Ormiston “If that’s what we have to do to get people’s attention, we’ll do it. For the sake of a few thousand pounds to put a pipe [underpass] under the road, they are going to put all non-vehicular users at risk.”

"The Crubenmore dualling scheme is designed to improve the operational performance and level of safety on the A9. The Right of Way at Etteridge does not extend across the A9 and there has never been, at any time, a crossing facility across the A9 at this location. There are safer crossing points to the north of Crubenmore.

"The feasibility of constructing an appropriate underpass in the vicinity of Etteridge which would meet the strict requirements of accessibility legislation and avoid major works to the adjacent A9 and Highland Mainline Railway has not been established. If this could be achieved, additional land would be required and the estimated cost would be between £650,000 and £720,000.

"There are viable underpass crossings located further north on the A9 between Crubenmore and Kingussie. Transport Scotland and the Cairngorms National Park Authority are working together to develop a safe access strategy to provide walkers, cyclists and equestrians with advice on suitable routes."