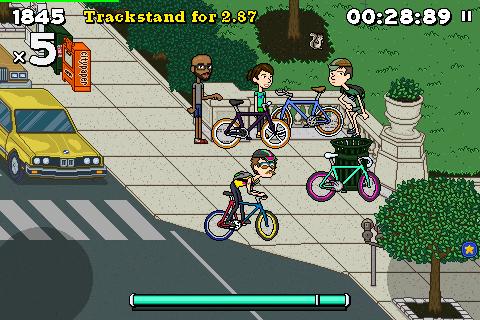 A new video game arriving at the Apple App Store later this month lets iPhone and iPad users take on the role of a fixie-riding hipster cycling through the streets of Philadelphia, with features including custom bike building, trackstanding – or dodging the traffic if red light jumping’s more your thing – and avoiding getting doored by motorists.

Appropriately, the game, called Hipster City Cycle, is based on retro-style pixel animation with a rather infecious old skool video game soundtrack to match, and will be available to download from May 19th.

According to its designers, “Your mission is to liberate hipster Binky McKee from the shackles of employment, and help him achieve his humble dream of becoming a penniless cycling legend.

“Customize your fixie, and take to the streets as you daringly weave through downtown traffic, challenge rival cyclists, chow down on a few cheesesteaks” – we are in Philly, remember, “and track stand your way to city-wide fame.”

A YouTube video of the final version has just been released and gives a taster of what’s in store from the game, which combines a retro feel with up-to-date, intuitive conrols.

The game has been in development for two years, with the pixelated backgrounds that faithfully reproduce some of the city’s neighbourhoods designed by Keith McKnight, while the chiptune soundtrack was composed by Patrick Todd and Joey Mariano.

While playing the game, you can earn medals through speed, style and skill, unlock 22 different bikes with interchangeable wheels, pit yourself against friends through Apple’s Game Center, and – we like this one – “party your way through Binky's entire trust fund.”

As for why Philadelphia was chosen as the setting rather than cities such as New York or San Francisco, the developers explain: “The team behind Hipster City Cycle are all friends who met while in school in Philadelphia.

“Shortly after joining forces to create a game, we concluded Philadelphia would be perfect star for our first project.

“The city has proven to be an ideal inspiration, underappreciated yet iconic, sprawling yet familiar, ugly yet beautiful, and most important, its a city overflowing with character.

“Turns out Philly is also the home of a burgeoning indie game scene, so we've set out to put our fair city on the map as a place where cool shit happens.”

You can follow Hipster City Cycle on Twitter to keep up to date with news of the launch.

More of the game’s features are shown in this longer video based on an earlier version, together with a talk-through by its creator.