Not due to hit the streets for a while yet, but here's a very cool work in progress
by Tony Farrelly

In Italy at the mo… it's raining since you ask. Anyway, we're getting a look Ba:ckstage at Fi'Zi:k. There's lots more interesting stuff to come, but to whet your appetite here's a new shoe in the pipeline –the full-on race tool that will be the R3 SL.

With the R1 and the R3 launched last year, Fizik (yeah, I'm back to the lazy spelling) gave us shoes designed for comfort and performance with the R1 taking things a notch further with a customisable insole. With the R3 SL designer, Steve Delacruz aims to take things a notch further again for those riders focused on all out performance and adding up those incremental gains to make a difference when it comes to powering over the line in first place.

So, as the name suggests, lower weight is the name of the game here. This is a prototype model and Steve was not that keen on quoting figures yet – partly because his experiments with materials for the upper make him think that there is more weight to be shed yet – but as it stands the prototype is reckoned to be around 35g lighter than the standard R3 which is itself 20g lighter than R1 range topper – due to their being more microfibre and slightly less kangaroo leather in the upper. 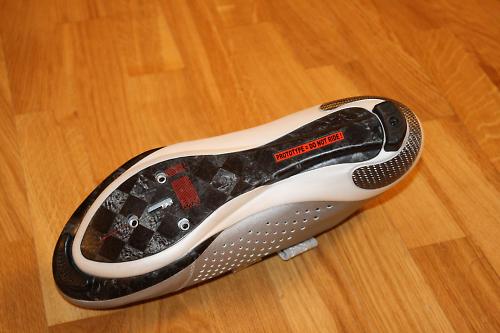 The shoe itself is constructed from a synthetic upper with a three-strap retention system. Although Fizik love leather, even kangaroo hide can't compete when it comes to shedding grams. Possibly the sexiest bit of the shoe though is the carbon sole. Made from 15K weave carbon, Steve is pretty sure that no-one else in the bike industry is using such a material, (usually found in Formula 1 and aerospace applications) certainly not in bike application. What it brings to the party is lightness and stiffness.

Although performance is what the R3 SL is all about, Steve was adamant that comfort would not be sacrifced in the mix. No details on pricing as yet, or indeed when it will be in the shops, but we're guessing some time in 2012 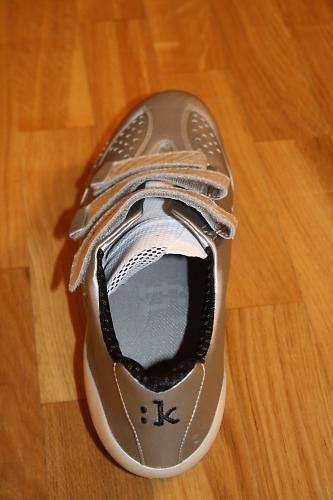 For what Fizik hope will be an ultimate performance boost, those buying the R3 SL will be able to fit Fizik's custom insole which as of today is being rolled out as a standalone aftermarket product. We covered the technology in our report and video on the launch of the R1 shoe at Eurobike, but essentially what it gives is a footbed moulded to the shape of your foot that provides increased levels of comfort and support with the idea that you can then ride harder for longer.

The more your insole supports your foot the better aligned it will be making for greater efficiency of movement and better performance. The insole was developed in conjunction with French specialists Sidas and their Flash Fit technology is used to heat and mould the insole which has as its major component recycled wheat.

1
Police officer caught on camera telling cyclists to ride in single file to be given "education around traffic offences"
2
Footage of cyclist's encounter with mountain goat "on steroids" goes viral
3
Driver "used bus as a weapon" against cyclist, loses appeal over sacking
4
‘Dangerous cycling is not a priority,’ police force says
5
Cyclist bitten by dog… and then abused by owner
6
Why was Mark Cavendish riding with Lance Armstrong this week?
7
Five-year-old boy killed after van driver knocks him off bike
8
Want the “fastest socks on the planet”? They’re yours for €1,000 + more tech news from Campagnolo, Rapha, Van Nicholas...