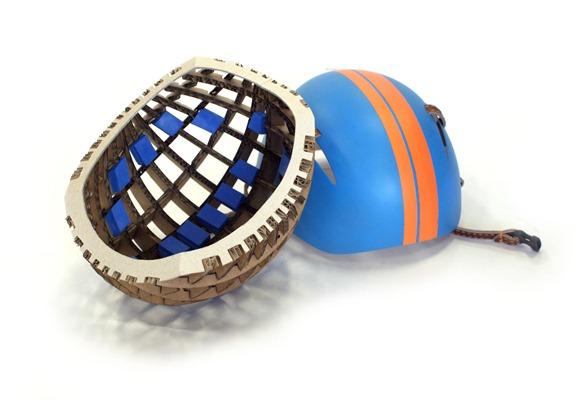 A London design student has devised a cycle helmet based on a cardboard frame that he claims is able to absorb four times the impact of a standard helmet while also being recyclable. Anirudha Rao believes that as well as providing greater protection for cyclists who own their own bikes, the helmet – called the Kranium – could also prove useful to operators of bike hire schemes.

Rao, a postgraduate student at the Royal College of Art, unveiled the helmet made its debut at the London Cycle Show last October, and has been developed with the help of a £20,000 grant from the James Dyson Foundation.

The designer says: “The ribs of the structure have been designed to accommodate movement in some places where as it remains perfectly rigid in some areas. Thus during a crash the force peak of the impact is absorbed by the ribs tending to flex and de-flex. The remaining amount of energy is then absorbed by the crumpling nature of the corrugated ribs.”

Carlton Reid of the trade focused website BikeBiz filmed Rao talking about his invention at the Cycle Show last autumn, and there's also a video from Bike Republic that shows the Kranium being subject to a drop test together with a standard, off-the-shelf helmet.

An acrylic compound renders the cardboard waterproof, and it can be adjusted to provide an exact, snug fit to the wearer’s head.

As for bike share schemes, which have struggled in Australia for example due to the compulsory helmet laws there, Rao hopes that a quick assembly version of the helmets might be sold via vending machines and recycled after use.

The Independent reports that the Kranium has already been licensed by several cycle helmet manufacturers, bringing it a step closer to be seeing on the streets some time soon.

1
Near Miss of the Day 848: An overtake worthy of the 'must get in front' title
2
You've heard of a coffee ride - now Canyon uses real arabica coffee for new Speedmax CF SLX finish
3
Murder suspect in deaths of father and son killed while cycling released on bail
4
Fancy a 3D-printed saddle custom-made for your butt? Plus more tech news from DT Swiss, Giant, 3T, Chris King, Classified, Stages & more
5
Specialized closes inclusive women’s cycle clothing brand Machines for Freedom
6
Victory claimed for harassment campaign by “mob of decent people” as helmet cam cyclist deletes Youtube and Twitter accounts
7
Large vehicle may have crashed into controversial bike hangar, council says
8
“People need to see justice being done”: CyclingMikey says camera cyclists suffer online abuse because some motorists “feel they have the right to drive how they want”