Brand known for outdoor-market head torches and even more for its compasses now offers bike lights, too
by nick_rearden

Swedish outdoor brand Silva that for many years has held a legendary reputation for its compasses and more recently built a new identity for the head torches used by hikers, fell runners and wild-water canoeists is this week launching a range of pure bicycle lights based on the latest LED technology.

The headline grabber is a 1,000 lumen - well, 1,030 to be precise - front light called 'Singletrack, which, as the name suggests is intended for proper pitch-dark tree-dodging while mounted on either a handlebar or helmet bracket, both of which are provided.

The ABS-moulded unit weighs 135 grams and contains 5 LEDs running on a 6.6Ah 7.2V Lithium-Ion battery pack, with a claimed life of 20 hours, 7 hours or 2.5 hours depending on whether Wide, Minimum or Maximum setting is applied. Price will be £299.99 when stock reaches the shops towards the end of the year. 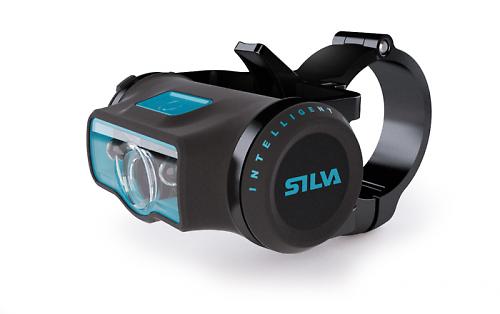 Likely to be more interesting for a far wider range of commuter cyclists, though, is the Vélo a 3-LED unit with an interesting extra red bulb which means it can be used as a high-output rear as well. With three self-contained AAA batteries, the light is claimed to put out 110 lumens with run times of 90, 48 or 30 hours depending on setting, which sounds pretty promising to us. The price at £49.99 also seems competitive versus similarly specced models; it just remains to be seen how they test and there are review sets winging their way to us.

In addition there will be small and simple 'Simi' front and rear safety lights, in a style designed to attach simply to 'bars and seatposts with a familiar-looking stretchy rubbery strap. £9.99.

Rear red version of Simi: both run for 100 hours in blinky mode or 24 on steady.