It's the London Bike Show next week so big anticipation of what will, and won't, be appearing...
by nick_rearden

We say 'inadvertently' because although no one official claims to know anything, the picture was posted with a title, that it is to be a flagship model for later in 2012 and is obviously a moody catalogue shot rather than a furtively-snapped journo camera-phone number. Anyway, it disappeared as quickly as it arrived but not before we screen grabbed it and very nice it looks, too. Unlike the current King range-topper we covered at Eurobike that is simply massive everywhere for stiffness, the new frame appears to make concessions to aerodynamics with red-highlighted ports making a point, we suspect, about internal cable routing for Di2 and EPS signal cables.

UPDATE: On 20th January De Rosa sent us some official pics, see below and the first four in the gallery. Something that will be at the London Bike Show starting next Thursday at the Excel Centre is a first Campagnolo EPS-equipped Wilier in the form of the Cento Uno SL model chosen over the Zero .7 we recently reviewed and which otherwise tops the range. Presumably this is because it's the frame that the Lampre-ISD professionals will be using in 2012 therefore making this as near as makes no difference the team bike. 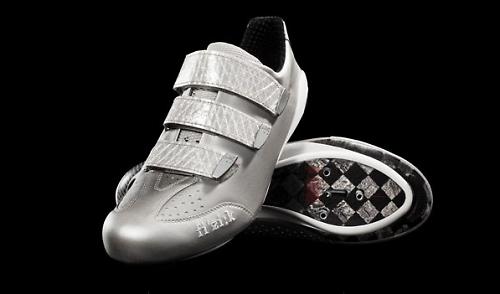 Fizik will be in London, too, with a new lighter 'SL' version of their existing carbon-soled R3 shoe. Also an interesting new saddle called Kurve with the most advanced carbon shell yet, they say, which both supports and flexes based on the clever layup of the carbon weave. There's also a revolutionary new one-piece cradle that is isolated from the saddle shell by interchangeable inserts based on rider weight and preference. The video below offers clues:

Syncros has a new owner

Scott Sports the fast-growing, all-round cycling equipment brand has taken one more step closer to a full portfolio of bike components by buying Syncros, a pure component name previously know for excellent mountain bike stems and seatposts. Syncros has had a patchy history with dabbles into road and triathlon parts in the past although the recent ownership up until this week by Ritchey and a concentration on mountain bikes hasn't hurt the reputation at all. So far there is only a new logo but we can expect Scott bikes in future sporting their own new brand's name on the stems, seatposts and who knows where else?

As our recent review of their Pocket Rocket rain jacket showed, the Altura brand is one of our favourites for veering towards the bargain end of the price spectrum while still offering good performance and, almost as important, looking as near to sensible as possible considering it's cycling kit. Now they have a new website and we applaud the first front page headline we saw, "Winter isn't all bad."

We've posted in the past about Dual Eyewear, a company from Boulder, Colorado that makes cycling glasses with a neat little 'reading glasses' area in the appropriate strength so that riders with ageing eyesight can properly see their computers, GPS, iPhones, whatever. The only problem was that, coming from Boulder, Colorado where never a cloud disturbs the perfect blue sky summer or winter, they were a little surprised when the call came back from certain areas for clear or contrast-improving coloured lenses. According to their Louis Viggio, it was "UK, Norway, and Portland; I wonder what these places have in common..?" The new clear or amber lenses for the open-framed SL2 model cost $19.95 per pair which means a pair of $49.95 SL2s with an extra pair of clear lenses and $11.95 shipping to the UK would cost about £51. Review in the works...

Talking of American imports, something even easier to ship from that side of the ocean are sets of self-adhesive clear vinyl protectors custom cut to suit the exact model and length of your exotic carbon cranks. Or indeed any other part of the bike since they offer crank kits and more comprehensive sets for a whole machine thereby offering some respite from scratches, rubs and minor collisions. A set of six crank covers, ie a pair plus spares, cost $11.99 with whole bike sets starting at $39. 'W' stands for 'Web' and it's the site where Lapierre customers can build their bike virtually including all the 2012 colour schemes and latest components which now includes all the wheels from Mavic, Zipp, Easton and Fulcrum as well as the expected groupsets from Shimano, Campagnolo and SRAM. A pleasant surprise for us while we'd been waiting for the FDJ-BigMat WorldTour launch was that the Lapierre W-Series site enabled us to 'build' the team bike for our 'Bikes of the UCI WorldTour 2012' series. Hoorah and only £4,900.