They'll be joined by Salsa, Surly, All City and Zullo on the Mosquito Bikes stand from this Thursday
by nick_rearden

Exotic frame makers Independent Fabrication, Lynskey and Moots from the USA as well as Pegoretti from Italy will be showing at the London Bike Show starting later this week, all on the stand of the London retailers Mosquito Bikes who have always made a big thing of their special imports. Slightly more down to earth will be bikes from Americans Salsa, Civia, Surly and All-City, too.

Mosquito have always offered some of the more glamourous imports from the four corners of the cycling world and the forum of the London Bike Show opening later in the week gives them an opportunity to meet some extra customers at Excel just down the road from their Essex Road store.

These days, as our earlier story about the planned expansion of Edinburgh Bicycle Co-operative explained, it's all about the differentiation as retailers strive to offer that certain something which attracts customers to their store rather than a hundred others and online.

Maybe it's because their particular part of Inner North East London has always been a thriving and competitive centre for cycling activity from commuting to the hardest of the hard-core racing but Mosquito had to carve a distinctive niche for themselves right from the beginnings in the early 80s. It's fair to say that many of the brand names well-known now in modern cycling households got an early showcase in Mosquito's Islington store with Trek and Marin being two brands that spring to mind.

Anyway, here's a showcase of our own showing nine of the bikes showing on Mosquito's stand number LB 430 at Excel, starting this Thursday. We'll see you there. ...and there's a whole family of them. 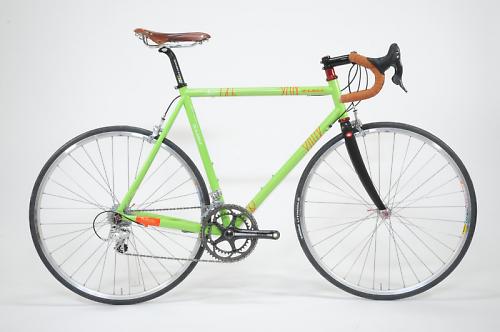 Surly Crosscheck: the nichiest of brands but famously good value.